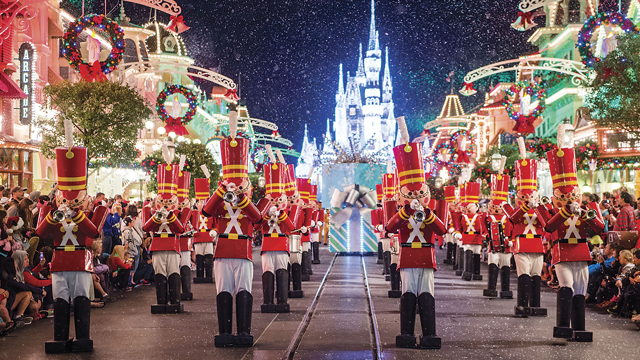 No disrespect to the other holidays, but Christmas is my favorite time of year. I love it all, from the sparkling lights to Christmas trees adorned in tinsel and decorations. But what I love the best is the spirit of the season – the magic and the warm, cozy feeling that brings people together.

Every city and town has its own charm at Christmas, but I’m not sure that any place does Christmas as beautifully as Walt Disney World Resort. My family makes regular pilgrimages to Disney during the holidays because it fills us with sheer joy. It helps me see Christmas through the eyes of a child.

And Disney knows how to deck out the parks for the holidays! 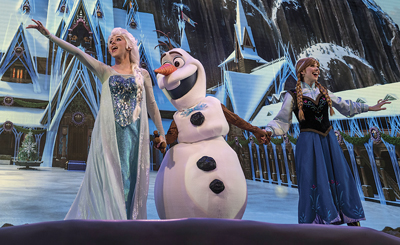 Many of the people creating the magic work in Holiday Services – a special Disney department – which prepares for the holiday season 365 days a year. Disney elves can spend more than 120 hours decorating just one Christmas tree at one of the many resorts on the property.

The holiday team provides décor for 780 sites throughout the resort. Installation begins Halloween night and is finished by Thanksgiving. There are twenty-nine custom-created iconic trees, ranging from fifteen to seventy feet tall – the tallest is located at Disney’s Contemporary Resort. It has 16,000 lights and more than 200 custom ornaments.

In the parks, Magic Kingdom is decorated with 590 garlands (measuring a total of 5,188 feet) and forty trees. Disney’s Animal Kingdom Lodge is home to a 45-foot tree featuring authentic African decor and reproductions of traditional African masks. Each resort and each park has its own share of festive pixie dust sprinkled liberally for the holidays. Here’s a closer look at the highlights … 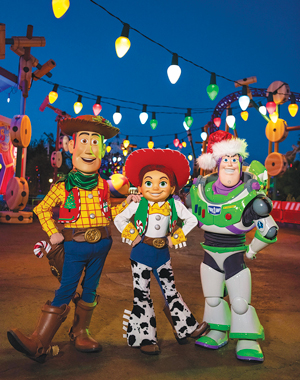 According to George Kalogridis, president of Walt Disney World Resort, Toy Story Land is the result of an amazing progression. “What began in the imagination and took shape at Pixar Animation Studios is now brought to life as an actual place where you can step into this iconic story,” says Kalogridis.

My daughter, Angela, her fiancé, Andy, and I visited Toy Story Land this summer when it opened. The immersive experience starts when you walk past 20-foot Sheriff Woody, who tips his wide-brimmed hat to passersby. Like Woody, everything in the area is huge. It’s only you that seems small, like one of the toys in the film’s iconic toy box.

And that’s exactly the point of this new land. You’ve just stepped into Andy’s – talking about the Disney character here and not my daughter’s fiancé – backyard where giant building blocks, Tinkertoys, and Scrabble tiles are scattered about. You’ll also find Woody, Jessie, Buzz Lightyear, and Slinky Dog, as well as a slew of green army men who march around the park and will occasionally toss a beach ball your way or ask you to stand in formation with an affable, “Straighten up soldier!”

In Toy Story Land, the first thing my daughter and her fiancé did was hop in line for the new Slinky Dog Dash, a family-friendly roller coaster ride, inspired by the classic 1940s Slinky toy. The coaster bends and twists Slinky Dog’s coils around curves, hills, and down drops. The colorful ride zips around and above Toy Story Land. Keep your eyes peeled and catch a glimpse of the new Star Wars Land that is scheduled to open in late fall 2019.

The ride is a first for Disney when it comes to the resort’s coasters. Instead of one launch, Slinky Dog has two – one at the start point and one midpoint in the ride. When the second occurs, the coaster stops, reverses a few yards and then darts you through a series of rings, complete with sound effects and spinning lights. If you go during Christmas, listen for sleigh bells during your ride. Thanks to FastPass – a definite must for this newer ride –  my daughter and her fiancé rode this one multiple times.

The second new ride in the land is Alien Swirling Saucers, again straight from Andy’s imagination. The little green aliens swirl about in toy rocket ships, and you get to ride along. During the holidays, the ride features holiday songs so you can sing along as you swirl through space.

My favorite ride in all of Disney World Resort is Toy Story Mania! where you zip through a variety of carnival games. I’ve yet to be the highest scorer in my car, but fingers crossed, one day it will happen. The entrance to the ride has been reconfigured and moved from the former Toy Story area in Hollywood Studios to its new home in Toy Story Land. Now larger than before, it is still one of the most popular in Hollywood Studios, so be sure to secure your FastPass. 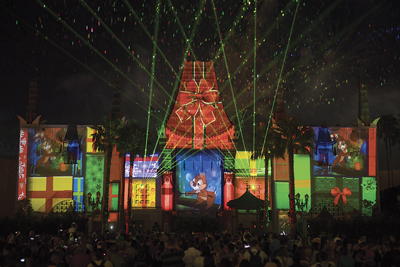 If you get a pang of hunger while you’re in Toy Story Land, stop by Woody’s Lunch Box. You’ll find  s’more French toast – think chocolate ganache and marshmallow-stuffed French toast topped with graham cracker crumbles – and a gourmet grilled three-cheese sandwich. This is a sharp cheddar cream cheese layered with provolone and cheddar, wrapped in garlic butter-grilled French bread.

The Christmas magic continues in Hollywood Studios during Sunset Seasons Greetings. That’s when Mickey and Minnie Mouse, Olaf, and other Disney characters share their favorite seasonal stories through the magic of projections that transform Hollywood Tower Hotel into scenes of the season – this year with new laser effects. And who knows? It may even be cold enough for snow to twinkle in the twilight.

Out of all the parks at Walt Disney World, Magic Kingdom is my daughter’s all-time favorite. It isn’t a real trip to Disney in her eyes without taking photos of Cinderella’s Castle. And during the holidays, it’s a Frozen sight to see as the icy castle sparkles, thanks to Queen Elsa’s special touch. Of course, Anna and Elsa, along with the handsome Kristoff and the lovable Olaf, visit the castle for their holiday show. On our must-do list this time of year is attending Mickey’s Very Merry Christmas Party. The specially-ticketed event has limited attendance so the park is not quite as full as it would be normally. Mickey’s Once Upon a Christmastime Parade happens each night the event is held. The parade really gets you into the spirit of the holiday – think snow flurries and Santa – but be advised, parents: You need to stake out your spot very early to get a good view! If you’re not into parades, this is the perfect time to scurry off to ride the rides that are open or check out yet another holiday show – A Totally Tomorrowland Christmas. The festive nighttime programming also features Mickey’s Most Merriest Celebration stage show. You may want to stick around for some complimentary cookies and cocoa. And, don’t forget the exclusive showing of Holiday Wishes fireworks. 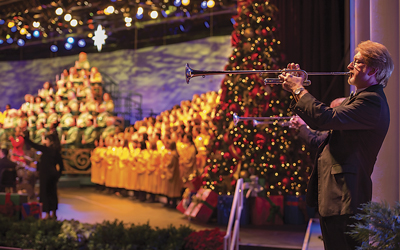 Traditions from Around the World at Epcot

Costumed performers take center stage in each of the eleven countries – from Mexico and Germany to Italy and England – represented in Epcot’s World Showcase to bring holiday traditions from their home countries to life through music and stories. It’s a wonderful opportunity to learn how each country celebrates the season.

My favorite holiday tradition at Epcot’s World Showcase is the Candlelight Procession, the retelling of the nativity and the birth of Jesus. The show features a variety of celebrity narrators accompanied by a 50-piece orchestra and a choir. Choirs come from around the state and beyond to perform traditional holiday hymns and carols. Performances usually run three times each night. This year’s celebrity narrator lineup includes Helen Hunt, Alfonso Ribeiro, Neil Patrick Harris, and Whoopi Goldberg.

One of the best ways to ensure seating is to buy a Candlelight Processional Dining Package. You can have lunch or dinner at one of the selected restaurants, which allows you to be one of the first guests into the seating area. You can check this out and make reservations at disneyworld.disney.go.com. 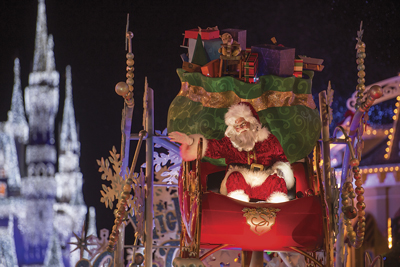 This is the last year to experience Epcot’s nighttime fireworks show,  IllumiNations: Reflections of Earth, and I’m told there will be a special holiday finale. A new Disney experience will replace the show next summer when IllumiNations concludes.

Disney Springs is as important to our vacations as the parks. It’s great for shopping, dining, entertainment, and people watching. It’s also the largest of all of the decorated Disney locations, with more than two thousand pieces of individual holiday décor, including a 45-foot Christmas tree. Each piece of décor was custom designed to fit the classic Florida town theme at Disney Springs. 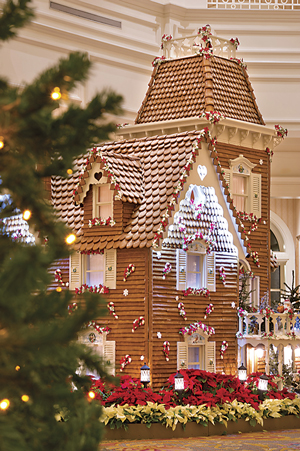 We always try to check out the various resorts of Disney World to see how they’ve been decorated for the season. Disney’s Grand Floridian Resort & Spa is a must-see with its life-size holiday gingerbread house, made from more than 10,000 pieces of gingerbread requiring 560 hours to construct – 400 hours to bake and 160 hours to decorate. The house is also the location for The Bake Shop, which uses a classic Austrian gingerbread recipe to make its small gingerbread houses, ornaments, and cookies.

Is there any wonder Disney World is my favorite hangout? What more could you want in a family destination – at Christmastime and all year long? Happy holidays everyone!