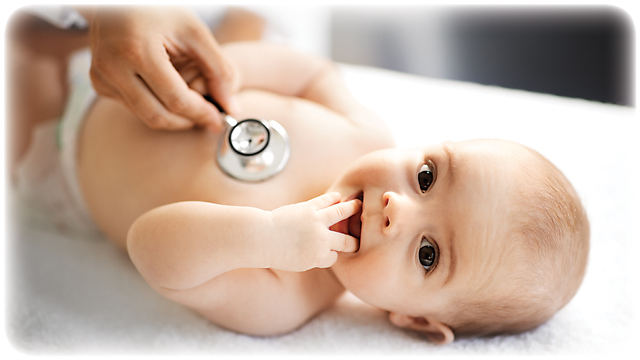 Breathing is the most essential element of life, so it makes sense that parents are concerned when their baby’s breathing patterns seem out of the ordinary. Many breathing sounds or noises are variations of normal infant respirations, but some may need monitoring, and occasionally, medical intervention is recommended.

Our babies certainly don’t make it easy on us. Typical newborns often have some degree of irregular breathing – breathing faster at times, taking long pauses between breaths, and even making occasional unusual sounds. And that’s when all is well.

From the beginning, the way a baby breathes is different from an adult:

• Babies breathe more through their nostrils than their mouths. Newborns are actually obligate nasal breathers for their first three months of life. They have not honed the reflex to breathe through their mouths, unless they are crying, of course.

• In babies, the chest wall surrounding the lungs is soft and pliable, in comparison to the hard, protective bones of an adult’s ribs.

• It is not uncommon for babies born prematurely or delivered via C-section to have some residual amniotic fluid in their lungs right after birth.

What is normal newborn breathing? It varies, and that’s the challenge. Typically, newborns take thirty to sixty breaths per minute, but that rate can slow down to twenty times per minute while sleeping. At six months, babies breathe about twenty-five to forty times per minute. An adult typically breathes around fifteen times per minute. Typical newborns can also take rapid breaths and then pause for up to ten seconds at a time. All of this is very different from the breathing of an adult or older child, which is why it’s understandable that parents might be confused or alarmed.

Why Is My Baby’s Breathing Noisy?

Within a few months of life, most irregularities of newborn breathing resolve themselves. But for persistent or acutely worrisome breathing sounds, it’s helpful to know more about what the causes might be.

Noisy breathing can sound like it’s coming from any part of the airway in a baby. The airway includes the nose, mouth, throat, larynx (or voice box), trachea, and lungs. A noise will occur when there is a narrowing of the airway. Normal airflow is considered smooth, but when there is a collapse or limitation, the airflow becomes turbulent or noisy.

There are several typical noises to consider in order to identify the location of the airway issue. One type is stertor, which implies that the noise is created in the nose or back of the throat. It is typically low-pitched and sounds like a congested nose or noisy snore. Stridor is a smoother-pitched noise and occurs around the voice box area, typically when a baby inhales, but it can also happen during exhalation. And finally, wheezing is a high-pitched noise that occurs when a baby exhales. This is related to narrowing or spasm of the lungs.

Infection – viral or bacterial – remains the most common cause of swelling of the tissues in the airway. This can be anything from a cold, which causes congestion in the nose and makes a stertorous noise, to a virus, which affects the area below the voice box. Commonly known as croup, this noise is distinctively stridorous.

Weak or floppy tissues in a baby’s airway can also cause stridorous breathing. The more common and typically not worrisome condition is laryngomalacia. The baby makes a rough noise during inhalation, but not during exhalation. Tracheomalacia is much more rare and involves significant collapse further down in the airway. A baby with tracheomalacia will often have more issues than noisy breathing.

Swellings, growths, or narrowings can also lead to stridorous noisy breathing. Subglottic stenosis, or a smaller than typical airway, can occur randomly or as a result of an infant having been on a ventilator after birth. Subglottic cysts, hemangiomas, and voice box papillomas can also occur and limit airflow, making breathing noisy. These are rare diagnoses.

Spasms of the lower airway can certainly make for loud wheezing breathing sounds. This could be the result of reactive airway disease, like asthma, or a foreign body – think bead or peanut, making its way into the lungs.

Evaluating noisy breathing in a baby is always individualized, but there are some basic points. A pediatrician will start with a history and general exam. Was the baby born prematurely? Are there other ongoing health issues? Was the noise present at birth or did it develop later? How long did it take to develop and is it persistent or intermittent? Is the baby eating and gaining weight or are feedings a challenge? Is the noise worse when the baby breathes in or breathes out? Are there pets or siblings in the home?

Depending on answers to the above questions, your pediatrician may consider an airway X-ray and refer you to an otolaryngologist with pediatric experience. Your otolaryngologist/ENT physician will often have an in-office video laryngoscopy set up to allow for a thorough examination of the upper airway during the first office visit. At times, if there are further concerns, a diagnostic bronchoscopy examination in the operating room under anesthesia is occasionally needed.

In summary, noisy breathing in babies is always going to trigger some anxiety for families even though it’s very normal. Never hesitate to reach out to your doctor’s office when breathing issues are concerned. However, do try to slow down and determine if your baby is in distress. Attempt to identify your baby’s typical breathing pattern so you can differentiate when it’s noisy and atypical. Consider using a cellphone to capture various moments of the noisy breathing. If you are concerned, then an evaluation with your baby’s doctor is needed. Remember, most noisy breathing in babies is harmless and can be managed with minimal intervention after the diagnosis is clarified. 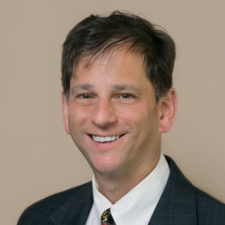 Robert Brager, MD, is an otolaryngologist at Virginia Ear, Nose & Throat. He see patients at the West End and Hanover locations, is married, has three daughters, and is a sports enthusiast.