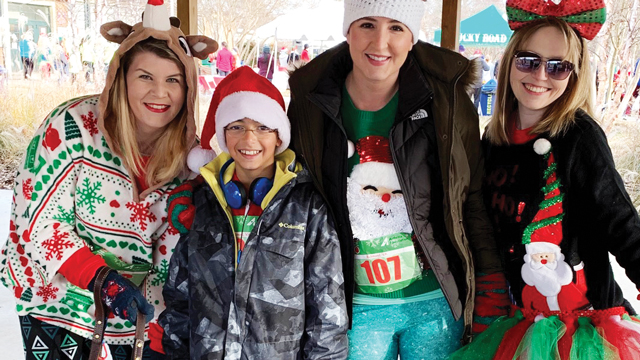 Be a Champion of “Yes”

Use promo code RVAJBR to save $5 on your
registration for the 19th Annual Richmond Jingle Bell Run.

The summer before she turned two, Reagan took her first steps. They were small and shuffled, and she resembled her grandmother – slightly hunched over and slow – but she was walking. At the age of three, Reagan stopped trying to go down stairs. Her mom said she began waking up “stiff and sad.” Reagan’s parents took her to an orthopedist, and it was then that the doctor thought she might have juvenile arthritis.

Lily’s story is similar to Reagan’s. In the months leading up to her third birthday, Lily’s parents noticed that in the mornings, she wouldn’t put weight on one of her legs. Her parents said she wanted to be carried almost all the time. After months of doctors’ appointments, Lily was finally referred to a rheumatologist.

When you think of arthritis, you usually think of your grandparents – not your children. This is the mindset the Arthritis Foundation is working to change. Arthritis is the number one cause of disability in the United States, affecting more than 54 million people; 300,000 of them children. In Virginia, that equates to more than 1.6 million adults and over 7,200 children. Arthritis is an informal way of referring to more than one hundred types of joint diseases. Juvenile idiopathic arthritis (JIA) – the kind of arthritis Reagan and Lily live with – is one of them.

The past few years haven’t been easy for Lily and Reagan and their families. Both girls have undergone steroid injections and tried numerous medications. Some weeks are better than others, their parents say, and family and friends have been instrumental in their battles against arthritis. Whether it is big brother Aiden shaking Lily’s legs after every shot because it helps with the pain, or a neighbor picking up one of Reagan’s three sisters from an activity so Reagan’s mom can take her to a doctor’s appointment, the families have developed strategies to manage the challenges of life with chronic disease.

Lily’s parents, Tera and Ryan, are her biggest supporters, and as a family, they have become advocates, volunteers, and event participants with the Arthritis Foundation of Virginia. “Lily has the biggest heart and cares so much for others,” says Tera. “She is truly the strongest person we know. We have no idea what the future holds for our little superhero, but we know that she was given this struggle so she could use it to make a difference in the world.”

At both the national and local level, the Arthritis Foundation is investing millions of dollars in outreach and collaborative research that advances

prevention, care, and a cure for children and teens with rheumatic diseases.

In Richmond, Executive Director Laura Boone says the Arthritis Foundation’s tools and resources help more children “say yes to making life better,” which is the Foundation’s mantra for families with kids who have arthritis. For Lily and Reagan
and their siblings and parents, just meeting other children and families who know what they are going through is a challenge.

“Explaining that your child has arthritis is often met with a quizzical expression and the response of ‘Really?’” says Boone.

The Virginia chapter of the Arthritis Foundation addresses that challenge by hosting two family days: one in Virginia Beach and one in Richmond. Each event is designed to provide a safe and secure experience for families and includes a panel discussion with healthcare providers for parents and fun activities for the children.

According to Boone, another social and learning opportunity for children comes with summer camp. A partnership with Camp Holiday Trails in Charlottesville provides a dedicated week for kids with arthritis to enjoy horseback riding, swimming, archery, and other traditional camp activities. “The mission of the camp is to create a community that empowers children and teens with medical needs to thrive,” says Boone.

The Arthritis Foundation of Virginia hosts events throughout the year to create awareness and to help kids like Lily and Reagan attend camp. Last summer, Lily’s first-ever week at camp was life-changing according to her parents, as she was surrounded by other kids who face many of the same challenges she does. “It was very empowering for her,” says Tera.

Boone says whether or not your family is impacted by rheumatic disease, there are ways to get involved and support this community.

“There is something for everyone! You might raise funds by running or walking in an event, volunteer with the Arthritis Foundation, or simply get to know someone with arthritis,” Boone says. “If you want to help families facing health challenges in our community, keep your mind open to their experiences.” 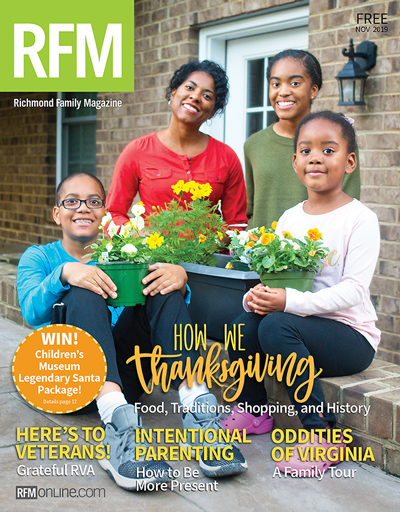