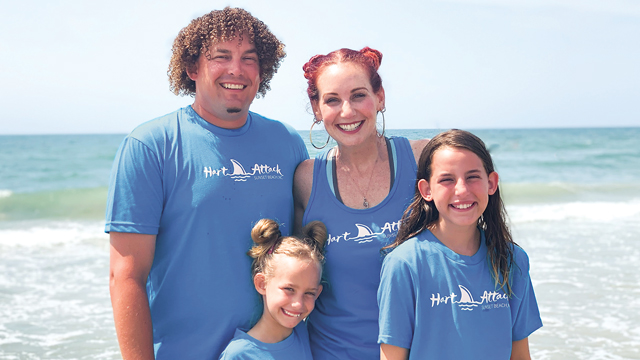 It was a gorgeous sunny day for families at Sunset Beach, North Carolina. Last July, Melissa Chase and her two daughters, London and Ruby, ten and seven at the time, were playing in the ocean when Melissa felt something rubbery slide between her legs and knock into her. That knock, one she won’t forget, was from a small shark poised to bite.

“I didn’t get a chance to react before it clamped down. It was the worst pain I’ve felt. I was suddenly sick to my stomach,” says Melissa, radio guru and co-host of Play Mornings with Melissa and Jack on 103.7.

Melissa felt panicked as her first thought was to get her kids out of the water safely. To keep from scaring her daughters, she yelled out that there were crabs in the water and that the girls should get out immediately.

When a shark attack is unprovoked, it can take one of three forms: hit-and-run attacks when the shark mistakes the movement of humans for those of normal food and fish; sneak attacks in deeper waters; and bump-and-bite attacks when the shark bumps the victim with its head or body before biting, per the Florida Museum of Natural History.

The chances of dying from a shark attack are slim when compared to other risks, according to the National Safety Council, the CDC, and the International Shark Attack File. For example, you are more likely to die from a lightning strike (one in 79,746) or a fireworks incident (one in 340,733) than a shark bite (one in 3,748,067).

Since 1935, there have been sixty-seven shark attacks in North Carolina (thirty-four of those attacks occurred from 2010 to 2019). Ten attacks occurred in the Outer Banks, eight in Dare County, and two in Currituck.

While it may appear that there are more sharks roaming the waters off the coast of Virginia and North Carolina, that’s not the case, says Emily Boone, director of biological instruction at University of Richmond. “We have seen a decrease in marine species because of habitat destruction, overfishing, and climate change,” she says. “The population of sharks is still declining.”

The real problem is an increase in the number of people going out to the beaches, she adds. “The more people, the more chances you will have of encountering sharks.”

Marine species in the water are in search of prey and often have to make a split-second determination, deciding if what they encounter is prey.

“If you are splashing around or wearing jewelry, you may look like prey,” Boone says. “It’s a case of mistaken identity.”

Sharks feed at dawn and dusk and a baited line attracts other fish. Sharks swim where there are schools of fish. “One of the dumbest things I have seen is people playing in the water at dusk and swimming near fishermen who are fishing off the beach,” says Boone.

The UR scientist adds that we are also hearing more about shark attacks because of social media. “It used to be a shark bite was a local story, but now everyone is out there with their cell phones,” Boone says.

When Melissa got out of the water, a friend who is a nurse put pressure on the bite with towels to stop the bleeding. “It was a small bite,” Melissa says, noting the shark bit her near the anklebone and underneath her heel. “The first doctor I saw confirmed it was a shark bite.”

Melissa was sent to the hospital in the next town for treatment. X-rays were taken to make sure there were no teeth left in the wound. She was given a tetanus shot, and doctors prescribed heavy antibiotics and bandaged up the wound.

“I was told as a kid that salt water was healing, but the doctor said salt water is a cesspool of bacteria. Anyone with any kind of open wound can get badly infected,” she says, adding her foot stayed sore for a few weeks, but she still enjoyed the rest of her vacation in a cabana at the beach. “That’s pretty much where I am most of the day anyway.”

Although Melissa didn’t go back in the ocean last summer, she and her husband Tyler and the girls go to the same beach every summer to enjoy the sun and family time in the water. “You can go out pretty far and it’s not very deep,” she says of the water along Sunset Beach. “We probably went out farther than we should have that day.”

The story about Melissa’s shark attack got picked up nationally. She felt comfortable talking about the experience, but at the same time, didn’t want to scare people. “I didn’t want people to cancel their trips to the beach. Things can happen anywhere in all types of circumstances.”

Melissa fielded a large volume of requests, but kept interviews to a minimum. “It was a small bite, and I didn’t want to dramatize it,” she says.

When she got a call from the National Geographic channel, she admits she was surprised. “They are more scientifically based, so it was an appropriate situation,” she says. “They were interested in my story because I am the only one who got nibbled on with their kids with them. I was a mom in the water with kids which is a unique scenario,” she says.

Melissa was asked to return to the scene of the bite, Sunset Beach, in September and film her firsthand account of the attack. She took her older daughter along. “They have re-enactors who look similar to our family and friends recreate the scenes,” she says.

Filming lasted a full day, and she says she didn’t feel as comfortable on set as she normally does. The National Geographic team wanted her to give a serious account of the attack so they asked her not to smile during filming. That was hard for Melissa whose broadcast studio work is all about being outgoing and bubbly. “You have to answer the questions they ask several times so they can film you from different angles doing the same thing over and over again,” she says.

Filming was interesting even though the shoot was atypical for Melissa. “I am used to things being lighthearted, filling the air with chatter,” she says. “On the shoot, everyone was super nice but very professional. There was no side chatter.”

Normally, in her work as operations director for Summit Media Richmond, Melissa would have some control over editing, but not in this case. “I’m a little nervous about how they do that,” she says of editing. “I won’t get to see it until it airs.”

Going Back in the Water

No one in Melissa’s family wanted to venture far out into the water after her shark incident. “We tried to encourage them to go back in the water,” she says of her daughters. “I wanted them to be fine. I wanted them to enjoy the beach. I didn’t want them to think the beach is where I got hurt.”

The beach is a place where families make memories, and Melissa loves being at the beach with her family. “We were back at the beach over Memorial Day,” she says. “I didn’t do a lot of swimming, but I had to go back. You can’t teach your kids to overcome a fear if you show them you are afraid of something.”

Because Melissa is a redhead, she is “more afraid of the sun than the water,” she says. She knows parents also have to be protective of their children when they are in the sun. “You definitely have to make sure you have all the supplies for kids. Bring it all with you – baseball hat, t-shirt, and sunscreen are all important,” Melissa says. “You have to wear it all, too. You can’t be the parent that tells their kids what to do, but doesn’t do it yourself.”

When kids are in the water, parents have to watch them constantly, making sure they haven’t drifted out too far. “Kids love the freedom to run around, but in one second everything can change,” Melissa says. “You have to keep your eyes on them.”

She has learned to bring a supply of activities with her so the kids can be entertained when their bodies need a break from the sun. “We’ve made shell ornaments, blown bubbles, and we play Uno,” she says.

While she never wants to go through another shark bite, Melissa has had a shark tattooed on her left ankle so she will always remember the experience. “My ankle is scarred, but not bad,” she says. “I have seen worse. I got lucky.”

Don’t Be a Victim

To decrease your already small chance of becoming a victim of a shark bite, observe these following rules from the Florida Museum of Natural History.

2. Don’t wander too far from shore. Doing so isolates you and places you away from assistance.

3. Avoid the water at night, dawn, or dusk. Many sharks are most active at these times and are better able to find you than you are to see them.

4. Don’t enter the water if bleeding. Sharks can smell and taste blood, and trace it back to its source.

7. Avoid waters being fished and those with lots of bait fish. Diving seabirds are good indicators of such activities.

10. Don’t splash a lot. Also, keep  pets out of the water. Erratic movements can attract sharks.

11. Use care near sandbars or steep drop-offs. These are favorite hangouts for sharks.

12. Don’t relax just because porpoises are nearby. Sightings of porpoises do not indicate the absence of sharks. Both often eat the same foods.

14. If attacked by a shark, the general rule is “Do whatever it takes to get away!” Some people have successfully chosen to be aggressive, others passive. Some yelled underwater; others blew bubbles.