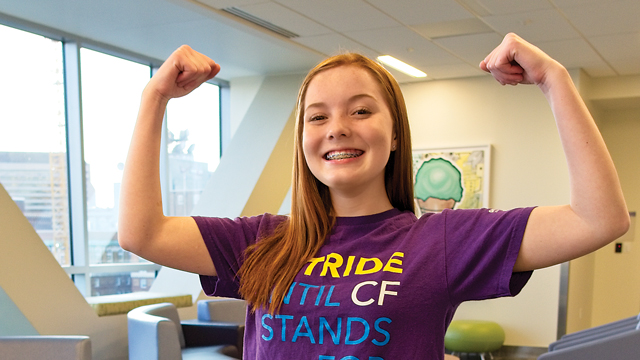 Why Life with Cystic Fibrosis Has a New Upside

Shortly after 15-year-old Anna Thompson was diagnosed with cystic fibrosis as a newborn, she had to spend thirty minutes three times a day participating in what is known as chest physical therapy. For the first years, her parents had to beat on her chest and back to loosen up the mucus in her lungs. When she turned three, she transitioned to wearing a vest that hooked up to a machine and pulsed air rapidly, squeezing the chest and taking the place of hand percussion. Every day, three times a day, no matter what she has going on that day, Anna has to put on this airway clearance system.

Fortunately, she now has a battery-powered vest, so she can move around while wearing the vest and can transport it relatively easily, a huge benefit for an active teenager who likes to spend time with her friends whenever possible.

In addition to the airway clearance system, Anna takes as many as six medications and supplemental vitamins each day, uses an inhaler and a nighttime nebulizer, and takes pancreatic enzymes before eating. Because she has cystic fibrosis-related diabetes, Anna also checks her blood sugar and takes insulin four times a day.

Managing medications and treatments can be overwhelming, but Anna’s father, Eddie Thompson, is impressed by Anna’s ability to take care of herself. “She is super responsible and never misses her treatments,” says Eddie. “Her friends are very understanding and provide a good support group.”

Anna was diagnosed with cystic fibrosis when she was only six days old. “We knew it was a possibility based on prenatal testing,” says Eddie, “but we knew nothing about cystic fibrosis.” A child can be born with cystic fibrosis if each parent is a carrier, meaning they have a particular gene mutation. The chance that two carriers will have a child with cystic fibrosis is 25 percent. Anna’s parents quickly got a crash course in the disease. They took Anna to doctors’ appointments at Children’s Hospital of Richmond at VCU once a week initially and have taken her to regular visits every three months since her first birthday.

What is Cystic Fibrosis?

Cystic fibrosis is a genetic, progressive disease that can lead to severe respiratory and digestive problems. These issues are caused by mutations in the cystic fibrosis transmembrane conductance regulator (CFTR) gene that impede the CFTR protein. As a result, the protein cannot move chloride to the cell surface, a necessary action to attract water and thin out mucus. Without water moving through the lungs, mucus becomes very thick and sticky, and germs and bacteria get trapped in the lungs.

“Without fluid, you don’t have this layer for the cells to swim in this sort of shag carpet of hair cells in the lungs that is like a moving sidewalk,” says Joel Schmidt, MD, a pediatric pulmonologist with Children’s Hospital of Richmond at VCU. “Any dust particle you see in a sunbeam, any bacteria you inhale, is cleared by these cilia, but in cystic fibrosis patients, it doesn’t move.” That can lead to infection, which causes more damage to ciliary motility – the movement of foreign material through the respiratory tract – contributing to a vicious cycle. Airway clearance helps move the bacteria out of the lungs.

Patients like Anna participate in chest physical therapy to help break up the thick, sticky mucus and keep it from clogging the airways and trapping germs and bacteria. Cystic fibrosis doesn’t affect only the lungs, however. The mucus buildup in the pancreas can prevent digestive enzymes from being released. These digestive enzymes help the body absorb nutrients. Without them, patients experience poor growth and weight loss.

Many cystic fibrosis patients and their families feel encouraged by the improving prognosis after the recent approval of a medication for use by patients ages twelve and over. Clinical trials of this new drug, Trikafta, have shown improved lung function, weight gain, and improved quality of life overall.

Trikafta was developed for patients with at least one F508del mutation in the CFTR gene. “This means they have a deletion of phenylalanine (an amino acid used to produce proteins) in position 508,” explains Dr. Schmidt. It is estimated that 90 percent of patients with cystic fibrosis have this particular gene mutation.

The origins of Trikafta reach back to 1989 when Francis Collins, MD, and his colleagues at the University of Michigan and the University of Toronto discovered the gene that causes cystic fibrosis. “With the discovery of the gene came the knowledge of the protein the gene is supposed to make,” says Dr. Schmidt.

About a decade later, researchers discovered a molecule that could change the shape of the protein, and another decade later, brought to market a drug that would improve the functioning of the CFTR protein. That drug, Kalydeco, worked for about 5 percent of cystic fibrosis patients for whom the defective protein successfully traveled to the cell wall. “It worked wonders,” says Dr. Schmidt, “and it was called the drug of the year.”

A later iteration, Symdeko, took the next step of getting the protein to work once it reached the cell wall. It was effective in about 45 percent of patients, who saw a slower decline in lung function, a step in the right direction. “Knowing they had something good that just needed to work better, researchers worked toward a triple-combination drug,” says Dr. Schmidt.

After observing cystic fibrosis patients over twelve taking the drug for nearly two years, researchers have seen that the 10 percent improvement in lung function remains stable. “If we were to compare to a placebo – and that would be unethical at this point to keep patients off this drug – those patients would generally have a 2 to 5 percent decline in lung function every year,” says Dr. Schmidt. “So, to have a 10 percent improvement and stay that way is great.”

An adult patient Dr. Schmidt used to care for saw significant improvements after having taken Trikafta for six weeks. She had been waiting for a lung transplant because of the extreme decline in her lung function, but after having taken the new drug, she is now off the transplant list. While she still has diseased lungs and will need to continue fighting off infections, the medication has bought her more time.

What it Means for Anna

Since first hearing about the medication, Anna and her family have been hopeful that taking Trikafta might enable her to decrease
the number of treatments she has to participate in each day. “It would give her a lot more freedom. It would give her more time to do what teen girls like to do,” says Eddie. “Even if it cut out one or two treatments, it would be a plus.”

Now that Trikafta has been approved for patients twelve and older, researchers are working to approve the drug for patients ages six to twelve. “We already know this is a safe drug, we know this is an effective drug, so all we need is to do some clinical trials to see what the best dose is for 6- to 12-year olds,” says Dr. Schmidt. Once researchers determine the best dose for that age group, they will look at the best doses for ages two to six and then, six months to two years. The earlier patients start taking the medication, the better their prognosis because they can achieve improvements in lung function before significant damage has occurred.

While the Thompsons hope Trikafta will help Anna eliminate at least one of her time-intensive treatments, the medication could have an even greater effect. Dr. Schmidt says the teen patients he treats for cystic fibrosis take six or eight different medicines and multiple pills every day to keep them healthy. “Those patients who are thirteen years old and start this medicine – are they still going to need to take all of these medications?” he wonders, and adds that this medication has changed everything doctors have known about the best therapies for treating cystic fibrosis, so it is difficult to predict what the impact will be for each patient.

And ultimately, while this medication is revolutionary in many ways, it is a step toward a cure that will help everyone affected by the disease. There is more work to be done, for instance, to help the 10 percent of patients who don’t carry the f508del mutation. “This is another bridge, and it’s a pretty good one,” says Dr. Schmidt about the new treatment. The long-term hope is that eventually, patients won’t even need this new medication to enjoy better lung function and a higher quality of life.

The Thompsons are optimistic that Trikafta will make it easier for Anna to manage her health, particularly as she gets older and establishes a more independent life. “We have always stressed to Anna the importance of staying healthy,” says Eddie, “but as soon as she leaves home, I’ll be worried about her.”

It was concerned parents like Eddie who helped bring about treatments that can improve lung function and quality of life. More than fifty years ago, a group of parents frustrated by physicians’ inability to help their children started the Cystic Fibrosis Foundation. “They founded this organization to raise money to fund their own research for this orphan disease,” says Dr. Schmidt. Those efforts have led to groundbreaking research and progress in treatment. According to the Foundation, nearly every approved drug available today was made possible with their support.

Eddie and Anna have been involved in the Richmond chapter of the Cystic Fibrosis Foundation and were given an award for their work to help raise money locally. Eddie is a musician, and several years ago, he began organizing a music event, Anna’s Quest for a Cure, to raise money for the foundation. While each fundraising event has been different, they have raised up to $10,000 each year through selling t-shirts, hosting a silent auction, and soliciting optional donations. “Raising money for cystic fibrosis gets Anna involved in something she enjoys doing,” Thompson says. That money earned can also contribute to the research leading to further treatments that will continue to improve not only Anna’s prognosis, but the prognosis of everyone living with cystic fibrosis, for a longer, healthier, and more fulfilling life. 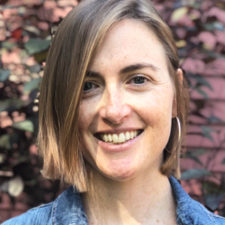