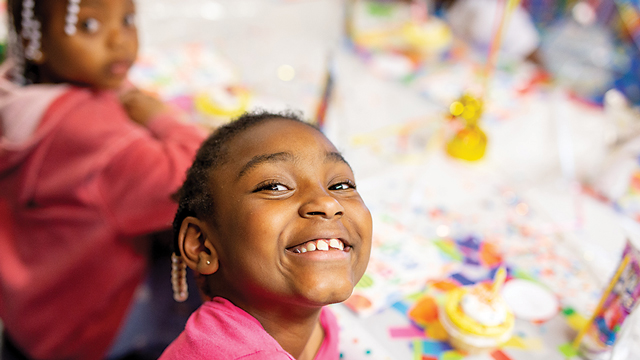 At the Bellemeade Community Center in South Richmond, a fifth grade student had a message to share with the world. “That’s my birthday twin!” Niq-Niq called out across the room.

On the receiving end of the greeting was Julia Warren, the 22-year-old founder and executive director of Celebrate RVA, a nonprofit that throws birthday parties for students who otherwise might not receive one.

Thirteen-year-old Niq-Niq and Warren are more than ten years apart in age, but as Niq-Niq proudly proclaimed, they both have April birthdays. Warren’s organization has celebrated Niq-Niq all six years she attended Oak Grove-Bellemeade Elementary School, where four in five students live in households experiencing poverty, according to data from the Virginia Department of Education.

Since its founding in 2013, Celebrate has thrown birthday parties for more than 1,300 children in the Richmond area, complete with sweet treats, birthday hats, and goodie bags.

“All of it is aimed at giving children a taste of happiness,” Warren said.

Warren said all children deserve to know they matter, and celebrating a birthday is an important way to do that. “I believe the kind of joy that comes from a birthday party is fundamental to a child’s development,” said Warren.

Oak Grove-Bellemeade Elementary is where Warren got the idea to start the organization.

Warren, who was sixteen at the time, was volunteering at the school through her church when she used birthdays – one of her favorite subjects to talk about – as a way to start conversations with the students.

One student’s response stuck with Warren and ultimately motivated her to launch the nonprofit. “He looked up at me and said, ‘I think I was born when it was cold outside.’” As a birthday party-loving teen, Warren said she will never forget how upset she was that this young boy didn’t know when his birthday was.

A few months later, Warren was throwing birthday parties for students at the school. When she turned eighteen, she incorporated
the nonprofit.

SpyRock Real Estate Group donated 4,500 square feet of space for a community center at 908 Oliver Hill Way in Richmond’s East End that will allow Celebrate to have a permanent home. The center, which is set to open in early 2020, will have a dedicated party room and community room and will house Celebrate’s office, among other things.