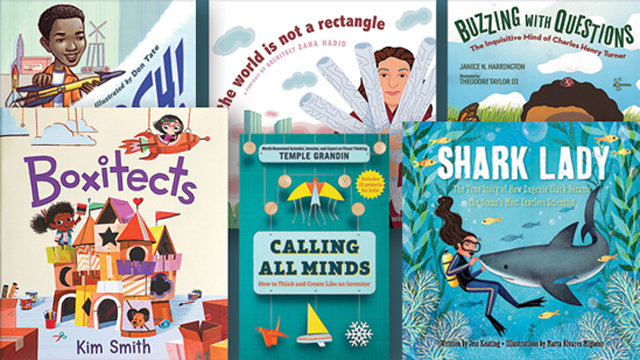 My mom was an avid reader and instilled in me a love for books from the start, literally. She got my name, Timshel, from John Steinbeck’s East of Eden. Not only do I adore reading, but I worked at a bookstore in my younger days where I managed the children’s books section which included weekly story times. So, it should come as no surprise that I’ve got a thing for collecting children’s books.

Books are my favorite gifts – to give and receive – and because I also love science, many of the titles I pick have a connection to STEM. Here are some recommendations from my recent favorites that will help connect your children to the science all around them and introduce them to scientists whose curiosity and tenacity have helped us live happier and healthier lives. When you read this article here, you’ll see Next-Level links with at-home activities to inspire your young science lovers.

Shark Lady: The True Story of How Eugenie Clark Became the Ocean’s Most Fearless Scientist   by Jess Keating

Eugenie Clark was a bit of a hero to me while I was in college. Although I never met her, she was teaching at the university where I was studying aquatic science, and I almost got into one of her classes. This beautifully illustrated book tells the story of how she persevered to study the animals she loved so much despite many telling her that she couldn’t.

As children, many of us had the pleasure of using boxes and our imagination to create and visit new worlds. This book tells the story of Meg who is a creative boxitect – she builds things from boxes – who gets to go to maker school. While there, Meg meets other makers, such as blanketeers, spaghetti-tects, and egg-cartoneers. When she meets a new maker, Simone, competition ensues. This book also includes some fun boxitect challenges for readers to try.

The World is Not a Rectangle: A Portrait of Architect Zaha Hadid   by Jeanette Winter

Think about the last time you drew a house or a building. Was it a rectangle? That’s what many people would draw. But Zaha Hadid looked to the natural world for her architectural inspiration and didn’t see a lot of boxes. She saw swirls, waves, and curves. Buildings such as the Heydar Aliyev Centre in Baku, Azerbaijan, bring these beautiful visions to life. Another story of perseverance in the face of many rejections, this book not only teaches about Hadid’s life and the struggles she overcame, but reminds us that conforming isn’t the only way to a solution.

We often take for granted our favorite toys and technology without thinking about the challenges, failures, and perseverance of the people behind the inventions. This book tells the story of one such inventor, maker, and engineer. In 1968, Lonnie Johnson represented his high school in the Alabama science fair. He was the only Black student in the fair, and his team won first prize with a robot he named Linex. Johnson continued to invent as he grew up, and worked as a NASA engineer on the Galileo satellite that would orbit Jupiter in 1996. But his most famous invention didn’t have anything to do with the cosmos. It’s the Super Soaker water toy!

Calling All Minds: How to Think and Create Like an Inventor   by Temple Grandin

Written from Temple Grandin’s unique perspective on the world (she has autism), this book not only encourages readers to wonder how things work, but to tinker, innovate, and improve upon the world around them.

I have heard Grandin speak twice, and I’ve read many of her books for adults. This book for young readers reminds us that nothing was ever created or invented by folks doing the same things over and over. There is no one correct pathway to an answer; find your own and maybe you’ll invent something new along the way.

I am a biologist and I adore invertebrates – living things without bones – including bugs. I loved learning about Charles Henry Turner and his indefatigable (the author often uses this word in the book to describe Turner!) pursuit of how and why animals such as ants, bees, moths, and even cockroaches perceive the world. The first Black entomologist of note, Turner is the reason we know honeybees can see color, spiders can learn, and that some insects can hear and distinguish pitch.

As the director of playful learning and inquiry at the Science Museum of Virginia, Timshel Purdum heads up the education division and oversees staff who create interactions and experiences to engage and inspire guests. It’s literally her job to make learning fun. A Virginia native, she joined the Science Museum of Virginia team in the fall of 2018.