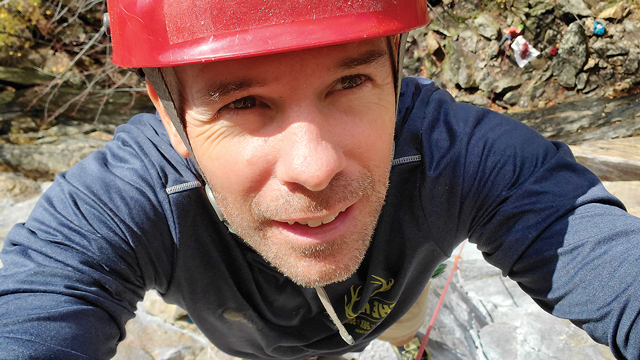 Portions of this article updated April 2022

Kevin Tobin doesn’t need an alarm clock to get him out of bed most mornings. He says the sun and his drive take care of that for him. “There are things I want to do, need to do, and am excited to do… that’s what gets me out of bed,” he says.

In the summer, that means he’s the first to arrive at the Passages Adventure Camp drop-off site near the American Civil War Museum in Richmond. As director of the camp, he’s there by six-thirty in the morning to unlock gates and start getting out equipment. Then he and the assistant director precisely lay out the day’s materials. “Our philosophy is to treat our program areas like a surgeon’s tray,” he says. “Counselors should be able to shut their eyes and put their hands on exactly what they want.”

After the counselors arrive for their 7:30 a.m. meeting, everyone starts moving.

Some of the counselors get to work setting up the day for campers, and others stay at the drop-off site to direct campers of all ages to where they need to be.

Tobin, as he’s known by most, wants the kids to feel welcome and start activities as soon as they arrive and not have to take time setting up. As advertised, the camp’s goal is to make kids tired. “Anything worth doing is worth really doing,” he says. “We want it [a day at camp] to be an experience that is exhilarating. And in order for that to happen, we have to be completely invested and our campers have to be completely invested.”

Whether they’re exhausted from kayaking down the James, rock climbing, or mountain biking around Belle Isle, there are countless stories of kids who couldn’t stay awake for the ride home at day’s end. Tobin says, “It’s part of what makes you stronger, and your body can do a lot more than your mind thinks it can do.”

Tobin and his staff keep kids moving at their own pace, encouraged by counselors and fellow campers every step of the way. Campers ages eight to sixteen attend the Passages sessions on and around Belle Isle and the James River. Younger kids have the opportunity to attend day camp at Peak Experiences (climbing facilities affiliated with Passages).

Part of the appeal for families is that some of these outdoor activities might be perceived as dangerous. What the kids don’t know is that Tobin has spent years working on risk mitigation and carefully training his trusted staff, many of whom are former campers. That’s why parents like Michelle O’Donnell felt so comfortable leaving her kids in his care. “Oh yes, I was nervous,” she said about signing up her then 9-year-old for Passages. “I would go out on the bridge and watch the kids kayaking and see that they weren’t out there by themselves floating around.”

O’Donnell’s three daughters were all Passages kids, starting with her oldest, Holly, whom she describes as quiet before she found the camp. She says her daughters learned skills beyond climbing and kayaking. And those lessons came from the top. O’Donnell says she noticed how Tobin immediately put everyone at ease. “He’s really just a natural at mentoring, and somehow, he conveys those skills to kids,” she says. “His enthusiasm is just infectious.”

She watched Holly, now thirty-two, turn into a driven and outgoing young woman. She says along with teaching life skills, Tobin’s camp experience fostered her daughter’s love for nature and kids, and that helped Holly find her career path as a pediatric psychologist treating children and adolescents in Colorado. “There’s no doubt in our minds that her ability to be this kind of open soul with these kids and compassionate and a leader came from her experience working there [as a camp counselor],” O’Donnell says.

All in a Summer’s Day

Camp days are long for Tobin, sometimes twelve hours or more. Campers are on-site from eight until five, and he’s there before and after, plus activities with counselors some evenings. While camp is in session, Tobin spends the majority of his time riding his bike around Belle Isle keeping an eye on up to six different camps at a time.

Then there are after-camp duties many nights, plus all the time spent doing administrative work like schedules and payroll. “So my wife gives me a kiss in May and she says, ‘I’ll see you in September,’” he jokes.

Once the day gets going, Tobin says he tries to not interfere with the connections he sees happening. “I’m more of a stenographer of the magic that they create, and I try to help the next generation of staff learn from those things.” And that long line of campers turned counselors is a big reason why Passages has been so successful for so long.

Passages alum Michael Stratton met Tobin when he was a junior counselor and went on to help found the biking program at the camp. Stratton says he and Tobin bonded over their shared ability to problem solve. “He and I think alike. There were a lot of times we would just hang out after camp, look at a problem, and be like, ‘How can we solve this? What can we do?’”

Eventually Stratton and Tobin worked together to create the mountain biking program at Passages, something that was a goal of Tobin’s for many years.

How It All Started

Kevin Tobin has spent most of his life at summer camp. He started volunteering at a camp in Massachusetts when he was twelve and later spent summers at Camp Thunderbird in Richmond while he was studying engineering in college. After earning his degree, he made Richmond home. One of the big draws: the James River. Growing up in the Northeast, he wasn’t used to a river clean enough to swim in.

Today, the river is as much a part of Passages Adventure Camp as Tobin himself. “The James is dynamic, we always refer to it as The Mighty James,” he says, “and so we’ve got to know its character at every single level, and in every area, but it’s amazing to be there.”

After a few years at Camp Thunderbird and running programs at the YMCA, Tobin found a home at Passages as director and worked his way up at parent company Peak Experiences where he is now an owner.

Along with his full-time job at Peak Experiences, Tobin would find himself representing Richmond sports teams as their mascots, sometimes in exchange for marketing for the camp. During a stint as the Richmond Renegades’ alligator, Tobin repelled from the ceiling of the Richmond Coliseum in a 35-pound costume, unclipped from his gear, and skated around the ice. “I’m from Massachusetts, and grew up playing pond hockey and could skate,” he explains.

Outside of camp, Tobin is an athlete himself, competing in marathons, ultramarathons, triathlons, mountain bike races, and adventure races. It’s not uncommon for him to bike more than twenty miles from his home in Ashland to work in Richmond.

The home Tobin shares with wife Michelle and sons Jameson and Liam is a log cabin he built on the property that was once a farm on his wife’s side of the family. His family shares his love for the outdoors. Both sons are now counselors at Passages. Tobin says they had to go through the same intense process as every other candidate before getting the job.

Staffing camps for the following summer is one of the many things on Tobin’s long to-do list for the winter. Along with managing the youth programs at both Peak Experiences locations, the off-season is spent working through a meticulous document detailing everything Tobin and his Passages team need to do to close out one season and get ready for the next. He has honed the process over two decades, breaking down tasks by week, and says it keeps him on track.

Most of the Passages counselors are camp alums who want to continue the Passages experience. To become a counselor in training, Tobin has the kids complete an application and go through a rigorous process that includes multiple interviews and reviewing a 13-page job description. He conducted approximately one hundred interviews over a 4-month period to hire forty-four new staff members for the upcoming season. He hires early so the staff can block off weekends for training, and he tells the staff he would never put them in a position of responsibility without properly preparing them.

Parents like Michelle O’Donnell think the lessons her daughters learned from going through the hiring process and working as a counselor went a long way. She and her husband were impressed with the leadership skills Holly and Caroline picked up while enrolled at the camp. She says, “Kevin is a great mentor. He is gentle with people. He is fun with people, but he leads, and he has some very nice standards like all inclusiveness.”

Part of that natural mentoring is helping kids find their path. Tobin says about half the kids have an idea what they want to do after high school, but that doesn’t necessarily put them ahead. “I tell them, ‘First find out what you love, and you find that out by trying a lot of things, and then there’s a way for you [youth counselors] to find a livelihood.’”

He laughs about not going into the field of engineering, but it’s clear that this camp is run by someone with the precision of an engineer and the heart of someone who values the wellbeing of the campers and counselors. “Our job is just not ever to let anyone slip through the cracks … not in risk management, and not emotionally,” he explains.

And there is some risk to what these campers are doing. One of the challenges for staff is staying on top of the current conditions of the James. It’s become a part of the process. “We’re really accustomed to perceive risk as ‘this is where that log is in the river’ or ‘this is where the top of the cliff is,’” Tobin explains.

Part of that is not pushing the campers, but supporting and encouraging them and letting them go at their own speed. “It’s not a race, it will come to them,” Tobin says.

For the past few summer, the coronavirus pandemic was another risk to be managed. Tobin was adamant about keeping Passages going and keeping campers safe and helping everyone experience more outdoor joy and less anxiety.

Tobin says he’ll continue at Passages as long as it keeps motivating him to get out of bed in the morning. For now, he’s grateful for where he is. “I can’t tell you how many times a day I kind of look around, and I can’t believe that this is my job and this is where I get to be.” 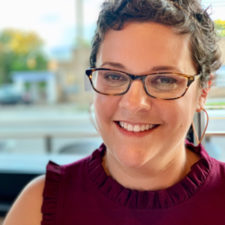 Tara Daudani is an Emmy award-winning journalist and mom of two girls. She is originally from Ohio, but now calls Richmond home. Along with advocating for women’s health issues, Tara loves sharing the stories of the inspiring people who shape our city. 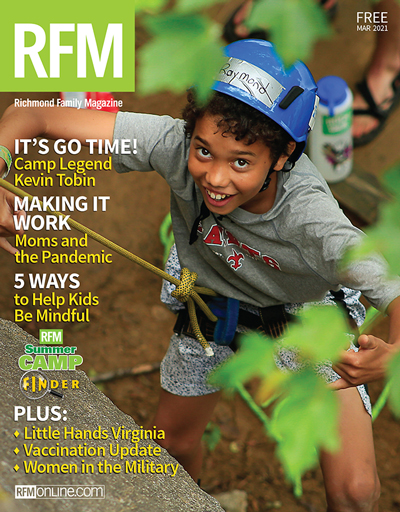