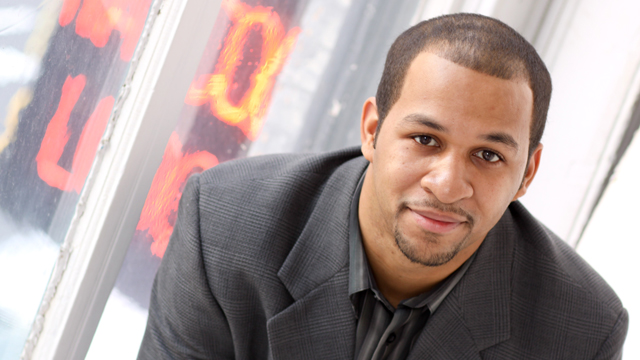 Richmond Father is a Star Among Us

This month, we caught up with actor, singer, teacher, husband, and father Jerold E. Solomon. You may have been awed by this performer onstage a few months ago in Virginia Rep’s Atlantis. Or, you might recognize him as the actor who starred as Walter Younger in the family drama, A Raisin in the Sun.

Born and raised in Northern Virginia, Jerold came to Richmond to study theatre performance at VCUarts. After college, he toured for a year before moving to New York where he racked up theatre credits (including South Pacific on Broadway and a national tour of Ragtime), plus a handful of TV and film appearances.

Five years ago, he and his wife Alison moved back to Richmond with the family, which now includes an 8-year-old daughter, two sons (six and three), and a foster child. “I love New York and New Jersey, but down here we can give our kids a childhood experience similar to ours,” said Jerold.

In addition to acting, Jerold just wrapped his fourth year of teaching theatre at Meadowbrook High School in Chesterfield County. Some of his students have seen him perform in Richmond, and according to Jerold, that experience is important. “They really enjoyed Raisin in the Sun, and they loved Atlantis,” said Jerold. “I’m more interested in exposing them [students] to things they’ve never experienced and allowing them the opportunity to represent our school in the community than I am in having them watch me perform.”

It’s fitting that Jerold is making a difference in the classroom today, as it was a high school teacher of his who first suggested studying theatre in college. “My senior year was the only year I took theatre as a class,” said Jerold. “A couple months into the year, the teacher pulled me aside after class and asked what my plans were for college.” After he explained to her that he didn’t have much of a plan beyond his parents’ expectation that he would go to college, Mrs. Welch suggested studying theatre and told him she thought he was good enough at acting to pursue it as a career. “I had never had a teacher believe in me in that way, and it was the earnestness in her voice that made me believe it,” said Jerold.

Next, she recommended a few colleges, including VCUarts. “I loved the vibe of the school so much, and I honestly don’t think I would have studied theatre anywhere else,” says Jerold, recalling his days in the program.

Ultimately, family is what matters most to Jerold, who says his wife of almost ten years, Alison, is “an incredible nurse and so multi-talented, it is ridiculous.” Jerold says his daughter loves to dance and his sons are “goofy,” i.e., full of energy and outgoing. “I probably wouldn’t encourage them to pursue the theatre as a career, but I wouldn’t discourage them either,” said Jerold. “Whatever passion they find on their own path, I will support full-out.”

Keep reading to learn more about this family man and theatre standout. And look for Jerold this summer in The Wiz as The Wiz (and Uncle Henry) at Virginia Rep’s November Theatre on Broad Street.

Definitely the beach. I have flat feet so I’m not climbing any mountains.

I like dogs better than cats in general because they are playful and have a lot more personality. But if I were to have one for a pet, I would rather have a cat. I respect their independence and attitude. Dogs can be needy.

Actually the Bible is there right now – but it’s not being read as much as it should be.

What podcast are you hooked on?

I listen to The Herd with Colin Cowherd every day. I’m a sports junkie, and I enjoy his takes. My wife hates him!

What’s the last play or concert you attended in Richmond?

I think Pinkalicious at the Children’s Theatre at Willow Lawn.

Favorite Richmond restaurant for the family?

When it’s just you and your honey?

With three kids plus a foster child, that doesn’t happen very often, but we had a really nice lunch date at Tazza Kitchen.

We like Maymont a lot and Deep Run Park. During the summer, it’s nice to find one of the local splash parks for the kids.

We go to New York around Christmastime every year. It’s become a Solomon family tradition.

Watching football with the family – or a popcorn and movie night if it’s not football season.

My wife and kids. Everything I do, I do for them.

Readers will be surprised to know… that I did stand-up comedy for a year in New York just for fun. My first time on stage was at an open-mic night that had Amy Schumer before she was Amy Schumer. I got some laughs – then BOMBED my next time. But for a year, I think I did okay. I might hit up some local spots here if I ever have the time.