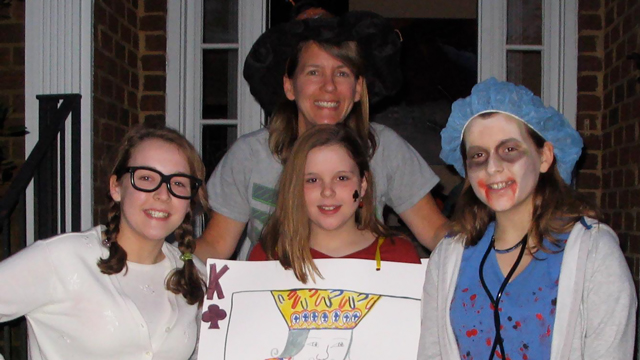 “Butterfingers are my life.”

Our middle daughter, the child who teachers often described as an old soul in elementary school and who in young adulthood still has a somewhat tenuous relationship with smiling, made this statement one Halloween. My husband overheard her talking with a friend while he trailed them as they trick-or-treated on our street.

After he told me about Robin’s profound love of Butterfingers, we both laughed out loud. Our women-children (six, eight, and ten at the time) were sorting and counting their candy haul at the kitchen table. Our oldest daughter Sam, who is allergic to peanuts (and a long list of other foods that thankfully are not handed out by strangers on Halloween), had dutifully separated out her Reese’s Cups, peanut M&Ms, Snickers, and of course, Butterfingers.

Next came the haggling.

Just how many Twix, Kit Kat, and Nestle’s Crunch candy bars would Robin be willing to part with for Sam’s Butterfingers anyway? Would Lindsey, the youngest and most gullible, end up with all the Laffy Taffy, Skittles, and pretzel packs this year? Would Sam ever figure out that her mother was really the one eating all of the peanut M&Ms? Not just hers, mind you, but everyone’s?

For fourteen years running, we had hosted a huge party in celebration of Halloween. It started as a small gathering with another couple to carve pumpkins. A new house and three kids later, the Halloween party had a guest list that included most of the neighbors, family friends, work friends, the kids friends’ families, favorite teachers, and a few parish priests. We had three kinds of chili, crafts for the kids, jewelry making with Halloween beads, and face painting. We mailed an invitation that declared the party wasn’t over until the “last gourd was gored.”

During this time, we amassed enough pumpkin-carving paraphernalia – scrapers, pokers, scoops, and knives – for the entire West End. We were buying close to fifty pumpkins a year (Walmart had the best deal back then). Each year, specially designated celebrity judges awarded prizes for different categories like most original, spookiest, and cleanest pumpkin (because real pumpkin artists know you have to scrape away the inside of the pumpkin’s wall to make it easier to carve). When stencils were the rage, we gave out a booby prize for best use of stencil (sorry, we had little or no respect for anyone who went this route).

In August 2009, my dad – who had once proudly served as a celebrity judge – died suddenly. By early October, the threat of H1N1 flu had begun to over-shadow the fall festivities. Then Robin got sick with the flu. We canceled the party and never looked back.

The next year, Halloween became an easier holiday because we got out of the way. Most holidays contain some level of ritual and varying degrees of stress, but we learned that Halloween doesn’t have to be stressful or expensive. We created new rituals and paid more attention to our kids and their enjoyment of the day.

Kids love candy. Heck, most people love candy. It’s a mood booster! Cocoa contains theobromine, a substance that increases chemicals called endorphins and produces a feeling of general well-being. I’d go so far as to say that kids need candy. And they need to know it’s okay to eat it. Maybe not every day, but definitely occasionally, and Halloween is the time to let loose a bit and let your kids have candy.

More than candy, kids need to use their imaginations. They need to feel comfortable, loved, and accepted when they want to dress up like monsters, superheroes, zombie doctors, killer butterflies, robots, firefighters, clowns, and hippies. They need to feel smart and validated for designing their own costumes and working with a handful of friends to parade around the neighborhood or attend a party dressed as the four seasons or characters from the musical Newsies.

One of the best things about Halloween is it’s only one day. If you have kids, trick-or-treating is also a great way to get outside on a fall night and maybe meet a few neighbors. If you don’t have kids, put a pumpkin on your porch and give out full-size candy bars to everyone. Yes, even the boy who’s a head taller than you. It doesn’t matter how old you think he might be. This kind of social connection – especially as the pandemic continues – will help you feel happier and healthier. And you’ll be a star on your street for one night.

Last year, we built a candy chute for the front porch to safely deliver Halloween treats to kids (and when I say we, I mean my husband). We were the house with the candy chute. For us and for a lot of people, it was a chance at a Halloween reset to create new rituals and find other ways to make a spooky and kooky holiday even more fun.

This year, Halloween will probably look different again and perhaps that’s not a bad thing. Ultimately, the playfulness and creativity of Halloween can help prepare families for things that are genuinely scary, like talking to relatives about religion, politics, or climate change over Thanksgiving dinner.