Are We Sending the Wrong Message?

I have a friend who is constantly posting negative thoughts about her daughter on Facebook. I believe they call this kid-shaming, but I’m not sure. There might be a picture of the sink full of dishes she didn’t wash or her really messy room. Or she’ll write something like, “Anyone else’s kid still trying to jam herself into size zero jeans?” When I see this girl, I just want to hug her. Should I bite my lip with the mom or bring it up over coffee?

Parenting is hard work, and it can be an emotional roller coaster for everyone. When situations get dicey and emotions run high, parents tend to become more reactive. During this loss of control, parents could say things they do not mean and at times use shaming statements out of anger or frustration. Also, shaming may be used as a last resort when parents feel as if all other discipline techniques seem to be ineffective. Oftentimes, parents regret their behavior and hopefully, apologize. But, when parents use the Internet as a tool to vent that frustration or comment on their children’s behavior, parents expose their children permanently.

Does this kind of dramatic parenting have enough impact to stop the child’s behavior? Maybe for the short term, but it may prove to shatter trust between parent and child, lower the child’s self-esteem, and make the child an easy target for bullying.

Social media is a slippery slope when experimenting with these creative parenting practices. However, what could be just as slippery is a heart-to-heart conversation about the issue with a good friend over coffee. If you are willing to make the decision
and talk to your friend, I would try a non-confrontational approach. Here’s my take
on getting the conversation started:

“I know I was that nervous mother expressing my lack of confidence on Facebook when my teenagers turned sixteen and became new drivers. I snapped pictures as they drove away, and I posted pictures on my wall of my proud son and daughter with the caption, Watch out! New driver on the road! My intention was not to shame my children, but I could have very well projected my insecurities on my children unintentionally. By using social media as a tool to communicate and network, I’ve provided a permanent, public platform that exposes me, perhaps lowering my anxieties at that particular moment, but may embarrass my children for a lifetime. My children are relying on me for guidance on how to problem solve, and I should know better than to cause a problem by drawing attention to the learning curve. Learning how to drive is very similar to mastering daily life skills, like household chores, or making fashion choices. It’s all a work in progress. While our kids are learning, let’s give them the gift of privacy to make mistakes and learn from those mistakes in their own way. In fact, I’m going to let my teens be the ones to post, snap, tweet, and blog about it. What do you think?”

By personalizing the story, my hope is that my friend will see that I am not attacking her position, but perhaps allowing her to see a new point of view. As a frame of reference and an example of extreme Internet parenting, I might also bring up one of those viral parenting choices, like the father who shot his daughter’s laptop a while back. If you do try to discuss it with your friend, keep in mind that friends can always agree to disagree, but at the very least, they should be able to share concerns without embarrassment and shame. 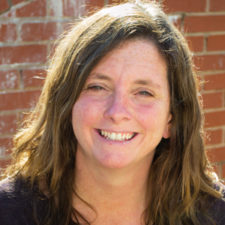 Michelle Johnston has worked with parents and caregivers as a family educator with Commonwealth Parenting for eighteen years. She is the mom of four.