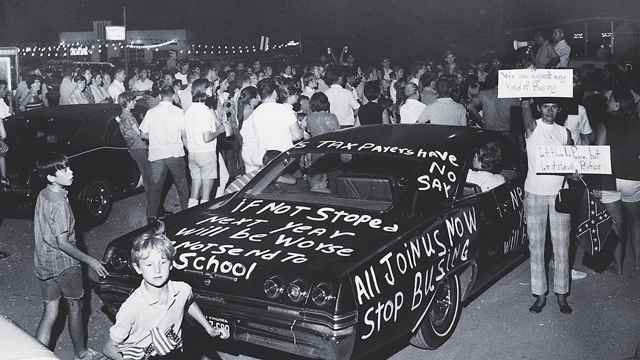 Busing and Desegregation in Richmond

In 1970, in order to satisfy a federal mandate to desegregate Richmond Public Schools, Judge Robert Merhige Jr. ordered the implementation of a busing program that would attempt to achieve racial balance in the school system. At the time of the order, enrollment in the Richmond Public School System was approximately 70 percent Black and 30 percent white. Since neighborhoods were still largely segregated, neighborhood schools remained so as well. The goal of busing would be to reflect this seventy-thirty balance of students within each school.

Opposition to the busing plan was powerful and widespread. Protests roiled the city. Thousands of white students took to the streets, waving anti-busing signs in protest, while many teachers threatened to resign. On the first day of school in 1970, 5,000 white students did not show up for class. That year, 13,000 students were bused. The next year, after the U.S. Supreme Court upheld busing, the plan expanded to 21,000 students.

In response, white families continued to flee the city. When it became clear that the imbalance could not be remedied with Richmond’s dwindling population of white families, Judge Merhige ordered the Chesterfield County and Henrico County School Systems to be consolidated with the city schools, in order to combine the racial composition and achieve a more representative balance of Black and white students. But the 4th Circuit U.S. Court of Appeals reversed the cross-county decision, a reversal that was later upheld by the U.S. Supreme Court. With the suburbs exempt, Richmond lost 12,000 white students in four years. By 1986, the year busing ended, white students made up less than 15 percent of enrollment in Richmond City Schools.

Judge Merhige, a graduate of the T.C. Williams School of Law at the University of Richmond, would be involved with many cases during his more than thirty years on the bench. His rulings on school desegregation defined his career and shaped his judicial legacy.