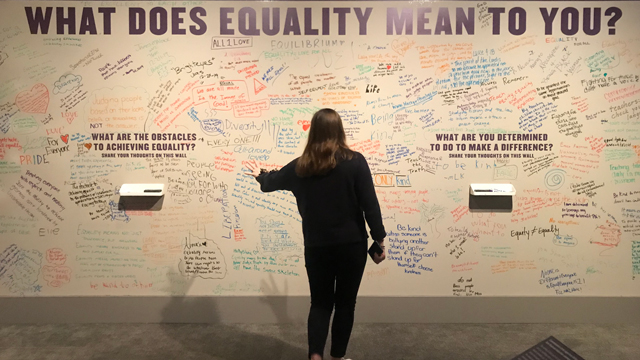 During a team-building activity in high school, the coach asked the group of athletes to share something that caused each of them anxiety. One by one, the courageous teenagers listed their things.

When it was my daughter’s turn, she said “climate change.” I don’t know what the other athletes said, but judging from the coach’s reaction to my daughter’s response, I’m thinking those scenarios were a better fit for her idea of typical teenage anxiety.

“Climate change? Really?” the coach asked. And then she offered up a comment about not wanting to get political.

Not wanting to get political. That is a tough one to unpack these days. As humans in 2020, our very existence is political – with lawmakers, public health officials, judges, and political appointees debating over what is necessary to not only help our families survive a pandemic, but also to help us recover from its devastating economic impact.

And then there’s the earth. As I write this, the smoke from wildfires 2,000 miles away has blanched what is typically a cornflower blue fall sky. Communities along the Gulf Coast have been inundated by torrential rainfall from yet another hurricane. Millions of taxpayer dollars – not to mention charitable and prayerful support – will be required to restore the lives of families across the country who have been dramatically impacted by climate change.

Of course, my daughter is right: The thought of climate change can be intensely anxiety-inducing. That weight of worry is a lot to carry around when you’re a teenager, especially when someone else supposes you should stick to being concerned about what college you’ll get into or whether you’ll get asked to the prom. But I have to say, I wasn’t surprised that my child had the guts to name her anxiety in front of her teammates. I am also very proud.

Soon after she told me about this exchange, I began thinking about why all three of my daughters tend to look at the world through a broad and empathetic lens. I believe our public schools had a lot to do with it. Because our elementary school was one of the most diverse in the district, my children learned empathy and compassion for a citizenry that included immigrants, Black classmates, Asian American kids, and students with disabilities. And later, in middle school, they each had that “one amazing social studies teacher” who taught critical analysis of toxic American exceptionalism.

In addition to our experience with education, whether we knew it or not (and for the record, we did not!), we ended up making some fairly solid parenting moves in those early years, too. I believe there are things you, too, can do to help your children develop an empathy-based world view and a foundation for becoming compassionate and engaged citizens, true patriots, and voters. Here’s what I recommend:

Watch media together that will spark conversations. Kids are bombarded with media of all kinds, so sitting with an adult and watching the occasional documentary or movie can be special. Choose docs that are interesting and timely, like RBG, the 2018 documentary about SCOTUS icon Ruth Bader Ginsburg, or 13th, the 2016 doc that examines systemic racism and mass incarceration of African Americans. In the film category, I recommend Life is Beautiful about the Holocaust, and Ava DuVernay’s Netflix miniseries, When They See Us, which tells the story of the Black boys who were wrongfully convicted for the murder of a woman in Central Park.

Visit history museums and have age-appropriate discussions about challenging subject matter. We discussed segregation and systemic racism while standing in front of the Whites Only! lunch counter at the Virginia Historical Society (now the Virginia Museum of History and Culture). We covered marriage equality and AIDS at an exhibit at the Smithsonian’s National Museum of American History. We encountered the term redlining for the first time at the Black History Museum in Jackson Ward.

Find ways that you, as a household, can make a difference in the community. Volunteer as a family with a local nonprofit or make a sign together and march in a demonstration for a cause you care about.

Talk to your kids about current events that are important to them and make connections. Hurricanes and mass shootings are scary, but they are part of our reality. If you’re feeling helpless, explain how elected officials can make laws to help protect the environment and to improve the chances of keeping guns away from the wrong people.

And finally, when elections come around (which, like it or not, is every year in Virginia), vote and participate in our democracy. Talk about leadership with your kids, talk about candidates and their values and what makes them the right person to represent your family in public service. Instead of focusing on what candidates claim they will do, look at who they are. What if we valued compassion and character (above all else) in leadership?

I believe, through intentional parenting, we can set a course for our kids that might help them live more compassionate lives and as a result, participate in their communities more fully. As Mother Teresa said, “If we have no peace, it is because we have forgotten that we belong to each other.” And if that doesn’t work for you, Prince said this: Compassion is an action word with no boundaries.