When my daughter Lily gave me tickets to a roller derby bout for Mother’s Day last year, I wasn’t sure what to expect. I like sports, and I’m always up for a new experience. But roller derby? I envisioned women’s staged wrestling on wheels, complete with booty shorts and evil-stripper stage names. I figured we’d pick some favorite skaters, boo the fake refereeing, and go home with another entertaining story to share with our less-adventurous friends.

And of course, that’s so not how it turned out.

Let’s just start by saying this is not your mother’s roller derby. Pockets of that era still exist, but today’s derby is more about core strength, CrossFit training, and sports Nutrition. Adult roller derby teams do two- and three-hour workouts that look less like mayhem in makeup and more like Seal Team on skates. In my sports life, I have varied between running, triathlon, and cycling, and I’m not sure I could keep up with some of these athletes. It’s not just a killer workout, it’s a competitive sport based on a team strategy. And its popularity among junior-aged girls is exploding. Our little Mother’s Day adventure ended up creating an entirely new team sports opportunity for Lily; one that scooped her up when traditional athletics fell flat.

Lily was inspired to buy me the derby bout tickets because we had recently watched the 2009 Drew Barrymore movie Whip It. Although the film leans more toward the traditional depiction of roller derby, it has revitalized the sport as a nonmainstream activity for alternative-minded girls. And it caught Lily’s attention.

At the time, Lily was struggling to go en pointe in ballet. We were in the middle of the frustrating discovery that success in her chosen athletic activity – ballet – depends almost entirely on what body type a dancer happens to have been born with. In Lily’s case, her promisingly high-arched ballerina feet just weren’t cooperating. Her foot rolled into a perfect pointe, but her ligaments were loose and the position hurt her ankles. It was also increasingly problematic that Lily didn’t fit into what I call the ballerina box – for example, she likes her hair short and although slight, she is on the curvy side of waif. So after seven years of loving dance, Lily pulled out.

And that looked like the end of her athletic career. She liked being part of a sports team, but not enough to get up at five-thirty in the morning for swim practice. As a high school junior, she was leery of trying to learn an entirely new sport at school. But apparently that rule didn’t apply to roller derby, as I discovered one night when Lily asked me to go with her to Skateland, a vintage skating rink on Hull Street. Lily had never skated before.

We fumbled our way around the wooden Rink during open skate, and somehow caught the eye of a few seasoned derby skaters who were there for a workout. As we were leaving, one of them approached Lily and told her about the juniors’ team that practiced there on Monday nights. That was nearly a year ago, and Lily has been skating pretty much four times a week ever since.

Roller derby is a sanctioned sport with several different governing bodies – the type of flat-track competitions held in Richmond are governed by the Women’s Flat Track Derby Association. The primary organization for young teens is the Junior Roller Derby Association, which today oversees ninety-one leagues (a league may include several teams) compared to only twelve leagues five years ago. This number includes teams in the United States and Canada, but does not include countless startups that haven’t yet applied for membership. The Association even awards four annual college scholarships to junior-level skaters who have been at it for at least six months.

“I really wish there had been this kind of full-contact sport for girls when I was younger,” says Marcy “Billi” Huster, a lawyer and mother of two who started skating with River City Rollergirls a few years ago at age 45. Huster doesn’t compete anymore; instead she runs and coaches Commonwealth Roller Derby, which started A team for kids seven and up last year. “You can be any size, any age, and play derby,” she says. “A lot of the girls who skate with us had never skated before.”

On a typical Monday night, Huster and her fellow coaches (whose derby names are “Stiffy” and “Snarls”) run about a dozen girls through several drills to teach speed, strength, and dexterity. For example, a coach may have the girls dribble a soccer ball as they skate, weave through a line of cones, or chase after a ball and practice falling down and landing on the giant knee pads that every skater wears. These girls glide through the workouts like ballerinas on wheels – a powerful combination of strength and grace.

Commonwealth’s Juniors engage in very little, if any, contact until they turn eighteen, but Huster plans to begin training the team for light scrimmages with newly formed teams in Virginia Beach and North Carolina. Not many sports for girls include, much less Encourage, full contact, which can be exciting for the girls, but a little scary for parents. “They do hit hard,” Huster says. “But just because we are hitting doesn’t mean that safety isn’t an issue. It’s paramount for us. The public doesn’t always understand – we aren’t sports entertainment, we are a sport and there are rules. No elbowing, no punching, you can’t push each other with your hands, you have to use the blocking zone.”

As a parent, I was reassured when I saw the required safety gear: helmet, giant knee pads, elbow pads, reinforced wrist guards, and a mouth guard. In fact, Lily is better protected than I am when I’m rolling over sharp rocks next to steep drop-offs on my mountain bike.

Lily was eager to train more than once a week (Commonwealth has since added a Friday night practice), so she started skating with an adult team. That’s when things went hardcore. The members of Mother State Roller Derby roll into the rink with their game-faces on. They wear serious black workout clothes – no flashy short-shorts or catchy derby names here. They skate three-hour workouts full of corestrengthening and agility drills. Most roller derby teams have up to twenty members, enough to regularly change out the entire six-member lineup during a two-hour bout, giving all the players significant rest time. Mother State bouts with only six or seven members skating the entire time, and they win. By a lot.

“I remember my first practice with Mother State,” says team member Amy “AJ” Broderick, whose college sports career included lacrosse, basketball, and field hockey. “I didn’t know I was going to get such a workout. That really impressed me. It’s a more traditional sports approach.”

After Broderick graduated from college, she ran up against a common problem for women who play team sports – not much opportunity to continue as an adult. That can wreak havoc with a woman’s motivation to stay in shape.

I’ve also noticed this among my athletic friends – they tend to keep fit when they are able to continue with the sport they loved as kids. That’s fine if you participated in an individual sport like swimming, say, or running. But as a child, Lily had abandoned swimming in favor of ballet and there just aren’t many non-professional ballet Opportunities for adults. Even if Lily had picked up a team sport like field hockey or basketball, there aren’t many team sports leagues for women.

“I went for quite a few years without [playing on] a team sport competitively,” Broderick says. “And I didn’t realize how much I missed it until I had this opportunity. Derby has presented me with the opportunity to play competitive sports as an adult, and you don’t really have that otherwise for team sports.”

After a few months of skating with Mother State, Lily developed some serious muscles, but she also began to appreciate the dynamics of team sports. She studied bout rules and strategy. She started asking me about sports nutrition, recovery tactics, and the benefits of kinesio tape. Over our chilly Thanksgiving holiday at the beach, Lily helped organize what she called a polar plank and plunge – a handful of us stripped down to bathing suits and held a core-strengthening plank competition on the beach, then dove into the ocean before running back inside for hot showers.

In other words, Lily has morphed into exactly the kind of well-rounded scholarathlete I’d always hoped she would become. I don’t know that I would ever have steered her towards roller derby, but I see that she has a passion for skating that can motivate her to stay fit as an adult. And the sport itself offers plenty of opportunities for her to keep playing at a team level.

As Lily filed her college applications for schools in New York and Boston this winter, she was delighted to find derby leagues in both cities, and she has been talking about starting an intramural team at whatever college she attends. It looks like last year’s Mother’s Day gift will keep giving both of us more than we ever expected. 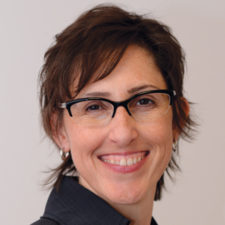