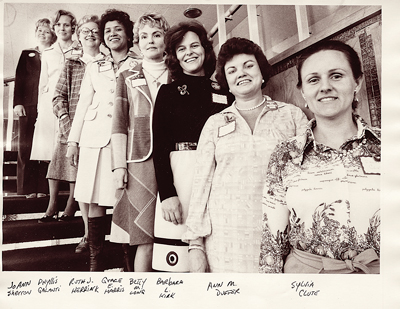 In 1975, Sylvia Clute, a former attorney for Reynolds Metals, decided to open a solo law practice. But despite her reputation as a successful attorney, five banks turned her down for a business loan. If they did return her calls, they always asked her how many children she had. The answer was three.

She became convinced that any man with the same qualifications would easily get a loan – with or without the children. She found a partner in Ann Duffer, Virginia’s first female pharmaceuticals representative, who had similar problems financing her own business. The two decided that Richmond women needed a financial institution to serve their needs.

Two years later, they accomplished just that. On Valentine’s Day 1977, the Womensbank opened on Main Street, in the heart of downtown. At a time when many banks still required a husband’s approval before granting a woman credit, this new bank employed mostly women, had a board comprised of 80 percent women, and hired a female president named Sally Buck. Buck herself had experienced employment discrimination over a long banking career, hitting the glass ceiling within the industry.

If anyone was in doubt about this new bank’s mission, the lobby literature spelled it out for them:

Due to historical financial inequality of women originating in our social and common law traditions, women are in need of special banking and financial services which are not adequately provided by the present banking establishment.

Richmond men supported the cause as well, with 50 percent of loans and 40 percent of checking accounts belonging to male customers. Soon, a branch opened in the West End.

This was the fifth female-centered bank of this kind in the country, though by 1979, Business Week identified the Womensbank in Richmond as the most successful. That success, in fact, turned bittersweet. Eight years after opening, the bank succumbed to the national trend swallowing many successful small banks: a merger. In 1984, shareholders voted overwhelmingly to accept First Virginia Bank-Colonial’s offer to buy their $20 million in assets. FVB-C rehired all twenty-seven employees, however, and maintained the bank’s original name in the new branch title.