A Mother's Vision for Her Son

“Are his pupils supposed to be clear and see-through?” Mary Bullock heard her husband’s question and felt sick to her stomach.

It was 1992. Just a few weeks before, the happy couple had brought their newborn, Nathan Andrew, home from the hospital. An emergency visit to the pediatrician, followed by a series of tests and more doctors confirmed their worst fear: Nathan was blind.

While trying to adjust to this devastating diagnosis, the Bullocks received more traumatic news just a few months later: It was likely that Nathan would start to develop progressive hearing loss, developmental delays, and intellectual disabilities before the age of five. Mary has a brother with severe disabilities. She remembers well the challenges her parents and the rest of the family faced while raising him. Would her family life be a sequel?

What the Bullocks now know is that Nathan has an extremely rare X-linked syndrome called Norrie disease. It affects males by causing blindness at birth, with a good chance of moderate to severe hearing loss beginning at adolescence.Although they didn’t know it prior to Nathan’s diagnosis, Mary’s brother has the most severe form of the syndrome.

“Our whole world turned completely upside down,” said Mary. “Having a child with a serious illness or disability affects the entire family structure. It affects all of your relationships, and challenges your beliefs, your religious convictions, your very purpose in life.It elicits your greatest fears as you try to be a parent.”

Mary had to learn how to raise a blind child. But she still had to meet the needs of the rest of her family, while holding a demanding full-time job as an occupational therapy supervisor.

Over the course of fi ve years, her career and her role as the mother of A blind child became entwined. Mary became a low vision therapist. In an attempt to help and guide her son, she dove into this new career, working with patients for whom permanent vision loss came later in life. Mary took an active role in occupational therapy, clinical work, and research as well as many organizations that help those with vision loss.

Mary’s patients were unlike Nathan, who, having been born blind, never mourned the loss of his vision.

“My patients…take their impending loss of vision very hard and sometimes have fewer coping skills than Nathan or others who are congenitally blind,” said Mary. Her patients are often unaware of the technologies available to help them continue their daily routines.

While Nathan realizes that there will always be some limitations, he has become a resilient problem solver through his mother’s encouragement.Mary pushed Nathan to play and learn alongside sighted children, refusing to allow her son to believe that he was anything but normal – anything but successful.

Take sports. Playing baseball or softball is a rite of passage for lots of kids. Blind children, however, aren’t used to being able to pick up a baseball bat and run the bases. Mary started a Beep Baseball team, which uses sound-sensored balls and bases to facilitate play, for blind and visually-impaired children.

Encouraging her son’s independence was about more than fitting in socially.Mary realized early and still acknowledges that in a society where 70 percent of blind people are unemployed, the stakes are high for Nathan.

Nathan, now 20, graduated from the Virginia School for the Deaf and Blind in June 2011, and against great odds, finished his first semester at Liberty University. He is studying special education to become a teacher who specializes in working with students who are blind or visually impaired.

Mary’s personal mission to help her Son achieve his goals, despite his blindness and now severe hearing loss, mirrors her mission as an occupational therapist working to improve the quality of life for her patients.

Mary’s career has spanned 32 years, 15 of them as a low vision therapist with Richmond Eye and Ear Hospital downtown and now at their location at MEDARVA Stony Point Surgery Center.She has been with the program since its inception in 1997.

Like Nathan, today’s visually impaired are challenging stereotypes, which can be another huge hurdle.

Mary works to educate people about blindness and vision impairment.

“The real problem of blindness is not the loss of eyesight,” Mary said. “The real problems are misconceptions, misunderstandings, and lack of information. It takes all of us to teach our children, and yes, sometimes even our co-workers, our own parents, and friends to be accepting of those with disabilities.”

The guiding principle of Mary’s parenting has been her desire to teach her son to be a problem solver and to ultimately be self-reliant. She keeps the same goals in mind with her patients. “In both cases, whether you are losing your vision or never had vision,” says Mary, “you need to have the tools and learn the skills to be independent.”

This summer, Nathan will learn to fly a plane, and if he gets his way, someday he’ll drive his own car.

Independent – and then some.

Not worried about the grocery list? Think of the family photos.

Visual impairment can come from anywhere.Hemorrhages, strokes, or accidents can compromise vision in an instant, while age-related diseases like macular degeneration, glaucoma, or diabetic retinopathy can cause gradual sight loss. While surgeries, corrective lenses, and lasers at first might help patients manage symptoms, these treatments are not cures. They don’t bring back the lost vision. When patients realize this, they visit the Sight Preservation Center at MEDARVA at Stony Point Surgery Center.

At this low vision rehabilitation center, director and specially-trained optometrist Jeff Michaels, OD, and occupational therapist Mary Bullock, OTRL, train patients to use the vision they do have. First Dr. Michaels performs a low vision evaluation to determine the patient’s eye health. Once he has determined the status of their eye condition, visual acuity, contrast sensitivity, and even the size print they can read, he hands patients over to occupational therapy.Mary begins with mapping patients’ blind spots and teaching them how to use the visible area remaining.

“It’s not as easy as it sounds,” said Mary.A patient with a severe blind spot may need to look five feet to the right to focus on Mary’s face.

Once patients work on finding and using their remaining functional vision, Mary breaks out the technology.

Each patient comes with a different impairment as well as a different set of needs. School-age patients want to be able To succeed in the classroom. Others need to continue working. Because the majority of the center’s patients are older and have macular degeneration, most are retired and want to be able to read, draw up insulin, work on hobbies, or just view pictures.

Based on these needs, technology exists to help them, from oversized keyboards to closed-circuit televisions. Let’s start with the magnifiers. These are not the bug-frying toys of your childhood. Patients have walked into the Sight Preservation Center with grocery bags of magnifiers. Some bring in their homemade contraptions – two or three magnifiers taped together for increased power. But at this point, these traditional store-bought products are not enough.

At the facility, patients can sample handheld magnifiers, which usually work better than glasses. Some leave room for people to write checks under them. Others should be placed flat on the surface. Many have lights.

“We usually recommend light,” said Mary, who added that everyone needs more light to see as they get older. Think church, or restaurants. Dim lighting isn’t so romantic when you can’t read the menu.

For many patients, it’s hard to get used to the fact that they may need different lenses depending on the task.

Mary rummaged through her box of sample lenses. “You might need this one for reading or this one for seeing the aisles at the grocery store,” she said, picking up a light-up magnifier and then holding a minitelescope- looking lens to one eye. Next, she pulled out a pair of glasses with extra lenses that look like something a dentist might wear. These help many watch television.

Then you have closed-circuit televisions (CCTVs).

These expensive pieces of equipment are also some of the most enabling. Place anything under the camera lens, and you can see that magazine, or food package, or newspaper on the screen in front of you.Then toggle the settings to match your eyesight. CCTVs can zoom in – we’re talking all the way in – up to 85x. But they can also increase contrast and change colors, which can be just as important.

Diabetic patients, for instance, need to read the nutrition facts on colorful dinner packaging, but often cannot. These CCTVs can display the packaging in pure black and white for optimum contrast. They can also display text as white on black, black on yellow, or a variety of other configurations depending on patients’ needs.

CCTVs also make enjoying photos much easier. Patients want to see grand- and great grandchildren, reminisce over travel photos from trips with their spouses, and pull out photos from high school days. Mary will often ask a family member for a photo and won’t tell the patient who’s in the picture.
When it is magnified, the emotions can be overwhelming.

“There have been a lot of tears shed in this clinic,” said Mary. And they weren’t all from patients, she admitted.

With swiveling heads and long-distance cameras as well, closed-circuit technology helps severely impaired patients perform a variety of tasks. The ability to write checks enables some to regain financial independence.Others use CCTVs for wood carving, putting on makeup, sewing, knitting, and crocheting, while some are able to draw up their own insulin. One patient uses the equipment while he’s fixing lawn mowers.Others hook them up to computers for work, or to see the board in a classroom.

Computers can be another part of the equation. For those patients that are still working or in school, or the retired who Want to use online banking, email their grandchildren, or even write a book, computer software products are available to aid the visually impaired. With similar magnification, color, and contrast capabilities as the CCTVs, the products also offer more visible cursor options.

If a patient is beyond using these technologies, the center also helps patients work with audio technologies including audiobooks, computer software, and scanners that convert printed words to audio.

Whether they need a clock with enlarged numbers or a whole package of software, some patients cannot afford these tools; none are covered by health insurance.
That’s when Mary and Dr. Michaels begin to advocate on behalf of their patients with school, employers, and other funding sources.

At the end of the day, the successes Mary and Dr. Michaels celebrate with the patients are both big and small: employment, education, financial independence, the ability to drive. And yes, making out that grocery list item. Oh, honey mustard. Got it. 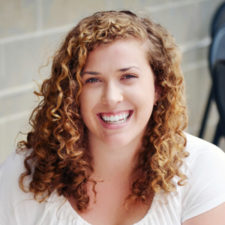 Sarah is a Richmond-based freelance journalist and proud JMU alumnae. She is a passionate storyteller who loves meeting new people and learning new things.