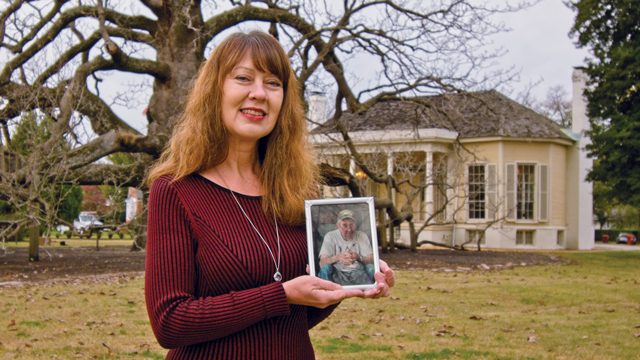 How Caregivers Can Help Patients and Doctors Connect

Tina Burton says that for most of her life, her dad’s happy place was “outside, framing houses in the sun.” A lifelong carpenter, he started working with his own father when he was a boy of ten.

“His whole identity was in being able to swing that hammer,” the lifelong Colonial Heights resident recalled. “When he couldn’t do that anymore, it was really hard.”

Bill Burton’s first tough diagnosis was bladder cancer, which set off a whirlwind of doctor visits and complicated treatments. Tina began to accompany him on these appointments, mostly for transportation and moral support. But later on, when a new diagnosis of Parkinson’s disease began to slow his mental processing and threaten his independence, Tina found her role at doctor visits becoming much more important.

“If the doctor said to do these exercises or take that medication, we couldn’t trust that he would tell us,” she said. “He didn’t mean to be deceptive, but my dad didn’t like talking about himself and really didn’t like being viewed as weak or sick.”

And providers needed Tina’s help, too. No matter how thorough their knowledge or how sound their advice, little things were keeping Bill from fully trusting or engaging with them. Knowing that his health and happiness depended largely on a full, honest exchange between doctor and patient, Tina said she got very good at making sure both parties really understood one another.

Many caregivers find themselves in this position of facilitating communication between their loved one and a provider, for a variety of reasons.

Sometimes the diagnosis comes with symptoms like memory loss or impaired speech that make communication difficult. For Bill, Parkinson’s disease meant he took a while   to process and respond to questions, even though he had heard them clearly. “He could get really irritated when people repeated questions,” she said. “I had to explain that he heard them fine. He just needed time to process and answer.”

If the diagnosis comes with a threat to independence, that can present another obstacle. Patients might hesitate to mention difficulties they’re having if they fear it means losing their ability to work, drive, or live without help.

“Dad had spare keys hidden all around the house,” said Tina. “He was anticipating an order to stop driving, so he was trying to be ready to work around that when his keys were taken away.”

Relaying this to her father’s providers helped them understand not only that he needed a thorough explanation of the dangers of driving with impaired processing and motor skills, but that it was a sensitive situation they should handle with care.

Dangers in the Disconnect

Whatever the reason, when a patient and doctor aren’t connecting, the results can be more than just a frustrating visit. A recent University of Michigan study found more than a third of patients over fifty often felt their doctor was recommending tests and medications that weren’t really necessary. Even worse, more than 40 percent of those skeptics were agreeing to the recommendations anyway.

At best, that’s a whole lot of wasted healthcare dollars. At worst, it means the lack of a thorough, honest exchange could endanger patients – either by having them submit to interventions they don’t need, or by leaving them skeptical enough to disregard perfectly sound medical advice.

Other studies found that a third of adults with chronic illnesses were not telling their doctors when they had stopped taking medication as prescribed, and that not even half of patients could name their diagnoses or medications after discharge from a hospital stay.

Beyond the prevention of errors, the connection patients feel with their provider has been shown in multiple studies to improve their adherence to helpful treatments and their confidence in their ability to stay well.

Multiply all of this by the growing number of providers seen by someone with several diagnoses, and it’s clear how important honest, open conversation can be.

As Tina noticed some of the communication barriers that could threaten Bill’s health, she adopted habits to help him and his providers hear each other loud and clear. It began with a little legwork before each visit.

“I started to type up lists of the things providers should know,” she said. “Call him Mr. Burton, not Bill. Address him, not me.”

She also recommends letting the provider know if the patient will need large-print material to read, or if there are mobility, vision, or hearing issues that might get in the way. If the patient has pet peeves (like an aversion to being called “sweetie” or “honey”), that is worth mentioning, too.

For the patient, you can help prepare by calling ahead to determine exactly what the appointment will entail, how long it’s expected to take, and find out a little about the background of who they’ll be seeing.

Tina also recommends understanding and respecting generational differences that may come up. Consider taking notes on paper instead of your smartphone, as some older people find it disrespectful to be “playing on your phone.”

And despite the hesitation to trust doctors at times, many older patients will trust the word of an authority figure above all else.

“This actually happened with my grandmother, not my dad,” said Tina, “but she was very suspicious when the pills she had been taking forever suddenly looked different. I told her that the pharmacist said they were just coming from a different manufacturer, but she still didn’t want to take them. So, I took her to Walgreens and let the pharmacist explain it directly to her. That was all she needed – to hear it from the professional.”

Outside the doctor’s office, Tina found lots of ways to take the sting out of this phase of her father’s life.

For starters, she recommends offering independence and control where you can. If someone’s diagnosis is threatening his ability to get around and do the things he used to do, find ways to preserve his self-determination. If he needs home health care services, keep him involved in the hiring process so he’s in control of who will be coming into his personal space. If he can no longer safely drive, let him choose the route you take.

“Dad only liked to travel certain routes,” said Tina. “So when he lost the ability to drive, it helped him to feel in control if he could be the navigator. Even if his way was slower or less direct than what I would have chosen, we went his way. I actually saw a lot of nice scenery that way.”

And make a habit of ending doctor visits on a high note. If each trip to the neurologist is followed by a stop at a favorite barbecue spot, it becomes less of a chore and more of a treat. Tina said that since her dad’s death, those barbecue lunches are among her sweetest memories of him.

“I actually took him for coffee the day he died,” she said. “I’m so glad we had that time.”

Seven years after her father’s death, Tina has bittersweet memories of his last years. She is glad she was able to be there for him during difficult times, but she regrets that he had to face them at all.

“It was hard,” she says. “Parkinson’s is so much harder on men who do physical labor all their lives. There’s so much more to let go of.”

Still, she relished her quality time with the man she described as a “funny and very emotionally giving” father, someone who had talked her through schoolyard bullies and a tough start at college.

“He was not afraid to cry,” she said. “And he was in love with my mother until the day he died.”

“He played pranks sometimes, even with the medical staff,” she said. “He would pretend they were hurting him when he was actually fine. As soon as they looked alarmed, he would just laugh.”

Bill’s humor, sincerity, and big heart are all qualities Tina says she has emulated throughout her life – and she’s glad she had them in her role as caregiver.

“To be so capable and strong his whole life made it more difficult in the end,” she said. “He was always the protector, but then it was my turn to look out for him.”

The National Institute on Aging has some helpful guidelines for caregivers hoping to make each doctor visit as pleasant, honest, and productive as possible:

Bring a list of questions and concerns. This includes the ones the patient has, the ones you have, and the ones any other family members or caregivers have mentioned. They might all be different, but together they can give the doctor a clearer picture of who she is treating.

Bring a list of all medications and supplements the person is taking, whether prescription or over-the-counter. Make a note of the dosage and frequency, or bring the bottles themselves so you have that information from the labels. The doctor may not know what others have prescribed or purchased outside of her advice.

Make it a conversation with the patient, not just about the patient. If the doctor is addressing only you, redirect her to the patient. Don’t answer on the patient’s behalf unless you are asked to. Try to clarify that you are there for support and clarification as needed.

Respect the person’s privacy. Leave the room when your loved one asks, whether it’s because of a private discussion or a delicate examination. Privacy and bodily autonomy often feel under attack when someone is very sick.

Ask about some helpful resources in your community. The provider may know about classes, support groups or other programs that can help you and your loved one take better care of yourselves. Caregivers deserve good care themselves, and there may be a support group out there that’s just what you need.

Lia Tremblay is an Emmy-winning writer and editor who specializes in healthcare and science topics. She has written several articles for RFM, including reviews of local theatre productions. She lives in Colonial Heights with her husband and their son.