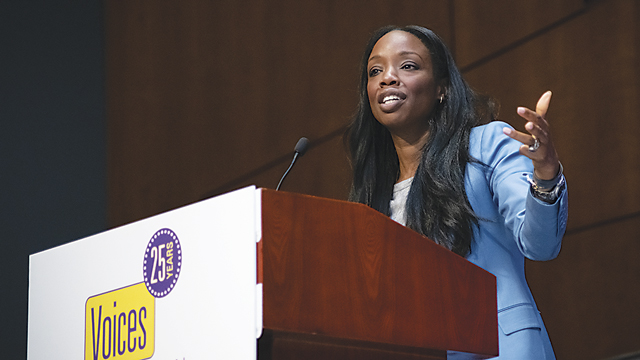 Richmond is still savoring the honor bestowed on Richmond Public Schools teacher Rodney Robinson, who was named National Teacher of the Year this spring. Robinson, who teaches at the Virgie Binford Education Center in the Richmond Juvenile Detention Center, is beginning his year-long tour of the country, talking about the importance of diversity and equity in education. Robinson exemplifies the power of caring adults to help children who have experienced trauma overcome this adversity and succeed in school and in life.

In an interview with the Richmond Times-Dispatch, Robinson noted that since he was named Richmond Teacher of the Year in November 2017, he has known twenty students who were killed and thirty more who were shot. Most of the young people he teaches have experienced multiple adverse childhood experiences (ACEs) that can affect their behavior as well as their mental and physical health. Violence at home or in the community, mental illness or substance use by a household member, abuse and neglect, or parental absence due to death or incarceration (all considered ACEs) are not rare occurrences for Robinson’s students.

In fact, in Virginia, almost one in five children has experienced two or more ACEs. When children experience trauma as a result of ACEs, their bodies are flooded with stress hormones that make it difficult for them to concentrate in school and build trusting relationships. Behaviors that help keep them safe from violence at home or in their neighborhood can get them in trouble at school.

With traditional school discipline, such behavior often sets students on the school-to-prison pipeline (the route taken by Robinson’s students at the detention center) because adults see the behavior and ask, “What is wrong with you?” A trauma-informed approach rethinks the entire method of school discipline by asking, “What happened to you?” As Robinson said in the Richmond Times-Dispatch article about his students, “They need love and care.”

Fortunately, Robinson is not the only professional trying to make a significant difference in the lives of children struggling due to ACEs. Nearly a thousand teachers, social workers, police officers, mental health counselors, and healthcare professionals gathered at the Greater Richmond Convention Center on April 25 to hear national expert Nadine Burke Harris, MD, give the keynote address at the Virginia Summit on Childhood Trauma and Resilience, hosted by Voices for Virginia’s Children.

Dr. Burke Harris, a pediatrician who was named the first-ever Surgeon General of California earlier this year, shared with the audience the science behind ACEs: Childhood adversity can affect every system of the body, from brain development to the hormonal and immune systems. It can even affect a child’s DNA. The more ACEs to which a child is exposed, the greater the likelihood of developing chronic health problems, such as asthma, during childhood. But the health effects don’t stop after childhood – exposure to ACEs greatly increases the likelihood of developing seven out of ten leading causes of death in adults, including heart disease and cancer.

Knowing the profound effects of ACEs on population health, Dr. Burke Harris has made it her mission to share this knowledge widely, along with the knowledge of what can help buffer the effects of trauma and build resilience. The most effective buffer is supportive relationships – something that sounds familiar to Rodney Robinson and other teachers who work to build trusting relationships with their students. Additionally, mindfulness/meditation practice, balanced nutrition, regular exercise, mental healthcare, and quality sleep are evidence-based strategies for addressing trauma and building resilience.

Lifting Up Children of All Communities

While individual teachers who are trauma-informed are absolutely essential in combating trauma and building resilience, they can’t do it alone. Caring professionals who serve children need to be embedded in systems that are trauma-informed – bringing resources and policies to bear on education, healthcare, child welfare, and law enforcement. Building trauma-informed systems requires that policymakers learn how to address this public health challenge.

In Virginia, both Governor Ralph Northam and First Lady Pamela Northam have taken on the issue of childhood trauma through the Governor’s Children’s Cabinet. The Northams spoke at the Trauma Summit about their commitment to addressing childhood adversity, both at the individual and community levels. Richmond-area senators Jennifer McClellan and Siobhan Dunnavant and delegates Jeff Bourne and Chris Peace participated in a policy panel, along with Virginia’s Secretary of Health and Human Resources Daniel Carey. They each bring their personal experiences as well as their professional backgrounds to the issue, and they discussed recent efforts to address trauma in child welfare, in schools, and in mental health services.

Governor Northam’s signature 2-year budget, to be released in December, is a prime opportunity to invest in trauma-informed systems. Secretary Carey announced at the Summit that the Northam administration has designated a staff person to coordinate trauma-informed policies across executive branch agencies, helping state government to better incorporate the research about what works for children and families. Child advocates will be engaged in continuing to educate policymakers about solutions that prevent trauma and promote resilience for children as we plan for the 2020 General Assembly session.

If you’d like to learn more about ACEs and what’s happening in Virginia, there are some great resources available:

• You can watch Dr. Nadine Burke Harris’s keynote address and the policy panel from the Virginia Summit on Childhood Trauma and Resilience at vakids.org.

• You can learn more about childhood trauma through a series of issue briefs written by the Family and Children’s Trust Fund (FACT) of Virginia at facts.virginia.gov.

• You can learn more about the Greater Richmond Trauma Informed Community Network (TICN) at grscan.com.

Meanwhile, we’ll all be following Rodney Robinson’s tenure as National Teacher of the Year as he shares his message about addressing the needs of students who have experienced adversity and trauma.