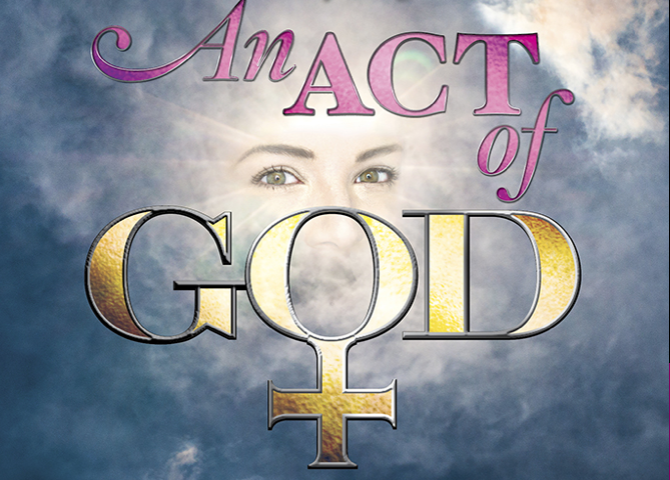 Jan Guarino was all in when she was asked to direct Richmond Triangle Players production of An Act of God, opening March 1.

“First, it’s a comedy, which I love. For a comedy, it was delicious,” says Guarino, a well-known actress in the Richmond community. “I had never worked at RTP before and I thought it seemed fabulous and it all sort of played out.”

Part of the Acts of Faith Festival, An Act of God features God, who would like to clear up some misconceptions and errors in translation that have plagued mankind for all time. God is here to tell it like it is, to answer the tough questions that humankind has grappled with since Genesis and end the debates once and for all.

An Act of God had its own genesis in playwright David Javerbaum’s best-selling book The Last Testament: A Memoir of God. Javerbaum is the former executive producer and head writer of Comedy Central’s The Daily Show with Jon Stewart, which earned him eleven Emmys, two additional Emmy nominations, two Peabody Awards and Television Critics Awards for both Best Comedy and Best News Show.

Many actors and actresses, including Jim Parsons of Big Bang Theory, Sean Hayes of Will & Grace and Academy Award-nominee Kathleen turner, have played the title role since the show’s 2015 Broadway premiere at Studio 54. The Richmond Triangle Players production marks the first show with an all-female cast as well as a female director, costume designer, scenic painter and production stage manager.

And that makes Guarino proud. “It’s been a lot of fun. I had never worked with Maggie Bavolack – who plays the title role – and I had always wanted to work with her. Boy is she funny,” Guarino says.

Guarino would like to bring a softer side to the show. “In the wrong hands, you could be snarky or mean,” she says of the title role. “I keep it lighter and not mean. God just has to shake things up a bit and start over.”

The show is basically a one-woman show with the help of two trusty archangels. “Maggie is talking to the audience mostly. She is such a good actress. She makes it work. I point her in the right direction and she just gets it,” Guarino says.

Bavolack, who won the Richmond Theatre Critics Circle Award for Best Actress in a Play for TheatreLAB’s production of Riding the Bull, says the play is “right up my alley. I’m a comedic actress. This show has a lot of humor, but also a lesson toward the end,” she says.

One of her biggest challenges is learning all the lines – she has thirty pages of dialogue. “This particular show also gives you a little improvisation and it’s been fun to do that,” she says.

Bavolack can adlib “like nobody’s business,” Guarino says. “If she gets feedback from the audience, she will riff.”

God being played by a woman brings a different context to the jokes in the show. “You have to have a woman’s perspective every once and a while,” Bavolack says.

Philip Crosby, RTP’s executive director, was aware of the play from its Broadway run. It was on his radar, especially for the Acts of Faith Festival. “One of the most important things we look for every year is what are we going to do about the Acts of Faith Festival,” he says. “We take it very seriously. We don’t just put in a play and see how we can make it fit. We pick those we know have a faith component.”

There is a false narrative in society that you can’t have faith if you are gay or lesbian, Crosby says. “Our mission at RTP is to say that is wrong and here is why. Sometimes we do it in strong ways and sometimes in light ways.”

This is the first time that An Act of God is being done in Central Virginia. “For the Acts of Faith Festival, I think this one hits it square on the head,” Crosby says.

Guarino hopes people who see the show talk about it afterward. “It lends itself to talk about religion and what is religion,” she says, noting that God makes new commandments and the last is to believe in yourself first. “That’s extremely important and uplifting. Know yourself first before you blindly follow something in your life. I think it’s a very positive message.”

An Act of God runs through March 23 at Richmond Triangle Players. Go here for showtimes and tickets.