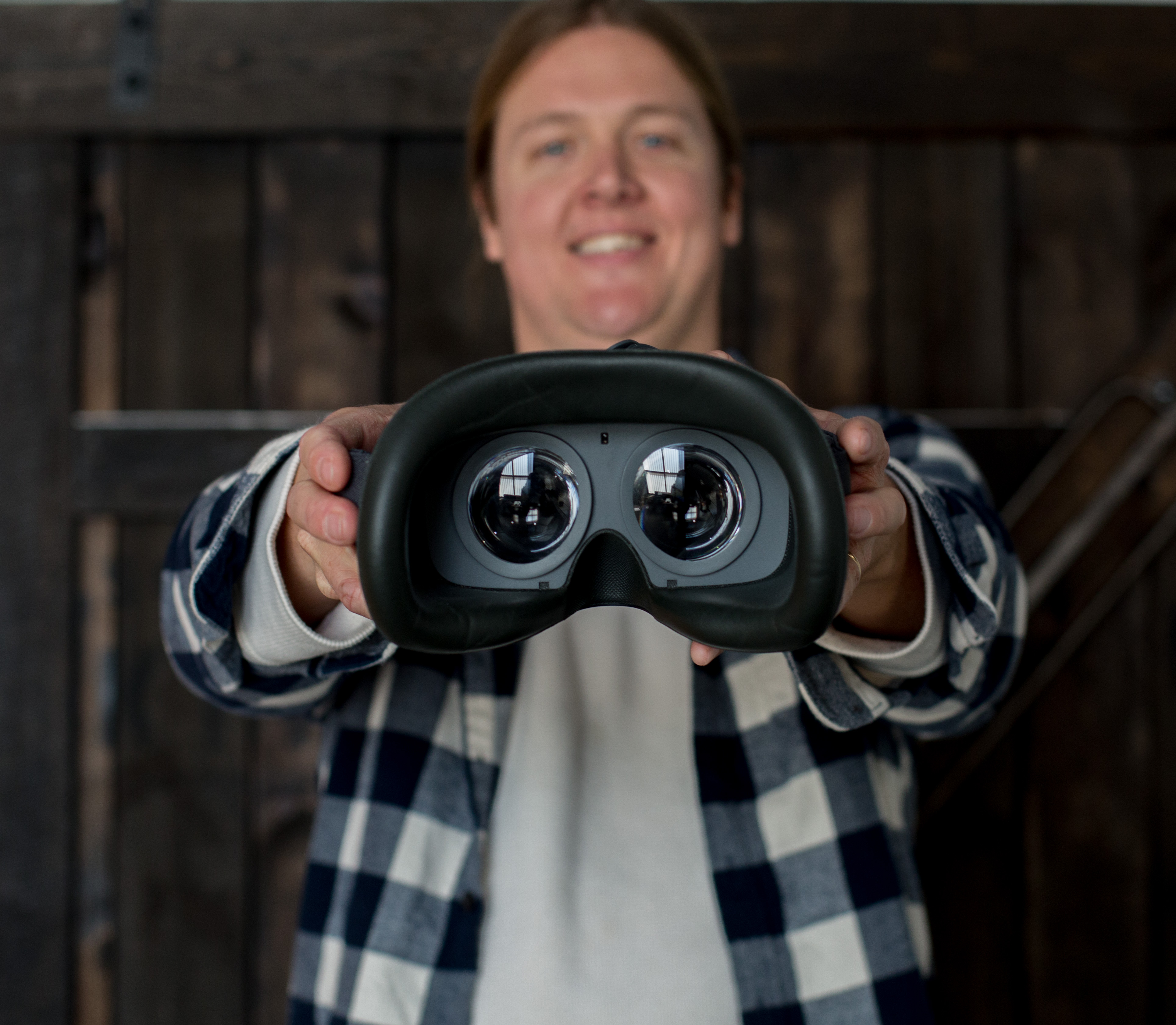 By most standards, David Waltenbaugh had an exceptional childhood. He grew up in a close, loving family in Midlothian.

“When I was a child, I skated through life like a lot of children do,” he says.

But when he turned seventeen, the world suddenly became a place of fear and anxiety at every familiar turn. “I had always been a somewhat risk-adverse, play-it-safe kid,” he says. “But this came out of left field.”

It was the middle of his senior year at Midlothian High School in the early winter when he started to notice changes in his thoughts and different patterns of fear and worry in things that would normally be benign events for him.

“I had some irrational worries. I have the tendency to catastrophize things. My thoughts would race through my mind and I wouldn’t be able to stop thinking about it. I would follow irrational logic to find the worst case scenario,” says David, who is now thirty-six.

As an example, he would take a test and perform poorly. He would worry about his grade and escalate the worry to the extreme. “I would think what if I couldn’t get into a good school and it would impact my ability to find a good job and establish a family,” he says. “I worried more about things that were out of my control.”

He also worried about losing a loved one. “I found myself in a pretty dark place. I was generally afraid with the things I was thinking and worrying about,” he says. “I was afraid to voice my concerns. I worried there was something wrong.”

The constant worry and fear became more than he could bear. He became physically and mentally exhausted, he says. “I just cracked. I reached rock bottom. I had depression and a sense of hopelessness. There was no way out of this dark place.”

His feelings forced him to talk with his parents and be open with his family about what he was going through. “It was hard, but it was what I needed to experience to ultimately get the help I needed at that point,” he says.

Waltenbaugh’s reluctance to tell anyone about his feelings and what he was dealing with is a common thread with mental health. But, addressing those feelings “with someone who cares or a therapist is the best thing you can do,” says David who was diagnosed with generalized anxiety disorder and major depressive disorder.

David is not alone. One in five adults in the U.S. experience mental illness and 17 percent of youth (ages six to seventeen) experience a mental health disorder, according to the National Alliance on Mental Illness. The Alliance also notes that 50 percent of all lifetime mental illness begins by age fourteen, and 75 percent by age twenty-four.

In recent years, several celebrities have spoken openly about their anxiety, including Carson Daly, Ryan Reynolds, and Michael Phelps. Now it is coming to light that the percentage of people dealing with mental health issues has risen since the start of the pandemic. More than two in five people in the U.S. are struggling with mental or behavioral health issues associated with the pandemic that include anxiety, depression, increased substance use, and suicidal thoughts, according to findings from the Centers for Disease Control and Prevention.

David feels fortunate that he was able to speak openly about this feelings with his family and to get the help he needed from a therapist and a psychiatrist.

“I give a tremendous amount of credit to my parents and their role in my journey with my struggles with mental health,” he says. “They never once questioned me or doubted me. They took it seriously from the beginning.”

Both of his parents worked, but when they needed to be with him and miss work they did “what they needed to do to support me and get me back on my feet during the first weeks when I was almost bedridden,” he says.

David’s depression and anxiety often follows a pattern. He experiences flare-ups anytime there is a significant life-changing event in his life such as getting ready for college, going to work after college, and starting a family.

David, who has been on medication since eighteen, managed his anxiety and depression pretty well when he was at Virginia Commonwealth University. He graduated from the VCU School of Business with a bachelor’s degree in economics even though he knew he had a creative spirit.

“From a pretty young age I had creative tendencies,” he says. “I was particularly drawn to music. My father was a huge music aficionado. He introduced me to rock and roll at a young age.”

Waltenbaugh worked in the world of financial investments for over a decade, a job that allowed him to settle down and establish a family – he has two children, ages four and eight. But there was something missing in his career. He felt unfulfilled.

“I wanted to be more creatively expressive, and I didn’t feel the individual connection that I wanted to feel in the capacity I was working,” he says.

He dabbled in music production, interning at recording studios around town. He thought he wanted to become a record producer, however he soon recognized that it was not an easy field to break into. That’s when he stumbled on virtual reality.

“I saw it as a new medium with a lot of opportunity for audio production in this new field,” he says. “I was admittedly skeptical like most people were and still are. I thought it was a next-generation video game system, just another means of more screen time for kids.”

But he saw a creative opportunity. He started researching what people were doing with virtual reality and found a whole world of VR outside of entertainment, in fields such as education and health care. “Looking at future forecasts, I saw that gaming is only a small percentage of the uses,” he says.

Tech Epiphany and the Pandemic

After filtering through the research, he had a watershed moment – that he could use virtual reality to help people with mental health issues.

“When I saw this new technology that research said could revolutionize mental health resources, it checked all the boxes for me. I was blown away,” he says. “I realized this is where I want to focus.”

He began dabbling with virtual reality production, taking a year or two to get a good understanding of the subject matter before starting his company RootVR in October 2018. The company focuses on mental health. He started building software platforms and narrowing the content. After building a prototype, he began market testing, interviewing parents of kids diagnosed or having struggles with mental health. He conducted research with clinicians and mental health organizations.

At the end of 2019, he began reaching out to his target audience – therapists, counselors and organizations providing behavioral health resources to adolescents – helping them create more imagery and productive forms of clinical intervention. He is also working on an app that will provide wellness resources.

“I wanted to get a feel for the possibilities of using virtual reality for mental health,” he says.

He was working with his first pilot program with the UMSF Child & Family Healing Center, a residential program that offers community services for children with behavioral and emotional needs, when the pandemic hit the country.

“We got off to a great start. But, unfortunately the pandemic started six weeks into the pilot and put that to indefinite pause,” David says.

While the pandemic has definitely thrown a curve at his plans for his company, it has also created some opportunities.

“There has been a noticeable shift in the public’s perception for the potential of virtual reality,” he says. “As soon as things shut down and people were social distancing and staying at home, more and more people began moving to virtual platforms. People are starting to realize the value add of virtual reality because it’s closer to mimicking real life interactions.”

Telehealth and telemedicine are also moving virtual, he adds. “You can use virtual reality to do remote therapy sessions.”

David is eager to get back to the work he was doing when the pandemic began because he knows the pandemic is “incredibly difficult for those with diagnosed mental health issues. It’s been shown there is an overall deterioration of mental health,” he says.

Even though he’s working on new opportunities that focus on virtual reality, he wants to

Since the COVID-19 pandemic’s disruption of his work with Root VR, David has joined co-founders Dr. Brook Parker-Bello, Chance Glasco, and Carlos Wallace in the creation of a new company called VR Eval, a virtual reality (VR)-based system of comprehensive evaluation, assessment, education, and therapy tools for professional mental health and human services providers who work with victims of trauma. Established in early 2021 and currently raising initial funds, the company hopes to combine leading experts in the fields of mental health, counseling, advocacy, and gaming to build an industry-leading platform focused on applying “tech-for-good” to build resilience, support, and wellness on a global scale.

“One of my primary passions when I started working with virtual reality,” he says, “was to create better access to mental health resources.”