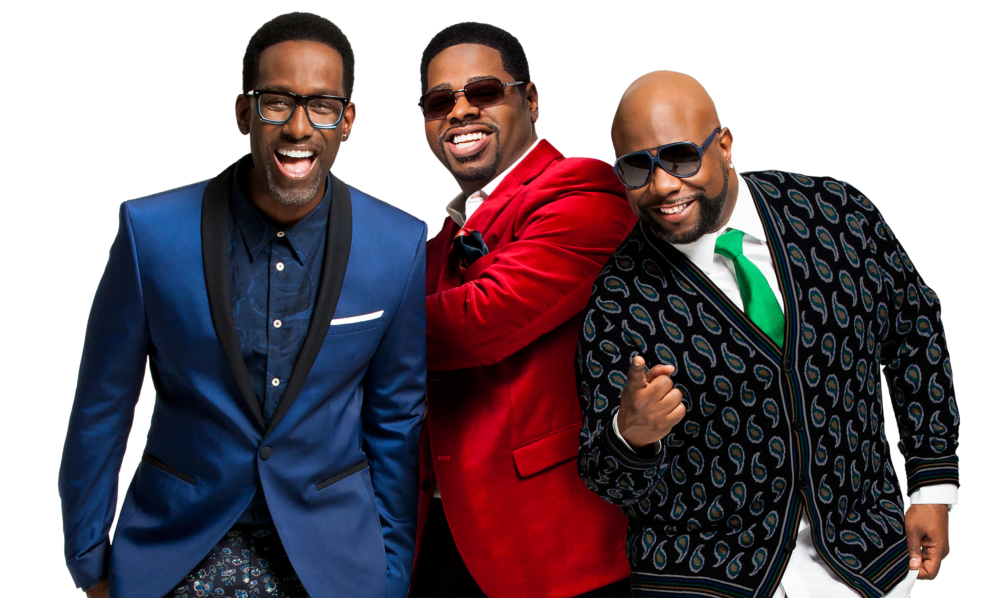 Nathan Morris, Wanya Morris, and Shawn Stockman of the iconic R&B group Boyz II Men look back at their journey in amazement. The group, recognized as Billboard magazine’s biggest boy band from 1987 to 2012, got its start at Philadelphia High School for the Creative and Performing Arts when the guys began practicing their singing in “the boys bathroom where our voices were our instruments,” says Shawn Stockman.

Ever since that time they have put a cappella music in the spotlight and on the charts. “We hope we have contributed respect for this lost art form,” Stockman says. “We find there is nothing like a cappella when it’s on point. Billy Joel told us after we sang ‘that’s how it’s done, that’s the magic of a cappella.’ We hope our contribution is giving that feeling we felt when we discovered it.”

The group, which will perform at Innsbrook After Hours tomorrow night, gained fame in the 1990s with the release of Motownphilly and It’s So Hard to Say Goodbye to Yesterday. They continued riding the charts to their number one single End of the Road in 1992. The song stayed at number on the Billboard Hot 100 for thirteen weeks. And, that was just the beginning of their hits.

Over the years, the group has won four Grammy Awards, nine American Music Awards, nine Soul Train Awards, three Billboard Awards, and a 2011 MOBO Award for Outstanding Contribution to Music. They also have a Casino Entertainment Award for their residency at The Mirage Hotel & Casino in Las Vegas and a star on the Hollywood Walk of Fame.

“It was one of the top feelings we have had in our career,” Stockman says of the star on the legendary Hollywood Walk of Fame. “Truth, we were the first ‘boy band’ to get one. After that week we got calls from ALL the other bands asking ‘how did you get that.’ That entire experience was magical.”

The Secret to Their Success

Growing up together in Philadelphia with shared experiences was definitely a plus for the group. Those experiences allowed them to share a vision from the start. “We all wanted to be successful and we grew up together learning things along the way and each experience taught us something different, but we always go through it together,” Stockman says.

The group has been traveling the world together for over twenty-eight years now. “We’ve  become brothers and like a family, we stick together through good times and bad,” Stockman says.

What keeps them together and successful is their philosophy as musicians and as artists. They are committed to making timeless music. “We are willing to work hard and ultimately we do it all for the fans,” Stockman says. “That’s how we’ve always approached our careers and our fans have responded well to it and respected it.”

Back in the day, they would never have thought they would become as successful as they have over the years. “It’s humbling to say it now,” Stockman says. “We owe all our success to our fans and looking back we just appreciate all the people who came out to hear us sing and continue to do so to this day.”

Their goal was to do something their parents would be “proud of,” Stockman adds. “We never thought we would even be on the radio. It’s kinda cool to remember that feeling of dreaming and that is what might keep us going, because we still can’t believe it happened for us.”

They were extremely honored when Philadelphia renamed a section of Broad Street to Boyz II Men Boulevard. “Having a street named after us was such a cool experience and it’s fun to visit when we’re back home,” Stockman says. “We kept staring at it like ‘damn, we use to walk this street to school and that’s us up there?’ We kept checking our GPS to see if the BOYZ II MEN name came up and it did.”

Humble, Proud, and Giving Back

The one thing the group is most proud of is seeing a parent with their kids sing every single lyric to a song or seeing someone in the front row smiling and saying thank you. It’s also “having an audience in a foreign country where they don’t speak English, but they sing every single lyric in clear English,” Stockman says. “There’s so much pride in knowing that we’ve made that impact in the fans’ lives.”

The job doesn’t come without its challenges however. The biggest at the moment is traveling and being away from their families. “It can be tough to be on the road away from our kids,” Stockman says. “It’s hard to convince a 5-year-old it’s daddy’s job when you’re gone four months at a time. But now we have technology and that really helps.”

As a way to give back, the group started Boyz II Men House, an organization to help support causes they are passionate about. When the mass shooting happened at a concert in Las Vegas where the group has a residency at The Mirage, they wanted to help the victims, families, and the city. “We donated proceeds from our first show back because we wanted to show our support for the incredible city and the people who’ve become our close friends and family over the last few years,” Stockman says.

It was important for them to start the charity. “Growing up and throughout our careers we had to work hard so we’ve never taken our success for granted,” Stockman adds. “It has made us realize that so many people look up to us for inspiration so we make it one of our goals to give back.”

The group continues to live their legacy. It’s what they want to be known for when all is said and done. “A group of men who had a positive effect on the human spirit from around the world,” Stockman says.