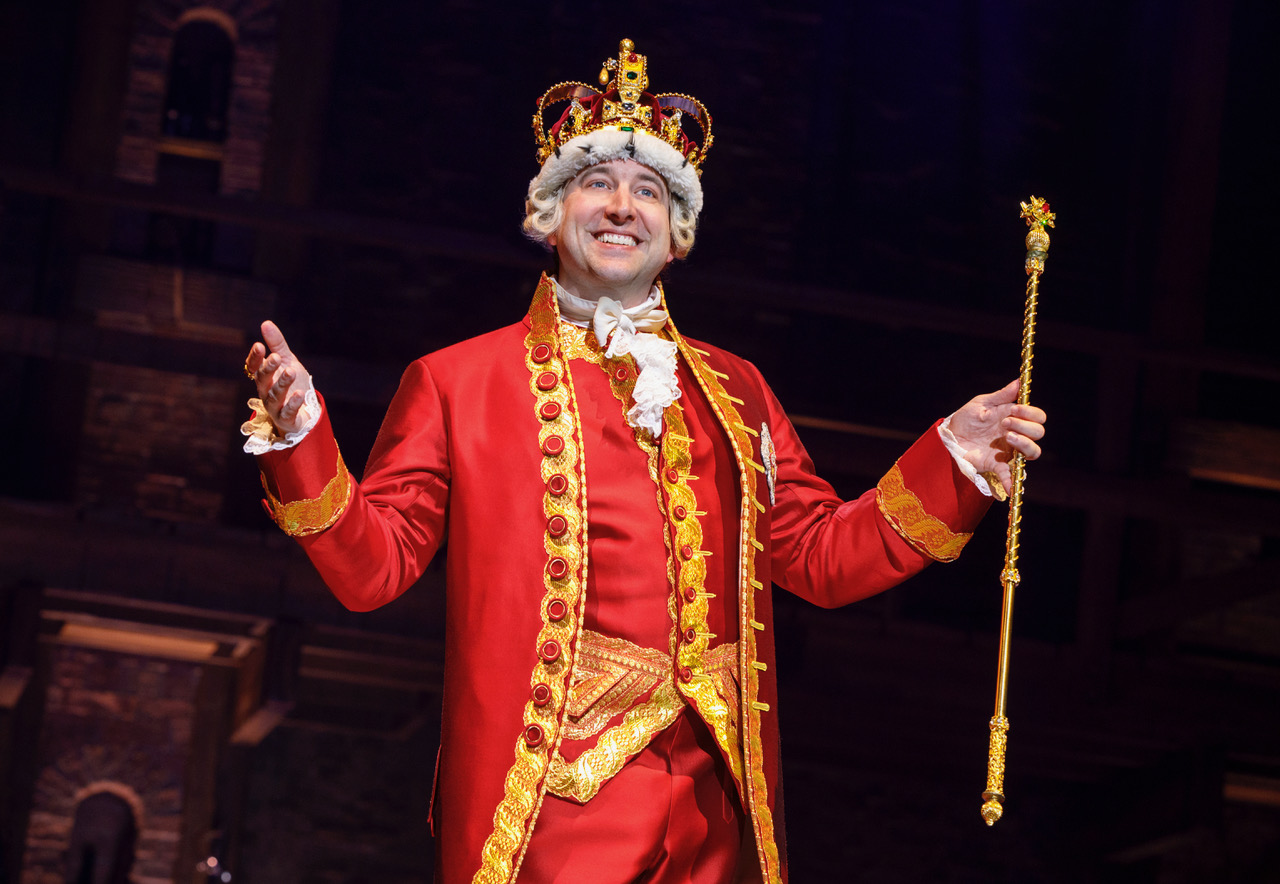 Actor Peter Matthew Smith finished his call and turned to his wife, Amy, after hearing he landed the role of King George in the touring production of Hamilton. “I don’t know if you understand how great this is,” he told her. “I am going to do this role as long as I can.”

The only bad part of that prized gig? He hated being away from his wife and young daughter, Addison, who is five. But when Hamilton calls, an actor doesn’t say no. By booking Hamilton and playing King George, Smith felt like he had “hit the  theatre lottery,” he says. The Broadway juggernaut, which plays at Altria Theater from November 19 through December 8, has chalked up sixteen Tony Award nominations and eleven Tony wins as well as the 2016 Pulitzer Prize for Drama.

For anyone who hasn’t heard of this phenomenally popular show with music, lyrics and book by Lin-Manuel Miranda, the production is, as you would guess, about one of America’s founding fathers, Alexander Hamilton. It incorporates a variety of musical genres, from hip-hop and rhythm and blues to pop and traditional-style Broadway show tunes.

Ironically, Smith had never seen the show before being offered the role of King George. The first time he saw it performed was with his touring company during rehearsals. “When the show first came out, my daughter was a newborn and I was in dad mode,” he says, adding that when he booked the show he thought, Oh good, I finally get to see Hamilton!

A Pittsburgh native, Smith started his professional career touring with Rent in 1998. After a year-and-a-half touring with the production, he transitioned into the Broadway show. Other Broadway credits include Fiddler on the Roof, Hairspray, Mamma Mia!, and Cry Baby.

In addition to Rent, Smith’s national tours include Memphis and Hairspray.

Smith was actually selling real estate – actors often take jobs in the interim between acting gigs – when he got the job with Hamilton. “I have been touring ever since,” he says. “I started with the show two years ago this January.”

Smith and his wife now live in central Pennsylvania, outside of York. A member of the media, she does the morning news on television.

He considers his job as an actor to be the “the best job in the world. I have been lucky because I have played many parts that I love,” he says, adding that one of his favorites was the role of Jerry in The Full Monty. “Any job we get as actors is a blessing. We are truly living our dreams. We get to play as a living and that is so much fun.”

Serving as the Comic Relief

Smith put the same amount of preparation into his role as King George as he does with every role he undertakes, especially if the character is a real person. “You do your research and try to find something you can latch onto; that you can use in your performance,” he says. “I watched the whole movie called the The Madness of King George and that was useful.”

King George is the “villain you love to hate,” says Smith. “When he steps on stage, it’s like the moment you can step back and breathe. The show is fast-paced to that point. He’s a slower pace. He doesn’t move as much on stage.”

He’s also the comic relief. People that have never seen the show don’t know that he will be “funny,” Smith says. “He’s annoyed with the American Colonies because they have left him and that’s something he latched onto in his life. One of his greatest failures was losing the Colonies.”

Miranda has given King George’s angst the feeling of a teenage relationship breakup. “What Lin-Manuel did that was so brilliant was he created a British invasion Beatles feel to it as the hook. It’s one of the easiest hooks to latch onto in the show,” Smith says. “By on his second entrance ,people say, ‘Oh the funny guy is back.’ I have such a great time with this role.”

When King George is first on stage he doesn’t move about much. “He stands still and sings,” Smith says. “I had to do most of my acting in that first tune like a film where you only see his facial expression.”

The crown Smith wears during his performance weighs about two pounds, a bit lighter than the original crown on Broadway. “If you tilt your head too much in either direction, you feel like you are going to fall over,” he says. “It does help with your posture.”

The king’s cape is also heavy because of the fabric. “When you turn to walk back upstage you could trip over it,” Smith says. “All of that informs how you walk. You also have lots of things around your neck and that constricts you vocally, too.”

Smith really enjoys the fact that people in the audience start cheering when his character steps onto stage. “It lightens the mood for me because there is less pressure,” he says. “It’s a great feeling to have that support without speaking a word. I enjoy that every time.”