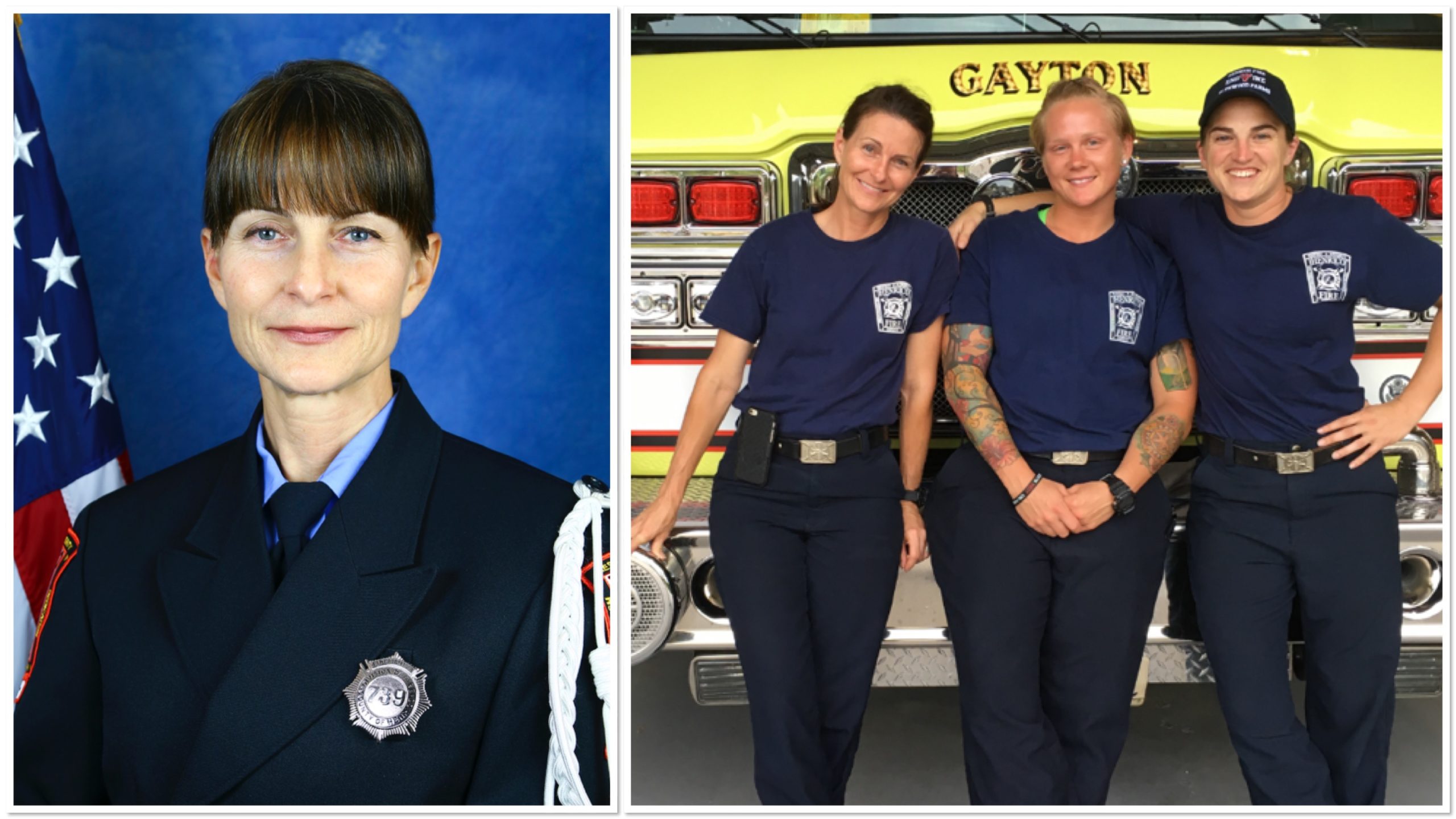 As the only female lieutenant and the oldest female firefighter in Henrico County Division of Fire, Michele Greep, fifty-two, feels like a mother hen to the younger females in the division. It’s a role she knows well. Greep is the mother of two children, 22-year-old daughter, Chloe, and son, Wyatt, nineteen.

“I feel it’s important to continue on the path I am on because females in the department don’t have anyone they can look up to in a higher position than firefighter,” she says about being promoted to lieutenant last December.

Currently, there are thirty females out of a total of 565 firefighters in Henrico County Division of Fire. The number of women in the division has grown from 1.8 percent in 2012 to 5.3 percent. Henrico Public Safety has made a concerted effort to hire women, says Captain Rob Rowley, Henrico County Fire public information officer. “Our overall goal is to always hire the most qualified people.”

The Division of Fire has made an “intentional effort to diversify the department. We tried to remove any perceived or real barriers,” says Andrew Snead, personnel coordinator for the division. “We want to hire a person with a heart for service. We will train and prepare you for the rest.”

Many people perceive the job of firefighter to be “a male job, not a job for women,” he adds. “Tearing down perceived barriers is our job. Members of the community are proud of our women firefighters.”

The division values candidates with work and/or team experience as well as community and/or military service.

Being a firefighter was not Greep’s first career. She put herself through school in San Diego working as a paralegal. When her children were young, she stayed at home for several years before reentering the workforce.

Greep didn’t think about a career as a firefighter until she and her first husband divorced and she became a volunteer firefighter in Chesterfield. “When I was eighteen, I wanted to be a paramedic,” she says. “I wanted to do emergency medicine.”

Early in young adulthood, she was putting herself through school and making “too much money at the law firm to go back to paramedic school, so my dream went by the wayside,” she adds. “Fast-forward thirty years. My son is five, and we drive by a fire department open house. One thing after another led me down this path.”

Greep joined the Louisa Volunteer Fire Department, and a short while later, she was offered a job in Henrico. She and her current husband – they met in Louisa – both work for Henrico Fire.

It takes preparation and stamina to meet the physical challenges of the job. The division is always looking for candidates with a background in team sports because athletes have focus and resilience. Greep says she has been a tomboy all her life and has led an active lifestyle. “I’m a runner. I do a lot of sports,” she says, noting she participated in Seal Team PT training as well as triathlons.

Passing her certification agility test, however, was challenging for Greep, who has a wiry build at five feet seven inches tall and one hundred fifteen pounds. The test starts with climbing a stairway wearing a seventy-five pound vest. At one point in the test, Greep had to drag a dummy weighing about one hundred eighty pounds through an obstacle course within a certain amount of time.

When she finished her test, she was ten seconds over the time limit. She redid the test a week later, an opportunity that is available for all candidates. Before taking the second test, she practiced carrying even more weight and equipment. “The next time I took it, I finished with about one-and-a-half minutes to spare,” says Greep, who is an advanced life support EMT, which “adds more stress and more training.”

All fire division candidates attend a 30-week recruit academy, which is followed by an 18-month probationary period where they continue training. “From day one they get a full salary as a recruit,” Snead says.

One of Greep’s constant challenges is the hours she has to put in each month. She works ten to eleven 24hour days each month, averaging a 56-hour workweek. “It’s a lot of hours,” she says, noting she hired a nanny, a nursing student whose father was a doctor in Charlottesville, when she worked 24-hour shifts in Louisa. “She was very responsible. I trusted her implicitly.”

Fire service is a “calling and not a job,” says Snead of the challenges faced by firefighters. “When they get here we often talk about the family appeal of the fire service.”

Firefighters may have several days in a row scheduled off. Many use that time to work a second job. Greep works part time in the tasting room of a winery. “It’s really relaxing,” she says. “Before that, I would just pick up extra hours at the fire station.”

Women bring a different perspective to the division that’s important when the team is on the scene. Every person on the team “has a different skill set they bring to the table,” Greep says. “Whether it’s something we learned in college or another profession, it takes everyone’s perspective. We need ideas when we are on the scene.”

She believes she brings more of mom perspective when she is responding to calls for children. Her son has Asperger’s syndrome, which is on the autism spectrum. “For so many reasons, my children are my inspiration,” she says.

Her experience with Asperger’s was important when she responded to a situation with a child who was severely autistic. “I was able to deescalate the situation,” she says.

Greep admits she puts pressure on herself all the time to be her best self. “I push myself hard,” she says. “I’m not sure where that comes from. It’s just who I am.”