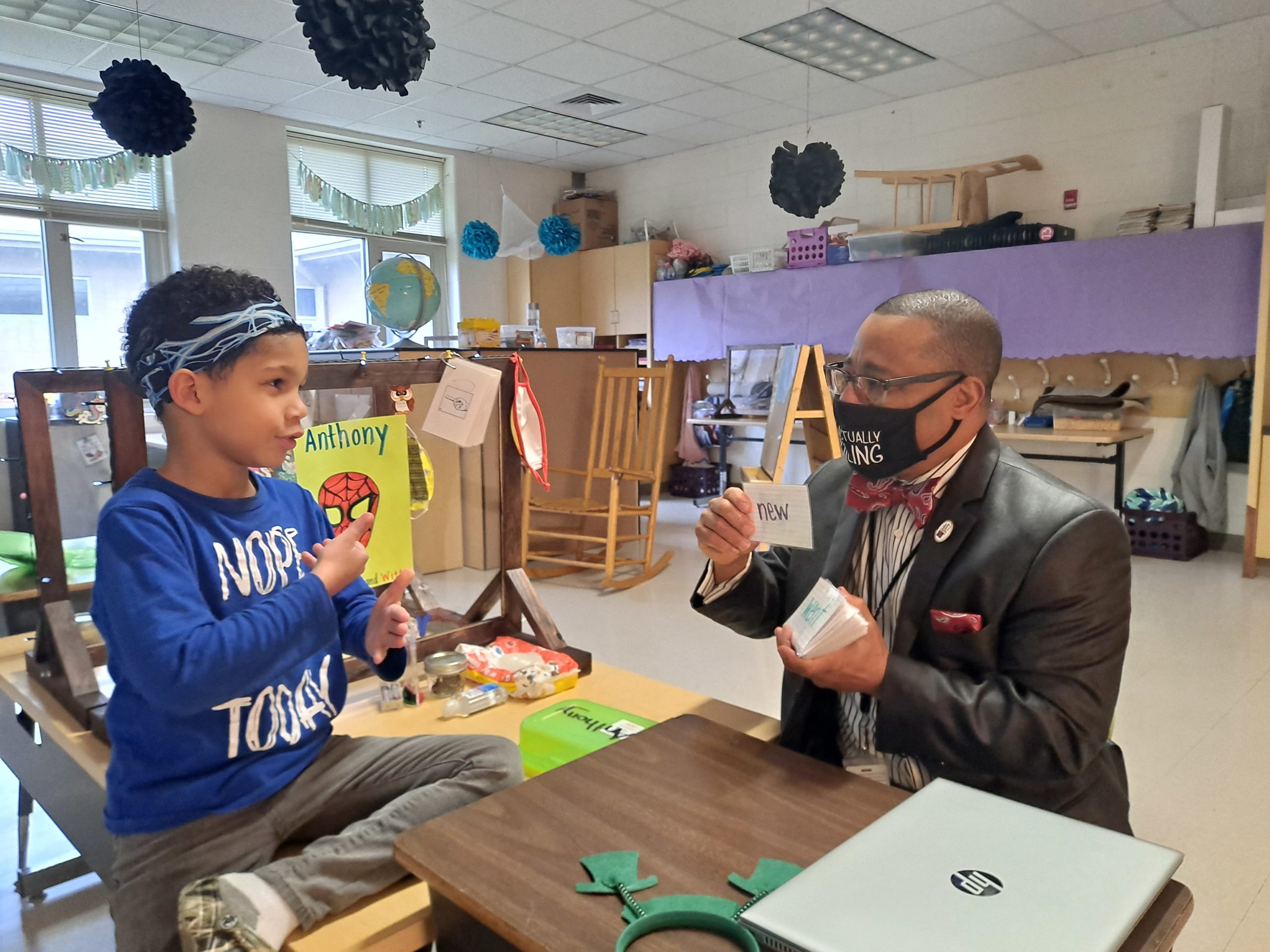 Dr. Herbert (Doc) Monroe’s gregarious personality, hearty laugh, and positive outlook reflect who Monroe is as a person and an educational proponent. But just because Monroe starts each day enthusiastically, it doesn’t mean his life has been without some struggles.

As a child, he was a severe stutterer who was an average student. He couldn’t sit still in class.

“I got in trouble all the time,” he says.

Understanding that Monroe had an excess amount of energy, his middle school coach suggested he get into wrestling. That simple recommendation started a years-long interest in wrestling, all leading up to a monumental a-ha moment. When Monroe couldn’t get into the United States Military Academy West Point or the United States Naval Academy because of low SAT scores, his high school wrestling coach told him to never let a number or test score define who he was as a person.

“He said, ‘you are much bigger than that.’ I try to model and communicate that same message to young people today,” says Monroe, assistant superintendent for Caroline County schools. “I want to be the light, the pied piper, the encourager. I want to let people who are struggling know that you, too, can do it. I want to help young people find their gift so they can be successful in life.”

His coach’s words were game-changing, he adds. “I was the Black kid who had an individualized education plan (IEP), the underdog. I tell people today that I want to make the underdog the top dog.”

What Monroe wants in his life and career is for “people to be happy and joyous. No matter what you are doing, I want you to be joyful,” Monroe says. “My coaches and mentors saw that in me. They coached me and mentored me to be an educator. They said, ‘That is what God has gifted to you.’”

Making His Own Way

A Richmond native, Monroe grew up in a well-educated, middle-class family. His parents were educators — his  mother was a middle school principal and his father was an elementary school principal.

With parents in the field, he saw firsthand the value in being a passionate and dedicated educational leader, so he decided to follow his parents’ footsteps. He graduated from Lock Haven University in Pennsylvania with a bachelor’s in educational psychology and elementary education. He received his masters of education from VCU and his doctoral degree in educational leadership and policy studies from Virginia Tech.

Monroe started his teaching career in Pittsburgh, Pennsylvania, in 1991, but moved back to Richmond in 2001 after the death of his father. After moving back, he began working for Henrico County and taught eighth-grade civics at Mt. Vernon Alternative School for four years.

“When I got there, they had a pass rate of 12 percent for civics. By my third year, the pass rate was 92 percent, the second highest in Henrico Public Schools,” he says.

“He told me whatever you are doing with these kids is phenomenal. If your dad was still living, he would say to become a principal. You have a profound effect on the community,” recalls Monroe.

Monroe says it’s his goal and mission to let kids know they can do whatever they are passionate about in life. “I just want to be part of their success story.”

He always has a smile and an encouraging word to share with students and with their parents.

“One of our single moms is a baker. I encouraged her to let her son partner with her in the kitchen. I try to cheer her on and let her know how talented she is, even without formal training,” he says.

Dr. Sarah Calveric, superintendent of Caroline County Public Schools, sees Monroe as “a passionate champion for students and staff. His energy is motivating and inspiring,” she says. “Dr. Monroe’s greatest strength is his ability to foster and nurture relationships. He does not know a stranger and has a gift for making people feel heard and valued.”

The father of four girls, Monroe’s day starts at five o’clock in the morning. He feeds the family pets – two cats, two dogs and a turtle– and finishes his exercise routine before starting on his daily emails.

“I set my goals for the day both personally and professionally. I get a lot done,” he says. “In the summer, I may go out on the deck and play my drums – conga, bongo and Latin percussion instruments. I may go into the local park and play my drums there. Then I go to work so pumped up. I am ready to rock and roll.”

In addition to his job, Monroe plays in two bands and mentors four young men. He also does motivational speaking and professional development.

“I focus most on diversity, equity, inclusion, and social and emotional learning. I work with educators to create that sense of belonging in their classrooms, schools, and school system,” he says. “I talk about building a sense of belonging where students can find their place and space and their passion so they can be successful in school and life.”

People who have seen him speak tell him he has a gift of motiving, educating, and inspiring people, a way of giving people hope and making them smile. And that is what motivated him to create his website, AWordfromDoc.com, where people and companies can connect with him.

Monroe is also partnering with Greenwood Elementary School principal Ryan Stein on a program called Leading from the Inside for principals. “It’s mostly about leadership, a development training program to identify and build capacity for people of color with the goal of having more diversity in school leadership,” Monroe says. “We have about 200 members in the cohort.”

Before Stein met Monroe several years ago, he had heard talk about his ability to connect with people. “One of his greatest strengths is how he makes people feel,” Stein says. “I look up to him. We both have an energy which I think has brought us together.”

The two educators often spend hours on the phone talking about education and helping others advance their career.

“This year we have been able to accomplish great things at Greenwood, and a lot of it is behind the scenes from Herb,” Stein says. “He helps me find a way. He sees no barriers. He has enthusiasm that is so contagious, and that has filtered into me.”

Monroe’s goal is to become a superintendent and inspire people through positive messages. He wants to make sure that teachers know they do make a difference in the life of a child by motivating, empowering, inspiring and educating each student to be the best they can be.

He wants to help people overcome adversity the way others have helped him overcome it in his life. “I want people to believe they can achieve,” he says.

When he was young and stuttered severely, he had a “speech teacher tell me when you have something important to say to the world, you can get it out. That is the kind of energy I am trying to put out there,” he says. “I am about peace and love. Turn to each other and not on each other.”

“Whatever you do never say can’t, say not yet but soon with perfect practice,” he adds.

Whenever Monroe has extra time, “it’s all dedicated to working with kids,” Stein says. “You won’t find a better human on the planet. The world needs more dancing, more music, more drums. The world needs a little more Herb Monroe.” 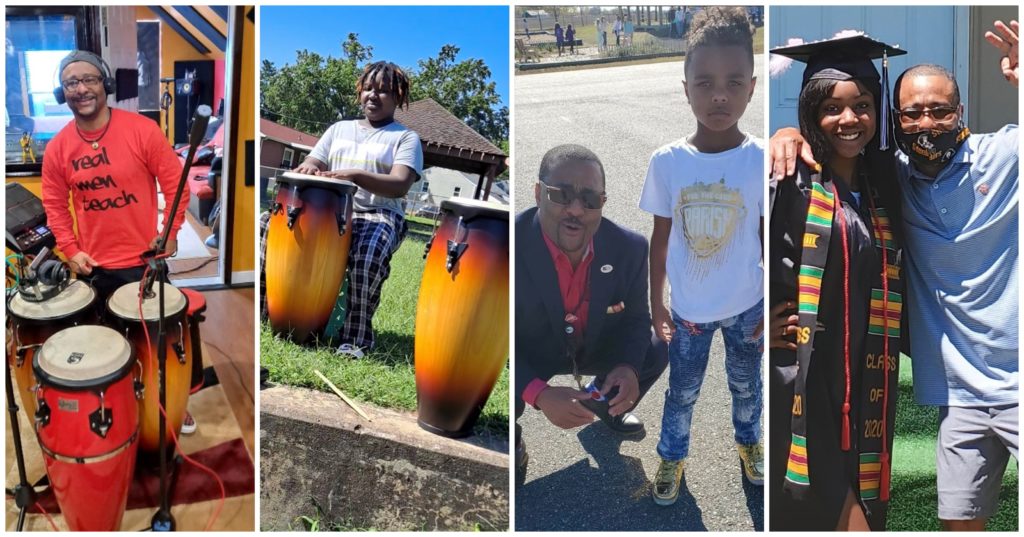