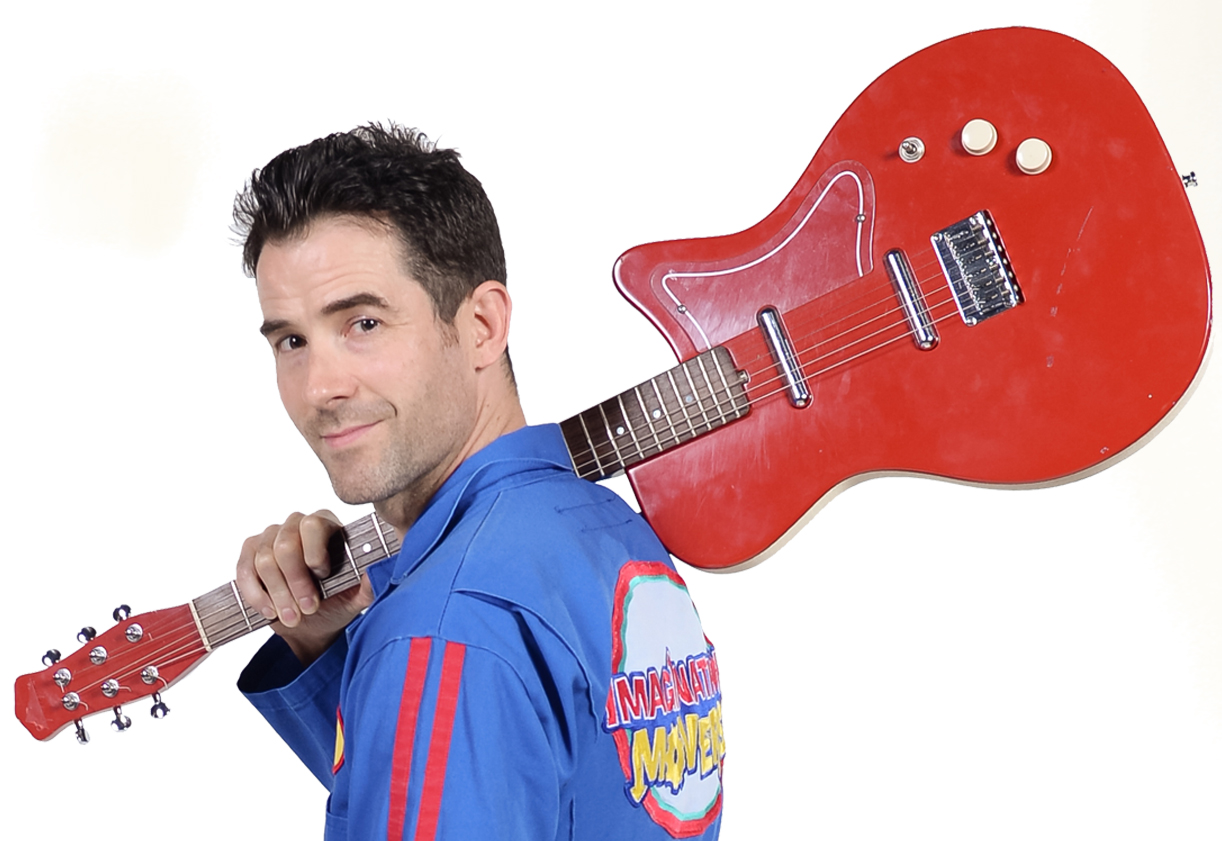 Reach high, think big, work hard, have fun! That’s exactly what the Imagination Movers have done and what they encourage kids around the world to do with their lives.

The group additionally received a Daytime Emmy Award for outstanding original song in the children’s show/animation category and has sold more than a million CDs and DVDs to date.

But none of this would be possible without the experiences they’ve had as parents. The idea for the group popped up in conversation in 2003 when the four friends were together at one of their children’s birthday parties.

“We were just talking about stuff and said someone needs to do something like Mister Rogers meets the Beastie Boys,” says band member Rich Collins, who has five children. “We started brainstorming a show and began writing songs.”

All four band members worked in different professions, from managing editor of a local newspaper to firefighter when the group formed. Collins had played music with fellow band member Scott Durbin prior to the group’s formation and band member Scott “Smitty” Smith played the guitar. Dave Poche had a stand-up comedy background. All were married and living in New Orleans.

They started the group in 2003 and discovered they worked well together in a creative environment. As a group “we bring out the best in each one of us,” Collins says. “It lifted everyone’s game.”

The song writing process began routinely after band members put their kids to bed at night.

Their children were the inspiration for their first song, I Want My Mommy, a preschooler themed song about nighttime anxiety. The group’s most recent song, Never Too Far, is personal for Collins. “It’s a song for my son who is away at his second year of college,” he says.

They built the group from the moment of inspiration to a global sensation one step at a time. First came an album, then concerts, appearances on television and later a DVD. “That’s what got in the hands of Disney,” Collins says of the DVD. “Our show was on-air in more than fifty countries. That opened up a world of touring. We’ve been road warriors now for a decade.”

Disney shot the show in the group’s hometown of New Orleans with local crew. “Our families and friends would be coming in and out and Disney was great about the community and families,” says Collins.

“It a big rock-and-roll experience,” Collins says about the approximately 70-minute show. “It forces everyone to participate and be a part of it. It’s a fun, weird, high-energy event. It definitely keeps your attention.”

The group performs up to forty dates a year, usually on weekends. A few years ago, they traveled for more than four months straight, playing one hundred shows. “Now our shows are more carefully curated,” says Collins, adding the guys look at their time on the road as a guy’s weekend away.

So what’s on the horizon for the group? First, all seventy-five episodes of Imagination Movers will be available on Disney’s streaming service, which is scheduled to begin next year.

“We also trying to make new content for a fun road story above the Movers,” Collins says.

Imagination Movers will perform at 3 p.m. on November 11 at Camp Concert Hall, Booker Hall of Music at University of Richmond’s Modlin Center for the Arts. For ticket information, go here.

After months of having people follow her medical progress on social media, Gal, a medium-sized…

By most standards, David Waltenbaugh had an exceptional childhood. He grew up in a…

A Young Performer’s Virginia Roots and Dancing During a Pandemic

At the age of five, JT Church knew he wanted to dance. The talented youngster…

advertisement
Back To Top