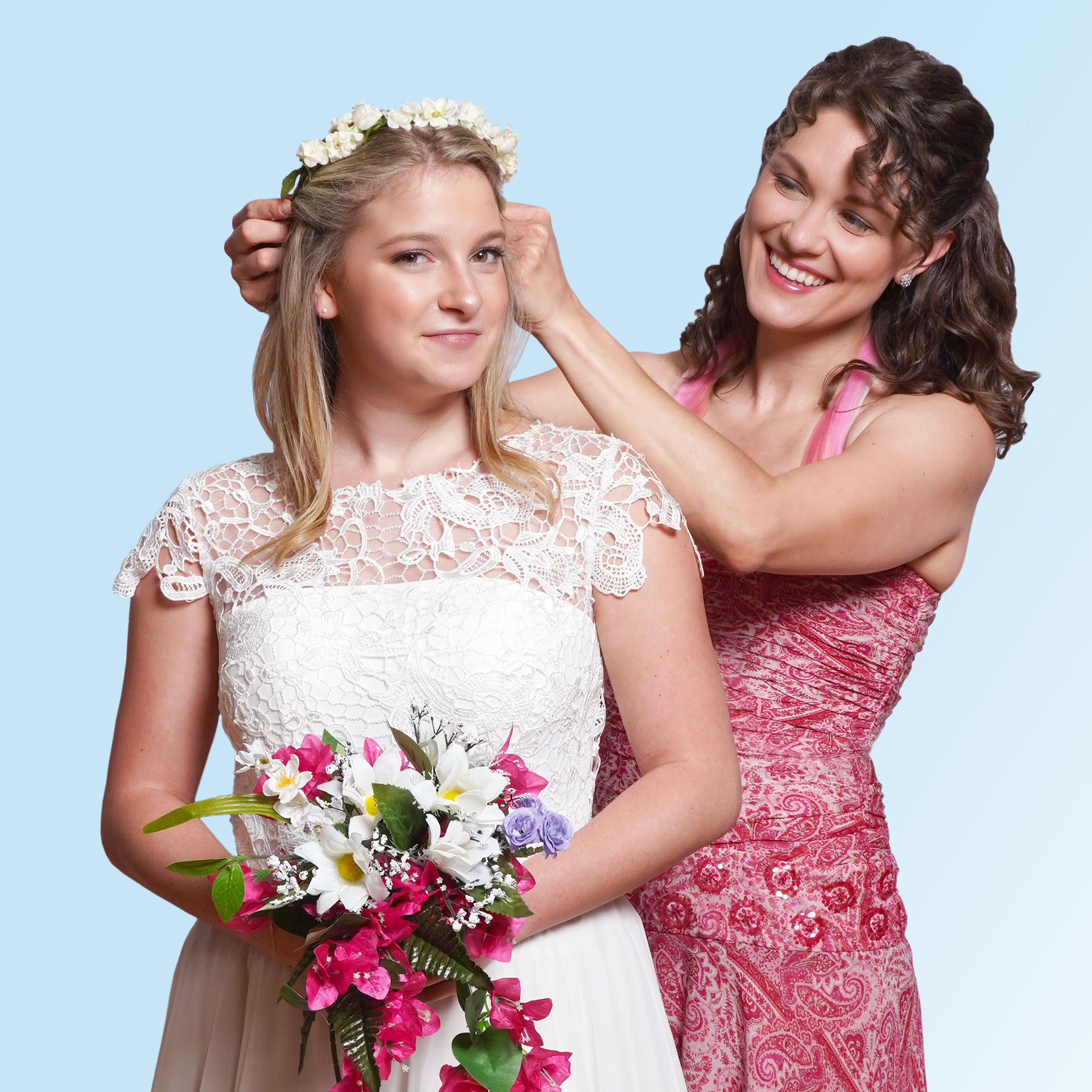 Emelie Faith Thompson was just a little girl when she started loving the music of ABBA. Now, she is playing the title character of Donna in Virginia Rep’s current production of Mamma Mia!

“My mother used to play ABBA’s music on road trips,” says Thompson who is returning to Virginia Rep after previously appearing in The Curious Incident of the Dog in the Night-Time. “I jumped at the chance to help tell this story.”

Mamma Mia! features the hit songs of the 1970s group ABBA. The story revolves around Sophie, a bride-to-be who plots to discover the true identity of her father by inviting three of her mother’s former suitors to her wedding. When Donna, former lead singer of Donna and the Dynamos, discovers what her daughter is up to, the antics crank up.

Getting to Know Donna

Thompson believes she and Donna are quite similar. “We’re both moms and practical about what needs to be done, but we like to have a good time, too,” she says. “Donna is hardworking, brave, and fun.”

Thompson brings that experience of being a mom to her role. Becoming a parent, changed “every part of my life, including my acting work, and really has informed how I approach this role,” she says.

Now a resident of the Washington, D.C. area, Thompson has lived and worked in New York and California, performing in Off-Broadway and regional roles.

“I’m originally from Culpeper and it feels very full circle to be back in Virginia,” she says, adding she first became interested in performing by participating in church plays in elementary school. “I decided by the time I was twelve  that this was the career for me.”

One of her biggest challenges in Mamma Mia! is the sheer number of songs she has to perform. “It’s vocally demanding, she says. “The biggest challenge for me is probably remembering to take gentle care of my voice. It’s a marathon, not a sprint.”

It’s difficult for her to choose her favorite song, but she does love to sing Slipping Through My Fingers while “Donna helps Sophie prepare for her wedding,” Thompson says.

Even though the show is lighthearted, it does have substance, she adds. “This is a show about the power and resilience of women, and it just happens to also be a really good time. We could all use more joy these days.”

She’s glad to be back at Virginia Rep. “It is one of the warmest companies I’ve had the pleasure of working for,” Thompson says. “This is only my second show with them, but coming back felt like home. I’m so grateful to be here.”

A Closer Look at Sophie

Hannah Jennison who plays Sophie is also returning to the Virginia Rep stage, previously appearing in Beauty and the Beast and Gypsy.

“I grew up at this theatre. I remember my first Fairy Tale Ball at age three,” says Jennison, a rising junior at Texas Christian University. “My parents were very involved in Theatre IV and Virginia Rep my entire life. It is a dream come true to be playing a dream role of mine on the same stage I watched so many amazing performances growing up.”

Acting comes naturally to her. She has been performing for as long as she can remember. “Two of my older sisters also work in the theater world, and I grew up watching them,” says Jennison, a Richmond native.

Playing Sophie has been a dream of Jennison’s for as long “as I can remember,” she says. “Plus, the show itself is so much fun. I’ve always loved the music so when I got the chance to play Sophie in my hometown, I jumped at it.”

She describes Sophie as a “bit of a hot mess, but the audience can’t help but root for her,” she says. “She’s spunky and marches to the beat of her own drum, which makes playing her a ton of fun.”

Like Sophie, Jennison’s impulsivity can sometimes lead to a mess that she needs help getting out of, she says. On the other hand, playing an only child with a single mother is very different from Jennison’s life.

“I am the youngest of seven children and have two parents who have been happily married for forty years,” she says, adding she believes she brings a lot of grit to the role of Sophie. “Sophie can sometimes be seen as a naive lovestruck young girl, but I think she is so much more than that. She has a lot of depth, and I hope I show that in my performance.”

She finds that it can be a challenge to play a role as iconic as Sophie.

“Everyone who knows Mamma Mia knows Sophie Sheridan and has a set view of what she is supposed to be,” Jennison says. “At first, I struggled to make Sophie my own and not copy the movie and Broadway versions, but after a while with the character I started to see her in my own unique light.”

Because the show is so lively, both Jennison and Thompson hope the audience goes home raving about how much fun they’ve had.

“I also hope this show reminds them of the people in their lives who mean the most to them,” says Thompson.