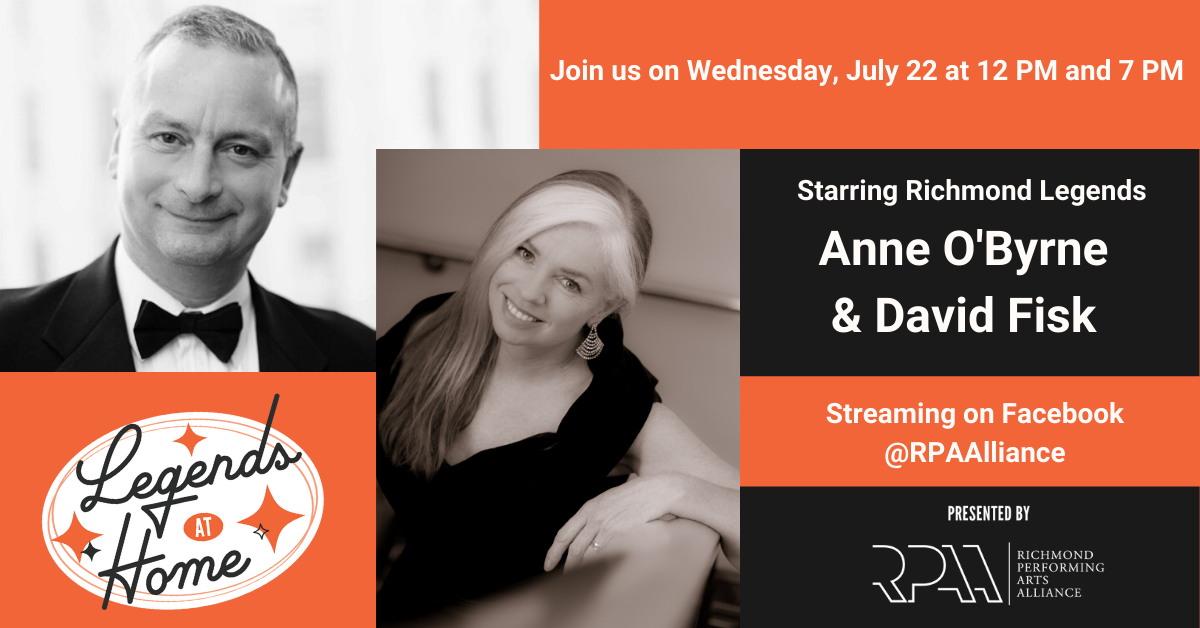 This performance will stream on Facebook at RPAAlliance and on the website here. You can also enjoy the entire lineup of Legends at Home performances.

Jason Marks responded with an emphatic Yes! when he was asked to perform an online concert for Richmond Performing Arts Alliance’s new Legends at Home! series.

“I thought since this was a cabaret series, I would give them a couch cabaret in my living room, which is the next best thing to a live cabaret,” he says. “I put on a tuxedo and sat on the couch and set up my phone to record. I edited it together on my laptop and did voiceovers.”

His goal was to bring “joy and levity into people’s homes during this bizarre, scary time we are all living in,” says Marks who is also serving as unofficial music director for the entire series. “If you do this at home, you have to accompany yourself, find tracks or sing acapella. I am serving as a consultant.”

Marks’ online concert in late March was the first concert in the at-home series. The idea for the series popped up after RPAA’s board president Jerry Sanford saw a Facebook concert by singer Susan Greenbaum. “He asked, ‘Is there any way we could take our Legends on Grace! cabaret series online?’” says Jacqueline O’Connor, RPAA’s programming and marketing coordinator.

The Grace series started as a way to bring in and showcase local talent. Even though the upcoming live shows in the series were postponed, RPAA felt like the online cabaret concerts would keep the music going during the COVID-19 outbreak.

“Jerry’s question started this ball rolling,” O’Connor says. “We went to all of our regulars and asked what they thought and they were excited. The artists wanted a creative outlet. So we said there are no rules except just have fun.”

The online series is also an opportunity to showcase artists who have not been featured inthe Grace series, which only presents three to four shows a year. “Engaging with these artists is exciting,” O’Connor says. “We will have ten artists in Legends at Home.”

Debra Wagoner, who was scheduled for a May 9 show in the Grace series, presented her online concert on April 8. “I was really pleased when they called and asked me to do it. I have already recorded it,” she says.

She and her husband, actor Joe Pabst, had fun making the video. “We set up a studio in our living room and put a mini-tripod on an ironing board,” she says. “You will hear my dogs and you will see my cats. It is very cozy.”

Making the tape gave the couple a “little shot of adrenaline,” Wagoner says. “We had such a good time making it. It was great to have something creative to do. That is how we are both oriented.”

Shows are streamed Monday, Wednesday and Friday at noon and seven in the evening on Facebook at Richmond Performing Arts Alliance and RPAA’s website HERE.

“Currently we have enough artists to cover us through April 20,” Says O’Connor. “We are hoping to add on to the series. We are also going to start archiving these and have them on the website.”

Artists in the series are paid a stipend. “We need some benefactors to step up for another $5,000, which could get us another ten artists and that would be great,” O’Connor says.

To support the “Performing Artist Support Program,”  an online and mail-in fundraising campaign that will support RPAA and the artists hired for Legends at Home, please MAKE A DONATION.