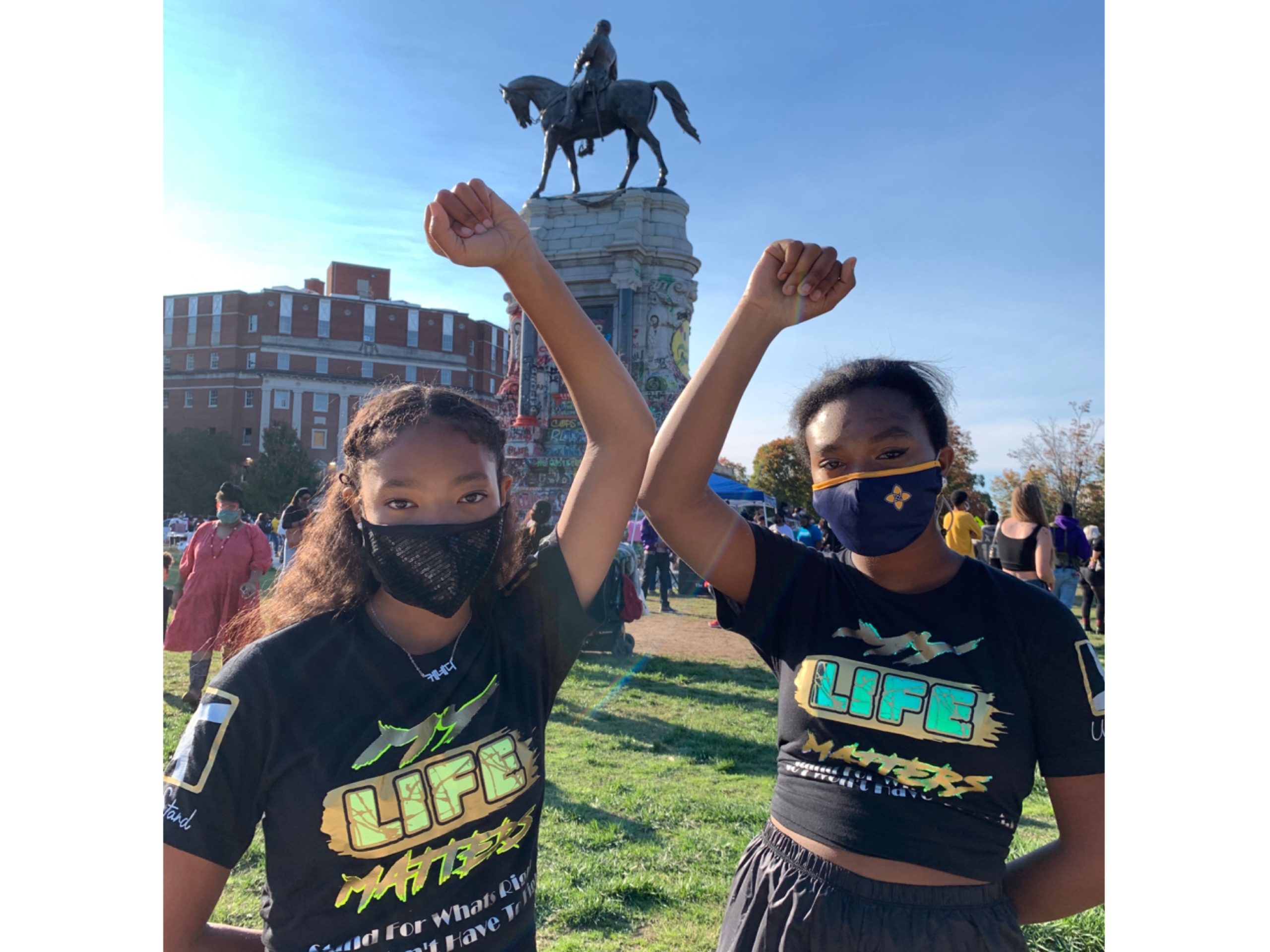 Kennedy George and her mom didn’t think twice about going to take photos of Kennedy dancing in front of the Lee Monument. They take dance photos in lots of different locations, everywhere from the Statute of Liberty to The Parthenon in Tennessee.

They went to the Lee Monument early in the day last June before crowds started to roll in. Photos taken that morning were unique because they were being taken during a time when the eyes of the world were focused on the Lee Monument and the social injustice protests taking place.

“To me when I saw Black Lives Matter protestors, it was hard for me to process it all. I had to let it resonate. I knew I wanted to incorporate dance and contribute to the movement,” Kennedy says.

One of Kennedy’s fellow dancers, Ava Holloway, also came to the monument early with the same idea of taking solo photos before joining fellow dancers Sophia Chambliss and Shania Gordon for a group photo later that day.

What Kennedy and Ava didn’t know was that photos taken of the two ballerinas that morning by both Richmond photographer Marcus Ingram and Virginia photojournalist Julia Rendleman, who sent her photos of them to the news organization Reuters, would shine a worldwide spotlight on them.

“The photos went viral immediately. It just blew up,” says Kennedy’s mom, Chris, who took photos of all four ballerinas later that day. “Those photos circulated too, but not the way the original photos did.”

Holloway had seen the protests that were going on “but I didn’t know what I could do to get involved,” she says. “The Governor announced the statues were coming down. It was important to capture a historical moment doing what we love to do.”

The photos led to a slew of media requests from outlets such as Inside Edition and the Today Show.

Seeing the interest in the photos and knowing the importance of the photos at that time gave Kennedy, Ava, Sophia, and Shania the confidence to found Brown Ballerinas for Change last July to use ballet to promote activism, social justice, and increase diversity in the arts. The organization provides annual scholarships, community programs and an ambassador program to help young dancers.

“We wanted to do something positive with all the attention,” Kennedy says. “We wanted to make it a movement not just a moment. We wanted to give back to the community so people can have opportunities.”

Meeting and Dancing Together

All four dancers met at Central Virginia Dance Academy. Ava, who started dancing at the age of three, met Kennedy at the dance academy several years before meeting Sophia and Shania there.

Ava started dancing after watching her older brother dance. “I got serious about dance around the age of ten,” says 14-year-old Ava, who goes to St. Catherine’s School. “I do all types of dance. My favorites are contemporary and hip hop. I also enjoy ballet.”

She loves dance because it provides a way “to express yourself and be your best self when you are dancing,” she says. “And you are dancing with the people you love.”

Kennedy, fifteen, who attends the Center for the Arts at Henrico High School, has studied all types of dance and loves performing jazz and ballet — she would love to dance professionally in the future, she says. She has participated in summer intensive dance programs with dancer and choreographer Debbie Allen, Dance Theatre of Harlem, Richmond Ballet, the Commercial Dance Intensive and Joffrey Ballet. She also does intensive workshops and auditions every summer.

Dance helps her in all parts of her life, she says. “I think it’s just the hard work you put into it. It’s not just what you learn in the studio, but it’s how you can apply it in life, being a better version of yourself. It’s a mindset. It allows you to be you.”

Dance is rewarding for 17-year-old Sophia. “You can constantly get better,” she says. “Dance reflects on the rest of my life. In school I can focus better on details than some people because that is what we have to do at dance.”

When the four ballerinas talked about taking photos at the Lee Monument she says she didn’t think much about it.

“It was just dancers taking pictures and dancers are performers,” says Sophia a senior at Atlee High School in the International Baccalaureate program. “I had already been involved in some of the protests. I was already using my voice. But, after people started recognizing us, I thought differently. I thought it was cool that we got to do something a little different than anyone had seen in the area.”

Posing in front of the monument was empowering for 15-year-old Shania, who attends the Center for the Arts at Henrico High School. “I knew what Black Lives Matter means and I knew about police brutality. I know what is right and I am fighting for that reason. I didn’t know [taking the photo] would have the result it did,” she says.

Even though she loves to dance, dancing can be difficult for Shania who has sickle cell anemia — her father also has the disease and her mother has sickle cell trait. Shania was chosen in 2018 to be an ASK Kourageous Kid representing the sickle cell community.

“Dancing makes it hard to breathe,” she says. “It’s hard to be in a mask and do a whole performance. Sickle cell causes issues with my legs, back, and arms, which makes it hard to dance but I still do it because dance makes me really happy.”

One of the reasons the teens decided to start Brown Ballerinas for Change was to create lasting change, says Kennedy. “We want to promote diversity with dancers. We want to speak out in schools to educate others to use their voice, to be reflective and have an open mind, be the change you want to see in the world and be a part of something bigger than yourself.”

The organization has two annual $500 Brown Ballerinas for Change Changemaker Scholarships that are awarded to two graduating high school seniors to assist with tuition and housing. The scholarship is open to students who live in the Richmond metropolitan area.

In addition, the organization has the BBFC Changemakers Program where young dancers serve as ambassadors for the BBFC and are seen as leaders. BBFC also has a clothes closet where people can donate new and gently used supplies — costumes, leotards, etc. — for dancers.

In the past, companies have not manufactured ballet accessories that match the skin tone of brown ballerinas. But now those items are being produced and sold.

“Ballet has been seen as a white art form,” says Ava who sees the organization as a way to help break stereotypes. “Some countries had never seen a brown ballerina [before our photos]. It’s super cool to be someone’s first of seeing something.”