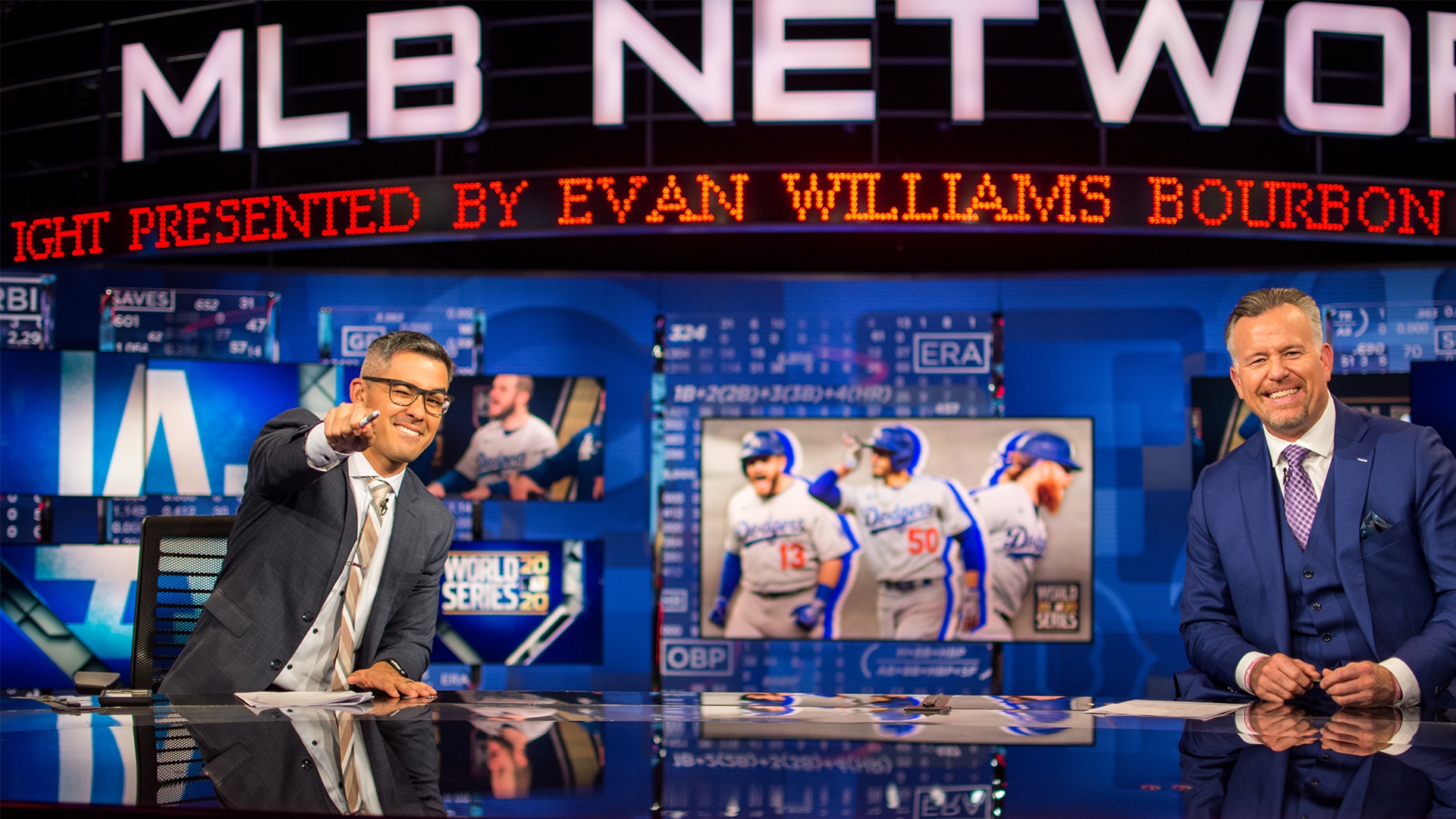 Sean Casey on Broadcasting the Game He Loves 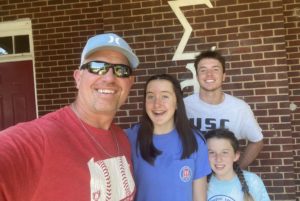 Anyone close to Major League Baseball knows the sport has ups and downs from season to season, but this year felt very different for fans, teams, and broadcasters.

Sean Casey, broadcaster and commentator for the MLB Network (above right), was attending spring training in Arizona when the league shut everything down in early March because of the pandemic. Baseball didn’t get underway again until July.

“I went back to the studio as soon as baseball started up,” says Casey, a University of Richmond graduate who was tapped for the school’s Athletics Hall of Fame.

Casey covered the season as well as the World Series from the MLB Network studio in New Jersey. “This year has been so different. The first couple of times I drove from Pittsburgh. Usually I fly,” says Casey who lives in Pittsburgh.

At the studio, he has to complete a COVID questionnaire and everyone has to practice social distancing and wear masks, except when they are on air.

Casey understands what players go through. The former first baseman played for the Cleveland Indians, Cincinnati Reds, Pittsburgh Pirates, Detroit Tigers, and the Boston Red Sox before retiring from the game.

“It’s a crazy lifestyle,” he says of the game. “When you are playing, there is a lot more stress because you have to perform a skill in a competitive setting. You have to stay in shape and work on the mental part of the game. There’s also the grind of travel and injuries. It can be taxing mentally.”

A single dad with four kids ages ten to nineteen – Jillian, 10; Carli, 14; Jake, 17; and Andrew, 19 – Casey found that broadcasting was a natural fit after his baseball career. “I love to talk and there’s not as much pressure. I feel like I have a master’s degree in baseball,” he says, adding he loves explaining the game and sharing his knowledge.

He feels the pandemic has brought teams closer together. “They had to step up for each other and their families. It forced everyone to figure out new ways to do things. There was more acceptance,” he says. “Sometimes you have to do things you don’t want to do, but you have to do them because it’s the right thing to do.”

Casey believes Major League Baseball has done a great job managing the pandemic, he adds. “The first couple of weeks with some cases, I think they did a good job of figuring it out.”

The team was only allowed to stay in the hotel and go to the ballpark. “They weren’t allowed to leave,” he says. “The playoffs were in the bubble. It was tough for people because they had to give up seeing their families.”

Not having fans in the stands was a negative for teams. “I think certain guys play to the fans, and they need that environment. I do think it affected certain people’s play,” he says.

Tyler Wilson’s dream of playing baseball has taken him from the Baltimore Orioles organization to South Korea. 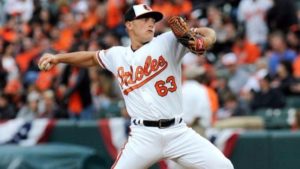 “In 2018, after seven seasons in the Orioles organization, I elected to transition to Korea.  As tremendous of an experience as my time in Baltimore was, I was ready for something new,” says Wilson who graduated from Midlothian High School and the University of Virginia.  “A change of scenery and clean slate were exactly what was best for my career at that moment in time. For years I desired to make the jump to play in Asia for the experience professionally but also personally.”

The day he signed to play for the LG Twins, he and his wife, Chelsea, found out they were pregnant. “The day before I left for spring training, we found out we were having twins,” he says, adding his sons are now two and the couple is expecting a daughter.

He and his family have loved their time in Korea “but it doesn’t come without its challenges – namely being on the other side of the world away from the rest of our family with two young boys,” he says.

Baseball is a huge sport in Korea, but a “much different experience than watching MLB games,” says Wilson, a right-handed pitcher. “The KBO is highly interactive with cheerleaders, individual player songs, and loud speakers blasting throughout the game. From the first pitch to the last one, the fans are all in.” 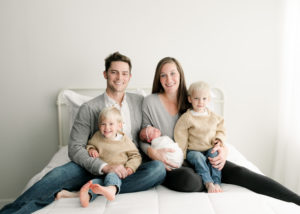 The pandemic has greatly affected the baseball season, just as it has in the U.S. “We started over a month late, didn’t have an all-star break and were forced to quarantine for two weeks prior to the season starting after I arrived back from a return to the U.S.,” he says. “Physically, I never recovered from the challenging preseason and fluctuating routines. Beyond that, for the first five months of the season we didn’t have fans. Towards the end, they slowly started integrating fans back in a limited capacity.”

He feels Korea has done a tremendous job containing the virus with “well under one hundred daily cases for a long time – some days even single digit positive tests have been reported,” he says.

Living with the pandemic in a different country has been unique, he adds. “I try to keep up with the situation and check in [with loved ones at home], but it is difficult to filter through the news and reports for objectivity. It is hard to be away from family when we truly don’t know when or how something could happen at any moment. Having been gone since January, it will be interesting to evaluate the differences when I finally do return home.”

Mark Budzinski: The Blue Jays Get an A+ for COVID Management

As first base coach for the Toronto Blue Jays, Mark Budzinski usually spends the baseball season in Toronto. This year the team played in Buffalo because the Canadian government  wouldn’t allow them to play in Canada. 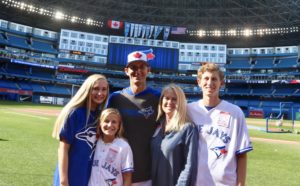 “It worked out great,” says Budzinski, a University of Richmond grad who lives in Richmond during the off season, working in real estate.

The Blue Jays took the pandemic seriously and “stayed healthy,” he says. “We didn’t have anyone infected. There was testing every other day, and we would wear masks everywhere except on the field. Our meals were prepared by our chef and were individually wrapped so we could get the nutrition we needed. He sent them to our hotel.”

Budzinski has been involved in baseball since he was five years old. “It was my dream as a kid to play in college and if that went well, go professional,” he says.

He has played in both minor and major league baseball before retiring from the game in 2005 and turning his attention to real estate. But, he missed the game and in 2013 had the opportunity to manage in the minor leagues, which he did until he started with the Blue Jays. Next year will be his third season with the team. 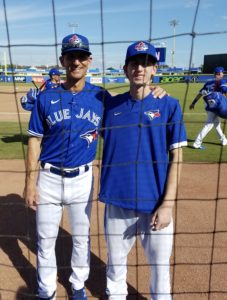 “I like all parts of baseball,” he says. “I always wanted to play but at some point the body doesn’t hold up any more. I enjoy working with young players and passing along things to them. I like helping them be the best they can be with at the goal of winning championships. We are very excited about our future.”

Traveling during a normal season can be rigorous. “From a family aspect that is the most difficult part of the job,” he says. “You have to have a great support system at home. My wife, Monica, makes it easy for me to do the job. I’m very thankful for that.”

He enjoys traveling when it’s with his wife and their three kids Josh, 18; Julia, 16 and Lily, 13. “We will pick somewhere once a year that they can go and where they want to go,” he says.