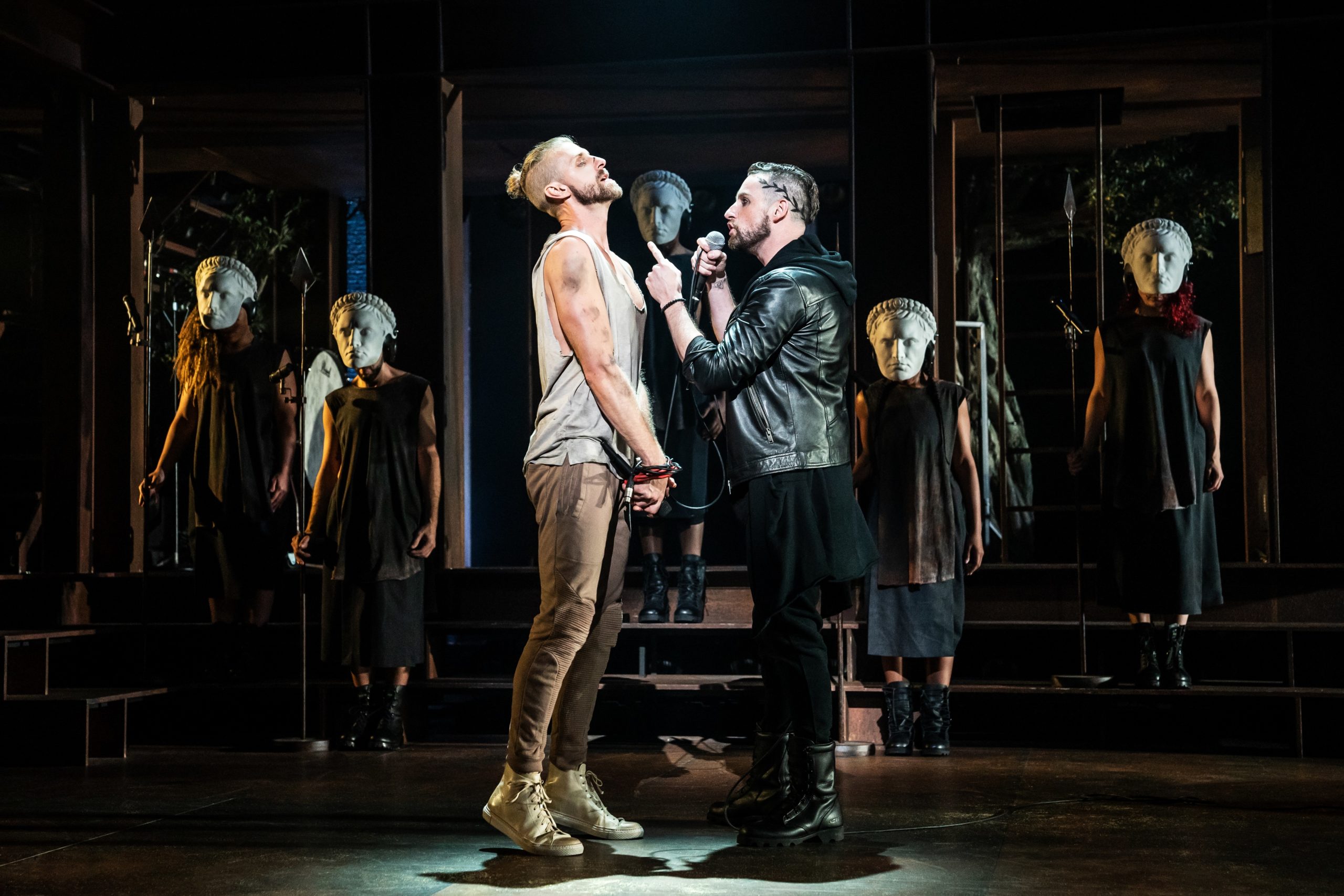 Actor Tommy Sherlock and his wife Corinne owe their meeting to rock and roll. Sherlock was performing with his band Tenors of Rock at Harrah’s Casino in Las Vegas. Corinne and her mother were on vacation and randomly decided to come to the show.

Sherlock saw Corinne in the front row and gestured to her, hoping she would stick around after the show and for a drink. She did.

“We went out for a drink and a year later, we were married,” says Sherlock, who plays Pontius Pilate in the rock musical Jesus Christ Superstar, playing Altria Theater from June 21 to June 26.

Corinne was surprised by the invitation. “I was shocked,” she says. “I completely fell head over heels almost instantly. I went back and forth from Texas to Las Vegas pretty much every month there on out.”

Sherlock wanted to be respectful because “She was with her mum,” he says of their meeting. “But, I was completely smitten.”

Sherlock, because of his previous theatrical roles and musical endeavors, was the perfect fit for the role of Pontius Pilate.

“I started acting when I was about twelve and then fell in love with dancing and singing as well,” says Sherlock who completed a three-year intensive musical theater course at a college in Liverpool, his hometown. “Liverpool is not your typical place to start in theater. Most people think of London.”

He started performing professionally after seeing an ad for the world tour of Mamma Mia. “I jumped on a bus to Scotland to audition and ended up booking the job,” he says.

In addition to this theatrical work, Sherlock started playing in Tenors of Rock in England.

“We were pretty successful. We were on an Asian tour aboard cruise ships and the Caesars Entertainment director saw us and offered us a job in Las Vegas. We moved to America in 2017,” he says.

Sherlock’s stint in Las Vegas was lucky in more than one way. One night, the casting director for Jesus Christ Superstar saw his act and invited him to audition in New York. “Lucky for me, I got the job,” he says.

He has always loved the musical. “It was one of my first introductions to musical theater,” he says. “I always wanted to do it.”

The show is in its fiftieth anniversary tour and this production pays tribute to the historic 1971 Billboard Album of the Year while creating a modern, theatrical world that is uniquely fresh and inspiring.

Featuring award-winning music by Andrew Lloyd Webber and lyrics by Tim Rice, Jesus Christ Superstar is set against the backdrop of an extraordinary series of events during the final weeks in the life of Jesus Christ as seen through the eyes of Judas. Reflecting the rock roots that defined a generation, the legendary score includes “I Don’t Know How to Love Him,” “Gethsemane,” and “Superstar.”

Sherlock, who started with the show in September 2019, sees his character of Pontius Pilate, the governor of Judea, as very conflicted. Pilate has a dream of meeting a man from Galilea and being blamed for the man’s death.

“He’s under a lot of pressure to get rid of Jesus Christ, who is adored by millions,” Sherlock says. “He realizes this is the guy from the dream. He’s an anti-hero, but you do feel a little sorry for him.”

“We have a great line of merchandise,” Corrine says. “I love that I get to interact with all the patrons. Everyone is so excited to see the show. So many patrons who had seen the original show fifty years ago come back to see it.”

She watches the show as often as she can. “It never gets boring. It’s an incredible show. There’s so much talent on the stage. I’m lucky to get to see my husband on stage. He’s so awesome,” she says.

The show is a classic, Sherlock says. “It’s a rock and roll kind of show and I get to wear an awesome leather jacket. I look badass in it.”

He and Corinne have started the tradition of collecting refrigerator magnets from every place they visit along the tour route.