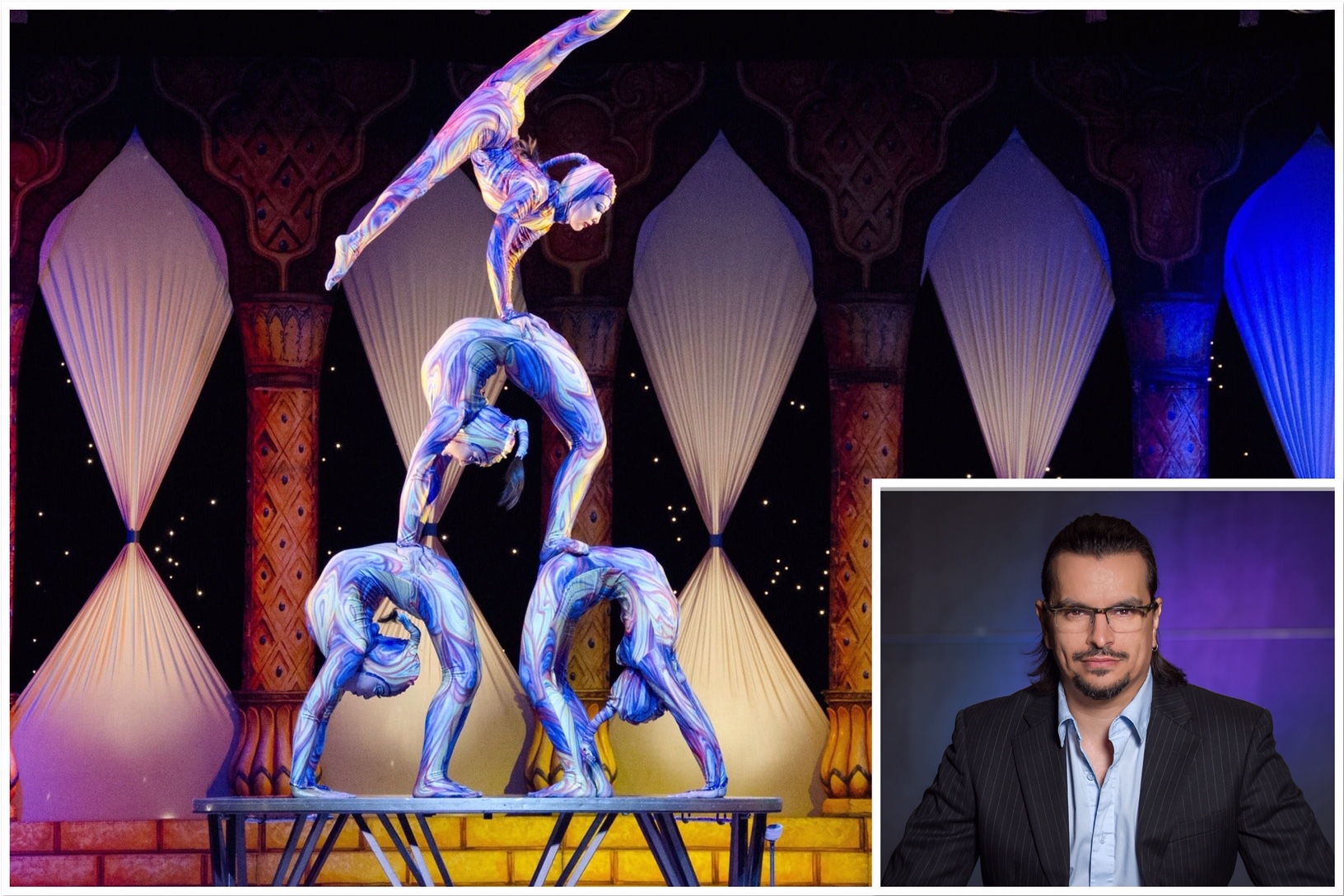 Fernando Quevedo was young and naïve when he pitched a family show to promoters in Las Vegas, a haven for adult entertainment. Quevedo, who grew up in Las Vegas in a family of circus entertainers, wanted to create a show that would entertain families. His father, a gaucho performer, made the offhanded comment that the only thing worse than pitching a family show was pitching a Christmas show in Vegas.

“I thought to myself, That might work,” says Quevedo. “I like Christmas. I want to do that.”

That was the seed that later grew into Holiday Dreams, A Spectacular Holiday Cirque! which plays Altria Theater December 27 at seven o’clock.

Born in Argentina, Quevedo spent his early years in Italy where his parents performed in the Orfei Circus before moving to Las Vegas to work. “I got to absorb quite a bit from that experience,” he says. “All of that had an impact on me for sure. It served as the groundwork to create the shows I do.”

Quevedo believed that families can come together and experience the magic of the holidays in a fun, exciting, and technologically advanced show. He wanted the show to appeal to a broad range of people, from a 5-year-old child to a grandparent. “I took inspiration from movies from Pixar such as Up,” he says, adding that kids love the different levels of the imaginary worlds in these films.

When Las Vegas snubbed Quevedo’s idea, he pitched it to the owner of the former Carousel Theater in Akron, Ohio, where it debuted and became a hit with audiences. “The owner was interested in doing something a little different for the holidays,” Quevedo says.

After seeing the show, the owner commented he wanted to look under the table to see if he still had socks on his feet. “He said, you just blew the socks off of me,” Quevedo recalls. “That was the spark.”

Holiday Dreams was built on a variety-based platform that allows for a change of pace, music, and performers every few minutes. “I am the first consumer of the show and my jaw dropped when I saw,” says Quevedo, the show’s creator, producer and director.

The show presents the holiday season in a modern way through holograms that make elements seem to appear and disappear from thin air, projection mapping as seen on shows like America’s Got Talent, and interactive lasers.

“I wanted to see how we could apply those elements so it wasn’t just flash and trash,” Quevedo says. “It took three to four years of honing it and making mistakes, going back to the drawing board and figuring things out.”

“Our acrobats are some of the best that have been in the Olympics,” says Quevedo. “We have aerialists that don’t use a safety net. We also have an incredible light bender that grabs light with her hands.”

To pay homage to Quevedo’s past, Malambo gauchos will be on hand to guard the toys in the show. “Some of our gauchos were in the America’s Got Talent troop,” says Quevedo who also performed in a gaucho act like his father.”

He wants to grow the show correctly and slowly, he says. “The goal was to bring it to theatre and not arenas, which are a little impersonal.”

Altria Theater is a great fit, he adds. “It has the height to do the aerial work and it’s safety-based. Our show appeals to a wide range of demographics, and Richmond has that. Plus, there is a little part of me that just wanted to be in Richmond.”

Quevedo hopes people will enjoy the experience the show provides. “One of the things we love to do is break down the fourth wall. We always bring people up on stage and they have a really good time,” he says. “It creates a symbiotic relationship between members of the show and the audience.”

For tickets for this all-ages holiday show on December 27, visit Altria Theater.

Go here and enter to win a 4-pack of tickets to Holiday Dreams, A Spectacular Holiday Cirque!