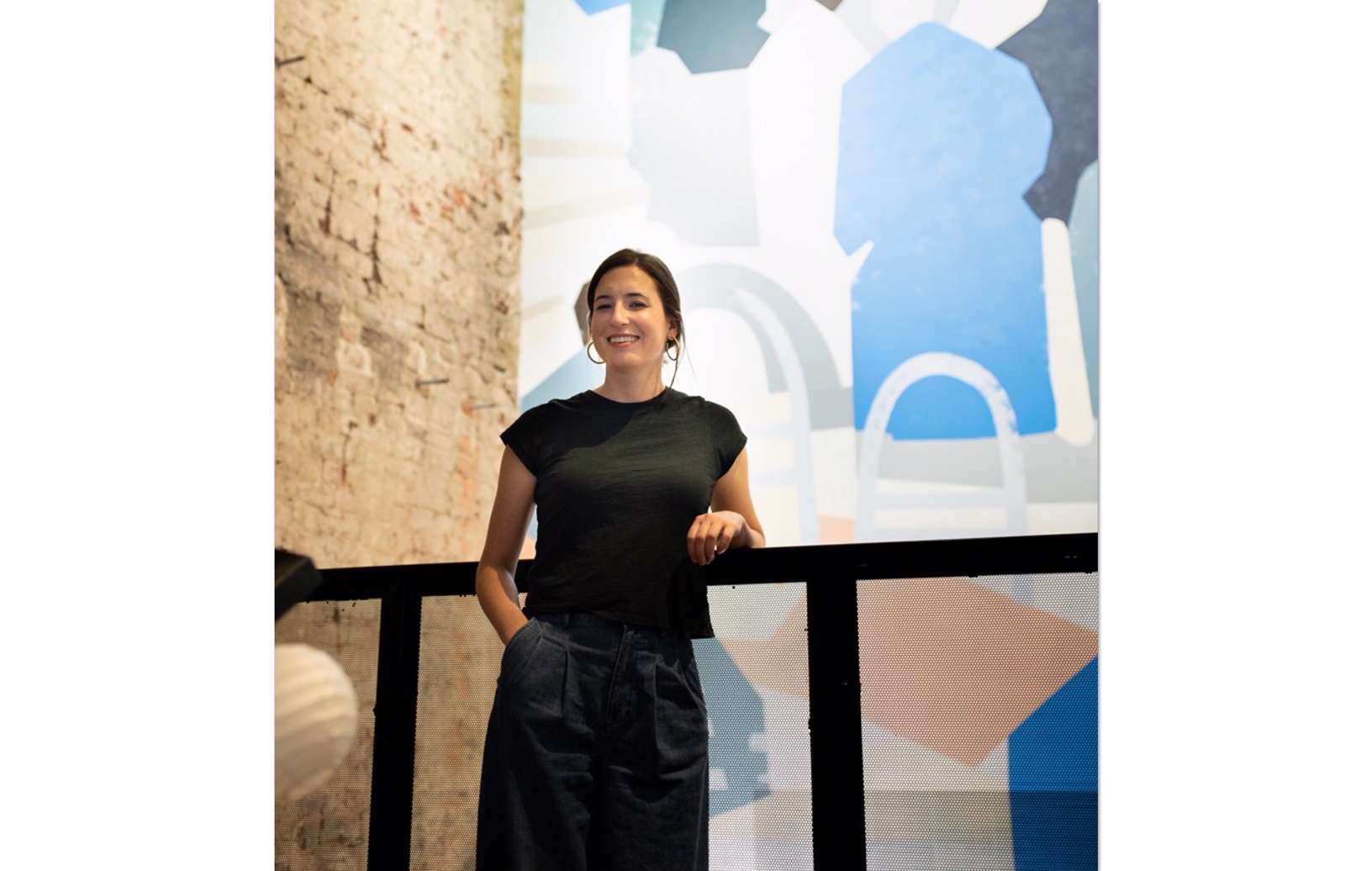 Emma Scarvey feels a sense of accomplishment every time she walks into Gather Arts District and sees the 45-foot-tall mural she painted for the co-working company.

“When I see it, I think ‘wow I did that,’” she says. “I also think I would like to do it again and use everything I learned.”

Primarily an oil painter, she usually handles smaller projects, but she has started working on a few larger scale murals. A Richmond native and VCU Arts graduate, Scarvey has been painting ever since her 2015 graduation.

When she was approached by Gather to submit a proposal for the new mural, she was intrigued with the idea of working on a project that would be nine feet wide and forty-five feet tall. She landed the job and started the process last July when the building was still a construction site.

Gather was interested in a mural reflecting Richmond’s history. “I loved the concept of a modern reference to Richmond history,” Scarvey says. “I started researching old photos of Miller & Rhoads and Thalhimers.”

Scarvey works with collage in some of her paintings and used that concept for the mural. She came up with an abstract version of collaged photos and made subtle references to familiar buildings as well as moments in history. For example, she included the legendary clock from Miller & Rhoads as well as women from the 1960s conducting a sit-in at a lunch counter in Thalhimers – the women were Virginia Union students known as The Richmond 34.

To paint the large mural, Scarvey had to climb a 45-foot ladder with buckets of paint in hand. “It was much more of a workout than I anticipated,” she says, adding she did all of her work on scaffolding. “I learned that I do have a fear of heights. I had to get over that irrational fear because I realized it wouldn’t be professional of me to quit. I gritted my teeth and got through it.”

The payoff for Scarvey: She has a new found confidence in heights.

As she painted, Scarvey had the image of the art on her phone and used a projector to project the image of the art at every level. “There was a lot of trial and error,” she says. “I worked from top to bottom. My biggest challenge was coming to terms with the size of the mural and that took me a while.”

She was still painting the mural when Gather opened and people were quick to give her feedback. “The feedback has been good,” she says. “People get excited when they hear about the history of the photographs.”

Each Gather office has a unique vibe reflecting the personality of the area where it is located, “and nowhere is this more evident than in the arts-centric corridor of downtown Richmond that’s home to Gather Arts District,” says James Crenshaw, an owner of Gather. “Emma’s colorful, history-infused mural creates a stunning interior backdrop for Gather’s members who enjoy this beautiful co-working environment and for guests who visit for a meeting or a tour. We all loved her concept for the mural and she executed it to perfection.”

Creating the mural was fun for Scarvey. “It’s great to work on something that big,” she says.