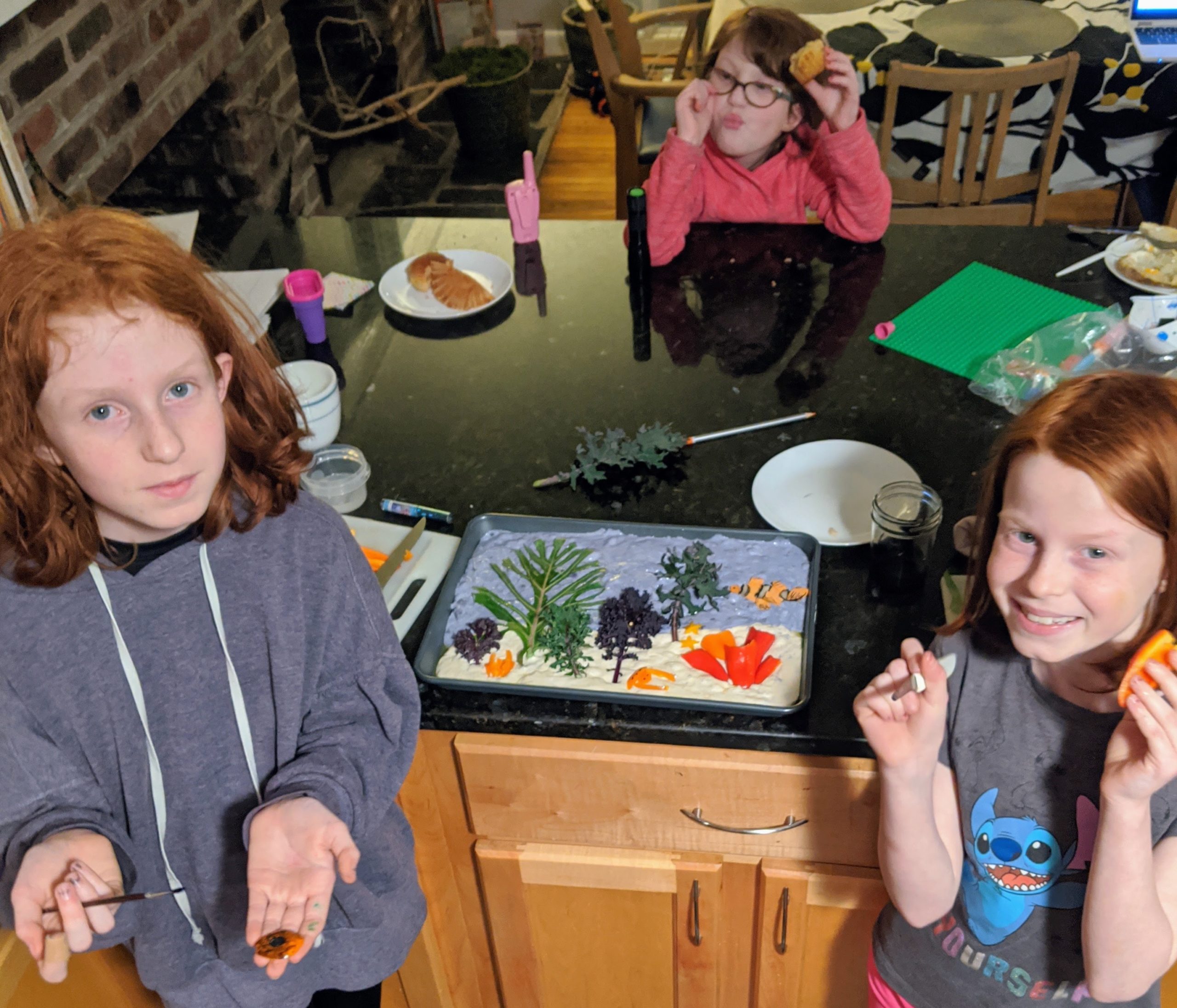 Tom Parfitt doesn’t need a canvas to create art. All this stay-at-home dad needs is his homemade focaccia and nature’s bounty.

“I have been baking bread for a decade,” says Parfitt, who has been involved in the food industry since the early 1990s. “I have been seriously working on sourdough focaccia for four years.”

Homemade sourdough starter is healthier and easier to digest than store bought yeast, he says. “It’s also sustainable. You don’t have to purchase commercial yeast, which doesn’t break down proteins like the bacteria in sourdough starter.”

He added in his artistic skills last summer in an attempt to get his four children (Clare, Eliza, Emily, and Jude; ages eleven to five) to try new vegetables from the garden. His first decorative focaccia had a garden theme.

“I wanted the kids to try things like asparagus, garlic, chives, peppers – vegetables that were growing in the garden,” he says. “How better to get them interested in eating them than to put them into a pretty painting.”

According to Parfitt, his kids loved it because it looked so pretty. 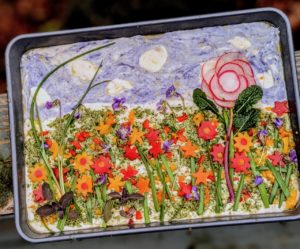 Parfitt, a graduate of the Maryland-based culinary school L’Academie De Cuisine,  first became interested in the food industry when he was in high school and worked in a restaurant, making salads and running the cash register. During his career, he has been a chef, owned his own catering business, Seven Hills Market, which closed in 2009, and worked as a pastry cook in a five-diamond restaurant in Washington, D.C. He also helped run the culinary arts school at University of Richmond where he had his own teaching kitchen.

He was working with sustainability programs at UR when he left in 2017 to become a stay-at-home dad. “My youngest daughter has global developmental delays so I left to care for her and take her to her therapies,” Parfitt says.

The Kitchen as a Classroom

Parfitt and his wife, Whitney, a recruiter at Capital One, try to teach their children how to do daily tasks their parents do at home. “I see everyday chores as teaching moments,” Parfitt says. “If kids learn and are part of making and growing food, they will eat more healthy food. Our kids know how to cook. We do it together.”

He has stepped up his efforts during the pandemic, getting his kids to help with breads – Parfitt makes a variety of breads – and dinners. “I always incorporate learning moments,” he says.

He creates lessons that cover a variety of classes such as math, learning about measurements, and density while cooking. He’s held full-blown focaccia baking classes as well.

“One time the kids made an underwater sea theme for the focaccia and used natural blue coloring from a flower,” he says. “Eliza made Easter egg focaccia bread and Clare made fairy hollow focaccia bread.”

Two of his oldest daughters cooked dinner and gave their parents a date night. They made a three-course meal that included hummus and vegetables, a salad and angel hair spaghetti with homemade red sauce. Dessert consisted of freshly made whipped cream with blueberries and edible flowers from the yard.

“It was really cute,” Parfitt says.

Parfitt is starting a business and retail restaurant called Wildcraft Focaccia Co. He was close to signing a lease for the restaurant when the pandemic hit. “That’s on pause now,” he says. “You can follow it on Instagram and Facebook.”

When it does open, the restaurant will serve mostly lunches but will also do special orders for decorative focaccia.

For Valentine’s Day, for example, he made a bouquet of roses out of tomatoes on top of the focaccia bread. The video went viral. “It’s now a trend to do these kinds of breads,” he says, adding he’s also done recreations of famous paintings such as Edvard Munch’s “The Scream” and Vincent van Gough’s “Starry Nights.”

Parfitt bakes three to four times a week and his kids can always join him in the kitchen. “Sometimes they do and sometimes they don’t,” he says. “My first and foremost job during the pandemic is to make them feel mentally well and create good memories.”