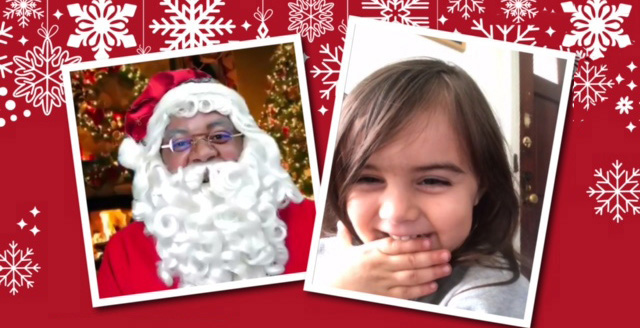 Santa’s visits to Virginia Repertory Theatre are winding down, but the jolly old man still wants to visit virtually with children and also have them and their families watch him act — a new skill he has acquired with the help of actor William Anderson — in the theatre’s current virtual production of Santa’s Enchanted Workshop.

Santa’s emphasis is always focused on putting the gifts that kids want under the tree. And even though he’s been doing virtual visits this year because of the pandemic, he hasn’t fielded any tougher than normal questions from kids. He has, however, had some unique requests.

“I was asked for a unicorn because I was the only one who could make that happen,” he says with a jolly laugh. “I told the little girl that she should have a unicorn anytime she wanted if she believed in using her imagination. It’s a gift that she can have forever if she closes her eyes and looks deep into her imagination. If she does that, she could see that unicorn anytime she wanted.”

Santa never knows what he will encounter when he’s talking to kids and that can make him a bit nervous, especially his elves are busy making toys. “After I sing for them and start talking to them, that feeling soon fades, and I become comfortable,” he says. “But I go through this with almost every child I see.”

To schedule your 5- to 7-minute virtual visit with Santa before December 23, go here. Santa has been relying on Anderson to help him get through his long list of wishes. Anderson, who works as an instructional assistant at Springfield Park Elementary, is happy to oblige.

Anderson is no stranger to the jitters of being in the spotlight. He finds it helpful to get in touch with his younger self, muster up the freedom to play make believe and to express himself in different ways.

One of his favorite things is helping Santa teach kids that Santa can look just like anyone else that you may see walking down the street here or at the North Pole.

“I never thought I would be Santa, and that was because I am Black,” says Santa. “I hope that this can be a door opening for another minority to be something or someone they thought they would never be because of the color of their skin.”

Anderson would love to see people let go of the idea that someone that “lives in our hearts and imaginations looks a certain color,” he says. “The idea of Santa is love, magic, imagination and so much more. You may see me look like this today, and the next time you see me, I will look like someone new, and that’s all because of the Christmas magic.”

When he sees children’s faces light up when they see him, it brings Santa “all the joy that I need,” he says.