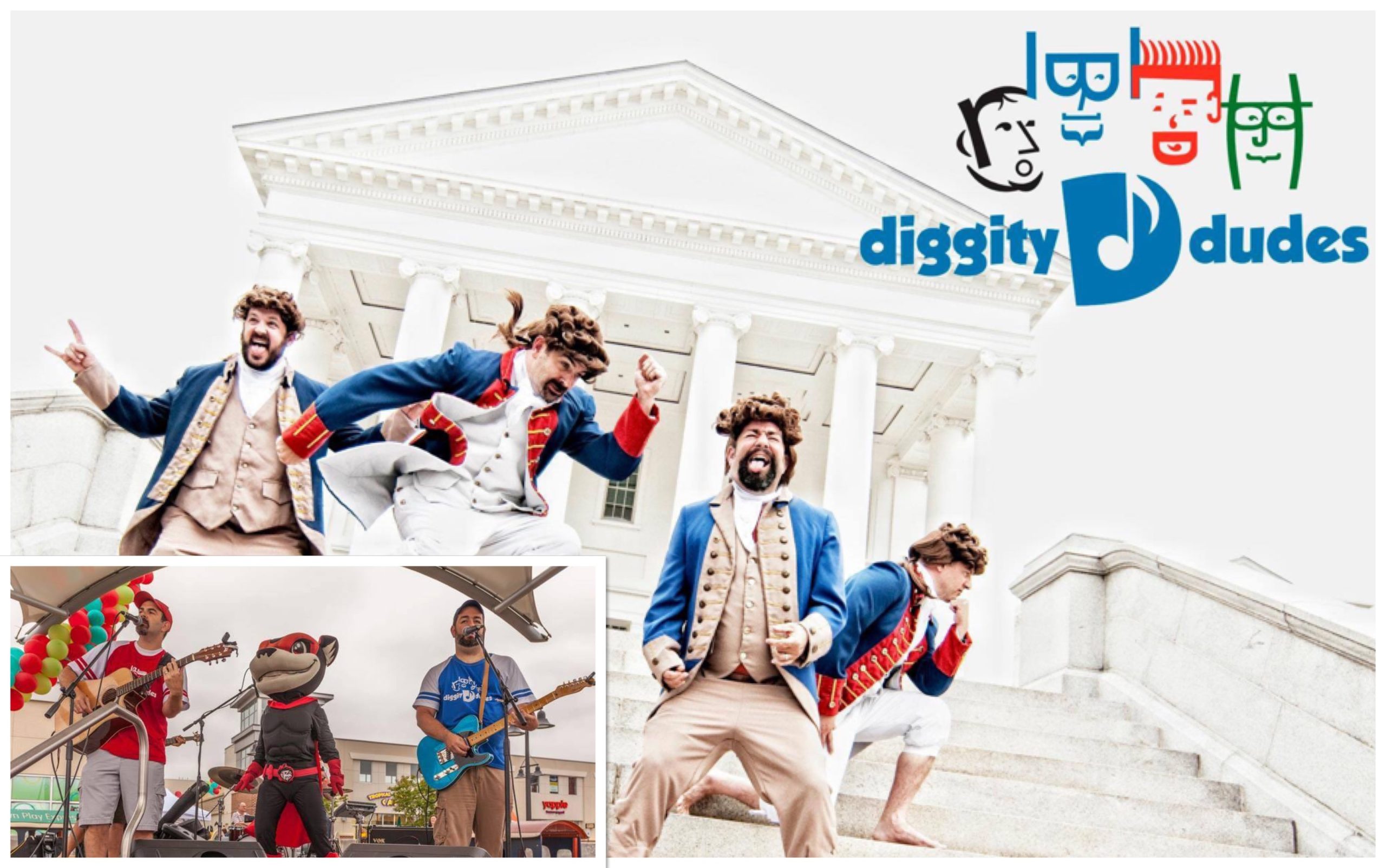 Donny Atkins is excited about re-introducing the Diggity Dudes to Richmond-area children during the band’s tenth anniversary. Atkins and his best friend, Mike Hartsfield, started the hip, kid-friendly band in 2009.

“We took our kids to see The Wiggles, and we were disappointed to see how condescending the kids music was,” says Atkins, dad of three. “We got together as a dare to ourselves and wrote about six songs in three hours.”

After deeming the songs good, they proceeded to make some rough recordings of the music. As time went on, they got involved in other things and “didn’t think about it anymore,” Atkins says.

A couple of months later, when the two were rehearsing with their rock band The Venture Rays, they decided to play the songs for their band mates who were enthusiastic and felt there was an audience for this type of music. Encouraged by their comments, Atkins and Hartsfield wrote four additional songs, formed the Diggity Dudes, and recorded their album.

The band – Atkins (guitar, mandolin and vocals), Hartsfield (guitar and vocals), Tod Ellsworth (bass), Mark Henderson (drums) and Nathan Brown (keyboards) – was a quick hit with several radio stations including Philadelphia’s WXPN, a University of Pennsylvania radio station that is syndicated across the country.

“Before we knew it, we were playing a hundred shows a year along the East Coast, from South Carolina to New York,” Atkins says, adding that the touring continued for four years.

The band plays hip music for “hip kids,” he adds. “Parents would say to us that they had no idea the music was kids’ music. Musically, the songs are complex and cross different genres. The lyrics are stories.”

At first the music was geared to early preschool audiences. “The second year, the songs got more complex as our kids got older. We tried to keep them engaged,” Atkins says.

In 2011, the Diggity Dudes started a family music festival, Diggity Fest, at Westchester Commons where they will be performing on Sunday, June 23, from 2 p.m. to 5 p.m. to celebrate a combination tenth anniversary with Westchester Commons (the site of the musical festival) and Richmond Family Magazine (the family lifestyle magazine and original media sponsor of the festival). “We had about five of those fests out there so it’s neat to be going back to Westchester,” Atkins says.

June 23 will be the first appearance of the band since 2015 when band members decided to concentrate on family instead of traveling from gig to gig. Four of the five members are dads and being at home for their kids “was important,” Atkins says.

Atkins started thinking about reuniting the band again when his 4-year-old son accidentally discovered the music of the Diggity Dudes and liked it. “I made a call to Mike and asked him if he would want to do this again,” Atkins says. “We found out there is still viable market out there for this. When we stopped playing, there was nothing like us in the Richmond market.”

The band will only play about four or five shows this year. “We have no intention of doing more,” Atkins says. “It’s nice to know we can play when we want. We want to be really selective.”

Band members – now all in their forties – are reenergized and excited about playing again. “We’ll be doing the same songs as before, but we have to relearn them,” Atkins says. “It’s all brand new to us again.”