Nathaniel Shaw was shocked the first time he saw Once on Broadway. “It was so unique. It’s a delicate piece with a rock-and-roll score,” says Shaw, Virginia’s Rep’s artistic director and director and choreographer of the theater’s upcoming production of Once. “I never saw anything in the canon of musical theater that was this poetic. Every lover of the theater should experience Once at least once in their life.”

Shaw previously served as resident choreographer for both the Broadway production and the first national tour of the show. He also traveled abroad to cast the first two international productions in South Korea and Australia.

At its heart, Once, which won eight Tony awards including Best Musical in 2012 and a 2013 Grammy Award for best musical theater album, is a story about “picking up your fellow man; meeting a stranger in a desperate time in their life and reaching out despite your own fears and insecurities to help that person and lift them up,” Shaw says.

The concept is couched within a boy-meets-girl story with a twist at the end. “The relationship and the music they put together changes this community,” Shaw says. “Everyone that comes in contact with that is healed or transformed in some way.”

Everyone in the production plays one to three instruments during the show, making casting a real challenge. “You have to be an accomplished musician on multiple instruments as well as a fantastic singer and an excellent actor,” Shaw says. “The actors also have to do choreography while playing their instruments.”

The cast assembled for the show is high caliber and Shaw couldn’t be happier. “Shows like Once ask you to look under each rock and stone for people. We reached out more to the musical community than we normally do,” Shaw says.

Ken Allen Neely plays the lead male and Katherine Fried is lead female. The two had previously played the roles together at the Arden Theatre in Philadelphia.

Michael Zygo, who was part of the original production as both dance captain and associate conductor, will play the role of Emcee and also serve as music director, associate choreographer and dance captain.

The show is in association with Fulton Theatre in Lancaster, Pennsylvanie, where Shaw has history. The actors will do the production in Richmond and also another run in Lancaster.

The show’s down-to-earth feel played a huge role in costume designer Ruth Hedberg’s choice of costumes. It called for the type of clothing someone “would get up and choose to wear … something specific to that person,” she says. “They all have to exist in the same world but they have to stand out as the individuals that are their characters.”

Hedberg put an emphasis on textiles and adding texture, dimension and cultural detail to the costumes. “Nathaniel and I talked through each character specifically,” she says.

Hedberg compiled a color palette along with images of Czechoslovakian and Irish folk textiles. She built a few costumes that had to be very specific and bought a large portion of clothing because “the show lives in a very current place,” she says. “Everything on stage is something that is believable. It could be worn today. It lives in a timeless place as well.”

Once, which runs February 8 through March 3 downtown at The November Theatre, is part of the annual Acts of Faith Festival. “The show is a great commandment of love your neighbor as yourself,” Shaw says. “The connection the guy and girl have is in no way lessened by her foreign heritage. The connection they form in making music together transcends any obstacles that exist.”

For tickets and showtimes, go here. 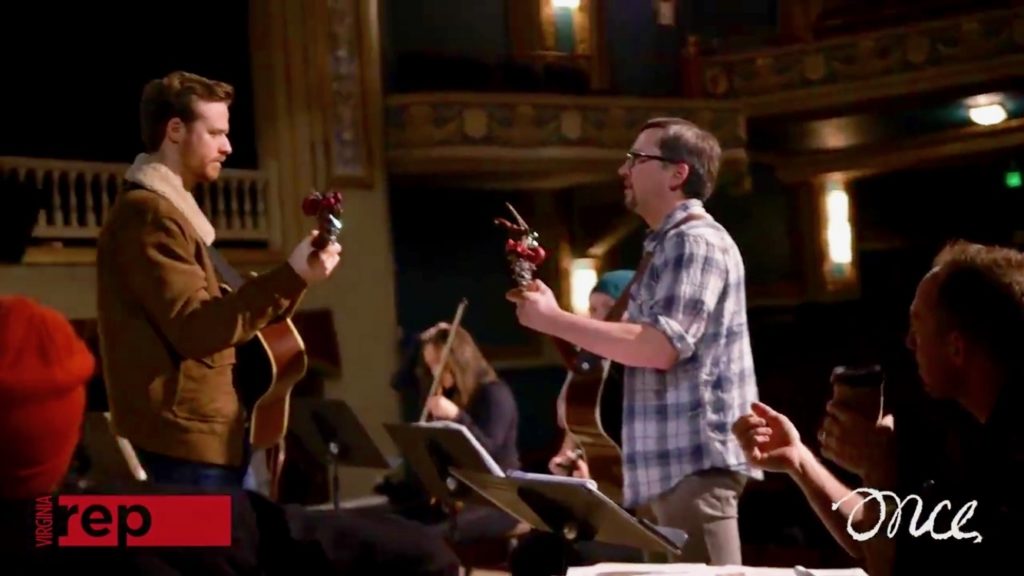