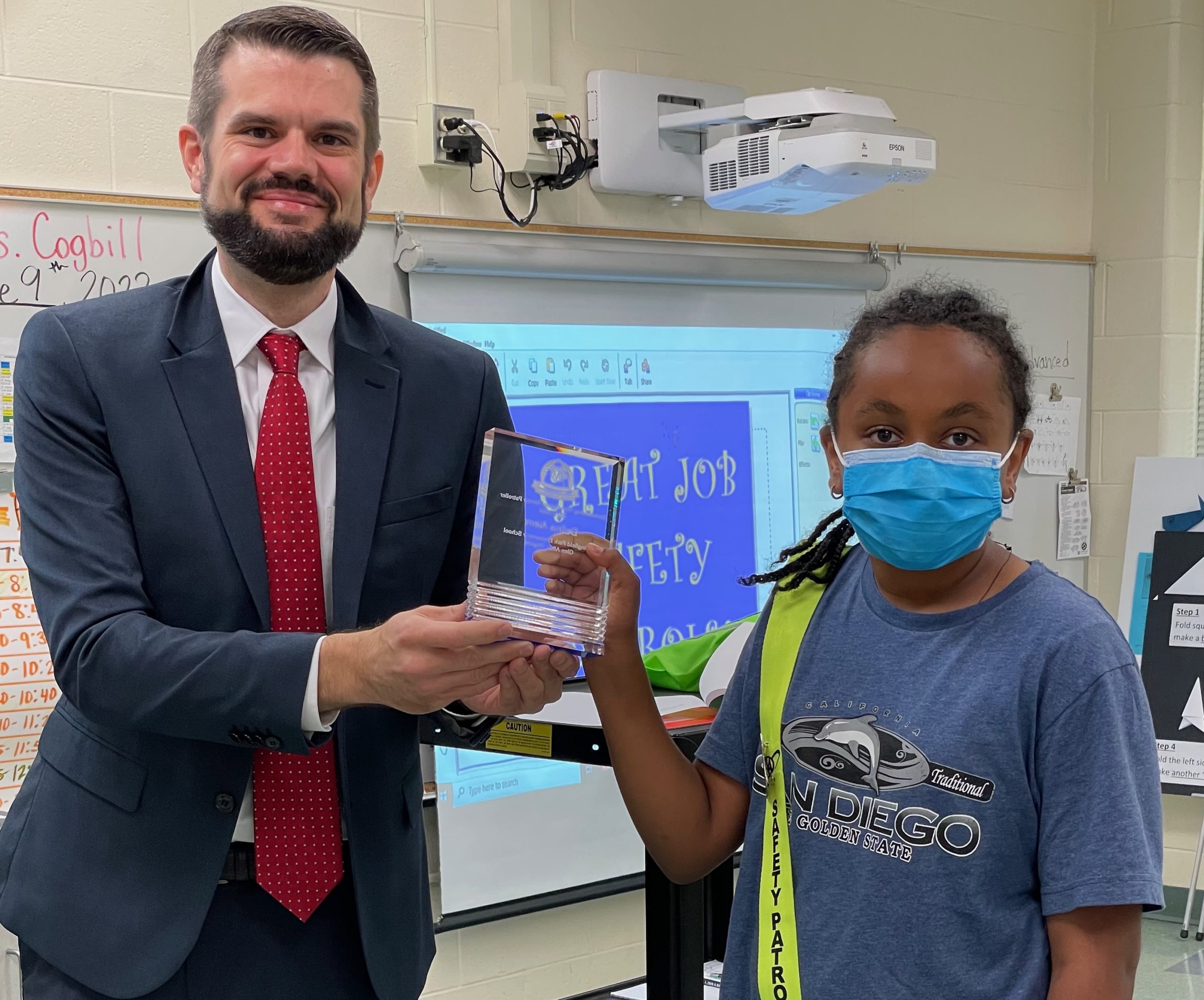 RICHMOND, VIRGINIA (JUNE 16, 2022) AAA is proud to announce that a Henrico County student has been named an Outstanding School Safety Patroller for the 2021-2022 school year. Delina Alem, a fifth grader at Springfield Park Elementary School, was surprised with the award last week at an end-of-year party for the patrol.

Delina’s art teacher describes her as calm, quiet, mindful and alert and as someone who always leads by example. The 5th grader was praised for her maturity and dependability and for taking her duties and her post seriously.  She was also willing to help out wherever needed, even when it was something outside of AAA school safety patrol duties.

Her desire to become a safety patrol member actually came from a negative experience she had as a younger student. She had a monitor on an afterschool care bus that was mean to her and to other children. That did not sit well with her. It motivated her to want to become a patroller when she got older to show kids how leading with kindness is the way to encourage safe practices and protect fellow classmates.

On top of being a top notch safety patroller, Delina is also a celebrated artist whose work has been selected to represent her school in numerous art shows over the past few years. She recently had some of her work displayed at the Henrico School’s Central Office as part of the Black History Month exhibit. When she grows up she wants to pursue a career in marine biology.

Delina was presented her award by Glenside AAA Retail Manager Drew Kinder during a surprise presentation in front of family and friends at a pizza party celebrating the patrol. AAA Mid-Atlantic congratulates her on the award and wishes her well as she heads off to middle school.

AAA is proud to announce that a Chesterfield County student has been named an Outstanding School Safety Patroller for the 2021-2022 school year. Judson Jones, a fifth grader at Winterpock Elementary School, was surprised with the award yesterday at an end-of-year party for the patrol. 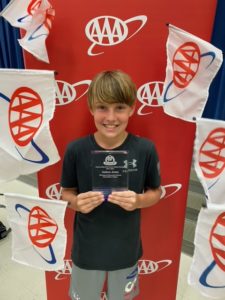 embers describe Judson as well-respected and dependable and for being committed to stepping in to remind fellow students of the school’s values of being safe, kind and responsible.

Along with leading by example, he was also praised for being dependable and trustworthy and for arriving at his post early to be prepaed for helping out his fellow students for the day.  Judson also stepped up and volunteered to take on the responsibility of removing the school flags at the end of the school day.

Outside of his hard work on the safety patrol, Judson’s teacher says he’s an exemplary student in the classroom too.   “His Integrity is evident and this is why he is a role model to his peers.”

Maybe it has something to do with wearing the belt and badge, Judson says he might want to be a police officer when he grows up.  Considering the leadership he’s shown as a AAA School Safety Patroller, we know he’ll be successful at whatever he decides to do in the future and we wish him well as he heads off to middle school in the fall.

Judson received the surprise honor yesterday in front of family and friends at a pizza party celebrating the patrol that was thrown AAA Mid-Atlantic.

“We are so happy to support these programs at schools across Virginia,” says AAA Mid-Atlantic spokesperson Morgan Dean. “We give these young people the training to help make their school safer and we’re always so impressed to see how innovative they can be when it comes to implementing changes and improvements at their schools.”

For more than 100 years, the AAA School Safety Patrol has been the world’s largest school-based safety program. Patrollers around the world provide school-aged children an extra sense of safety and security during the school day’s busiest times: arrival and dismissal. As a peer-to-peer leadership development program, Safety Patrols are trained to recognize safety hazards to create a safer school environment. The presence of a AAA School Safety Patroller wearing the familiar belt & badge is a nationally recognized symbol representing more than 679,000 children throughout the country who participate in the program each year.

The AAA model has been adopted in at least 30 other countries, including England, France, Germany, the Netherlands, and New Zealand.