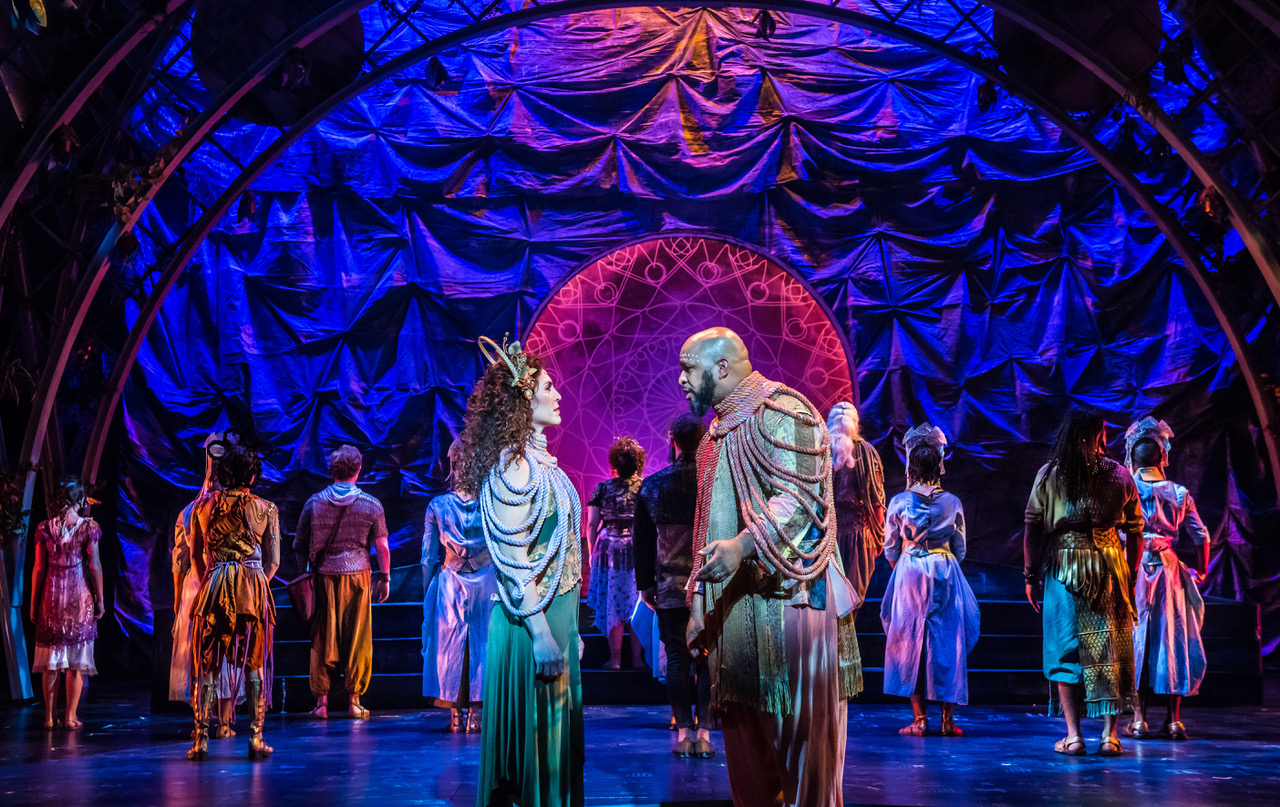 This weekend‘s opening of Atlantis at Virginia Rep was a rare treat – the chance to see a new musical that will likely end up on Broadway in the future. Or, at least that’s the dream of Australian composer and lyricist Matthew Lee Robinson who came up with the idea, created the music and lyrics, and was one of three of the show’s writers.

Atlantis takes us on a mythical journey to an island shrouded in mystery. Most of the islanders have been sheltered from the outside world, not knowing there was anything beyond the “seam” where the sky joins the ocean. The island is governed by The Order, comprised of the heads of each of the five clans – Earth, Water, Fire, Air, and Aether. The Order, as well as all Atlanteans, worship the goddess and great leader, Thera.

Everyone is content with the island and their way of life except young Maya, who is curious about what could be on the other side of the seam. Life on the island has a normal ebb and flow as it builds up to a celebration for Thera, until a stranger from the sea is found on the beach. His mere presence creates a fear that ends up changing the people of the island forever, a notion more culturally current than you may think.

Skillfully directed by Kristin Hanggi, best known for directing and developing Rock of Ages, Atlantis has a large, masterful cast that breathes life and energy into each character on stage. The quality of the work is so elevated that the lines between New York and local talent blur into a talented abstract. Everyone in the cast holds their own.

It would take much more room than allotted to single out the entire cast, mind you, they all deserve to be singled out. But for space, let me zero in on a few of the standouts.

Eighth grader Lucy Caudle, who plays Alexa, has a talent that far surpasses her age. Every note and comical cue was met with confidence and precision. She will be a force on the stage as she grows older.

Debra Wagoner who plays Alexa’s mom shows off not only her talented chops but also her comic skills. Fellow Richmonder Katrinah Carol Lewis, Alexa’s other mom, Cleo, brings a strong voice and honest emotion to her character.

Broadway actor Julian Decker plays Kaden one of the firstborn children who will join forces with Thera to protect the island. His solid performance is complemented by his dynamic vocals that especially shine in his solo Let’s Start a War.

Broadway actress Antoinette Comer really brings out Maya’s curiosity about the world. Her sincere portrayal is as compelling as her exquisite vocals, which fill every inch of the theater and pay a loving homage to Robinson’s brilliant lyrics.

The play’s scenic design by Drama Desk Award-winner Jason Sherwood soars into the heavens and is complemented and bathed in light by BJ Wilkinson’s mesmerizing talent. The costumes of costume designer Amy Clark, who has designed for Broadway, television, and worldwide arenas, bring Atlantis to life with intriguing style and texture.

Anyone attending the show would be wise to check the lineage chart in the back of the playbill in order to become acquainted with the characters before they set foot on stage. Without some knowledge, the beginning can be slightly confusing until you decipher how the characters relate to one another.

It’s easy to understand Robinson’s dream of Broadway. The music in Atlantis soars with emotion. Dynamic and moving, it’s comparable in essence to some Broadway blockbusters – think Wicked and Les Misèrables. Families with kids eight and up will appreciate the dynamic heroine, Maya, the songs with their combination Moana–Little Mermaid vibe, plus a wildly inventive set, costumes, and other-worldly hair and makeup.

It’s always a gamble whether a show will make it to Broadway, but I would bet one day this will do just that. Atlantis plays through May 5 at Virginia Rep’s November Theatre. For Showtimes and tickets, go here.

Read more about Matthew Lee Robinson, one of the creators of Atlantis, in this article from Joan Tupponce in Just Joan: RVA Storyteller.