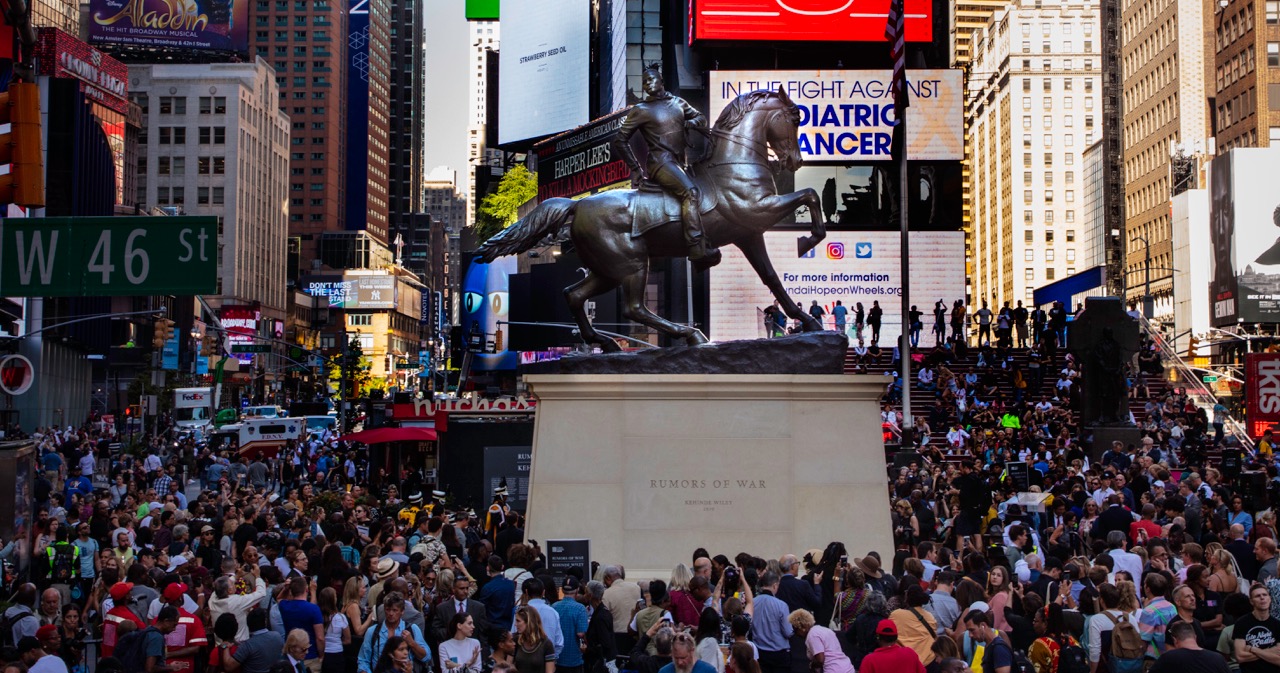 Virginia Museum of Fine Arts (VMFA) will celebrate the permanent installation of Kehinde Wiley’s sculpture Rumors of War on Dec. 10, at its entrance on historic Arthur Ashe Boulevard in Richmond, Virginia. The unveiling will begin at 3:30 p.m. and is open to the public.

Go here for program information, including parking and shuttle service.

The program will include remarks by Kehinde Wiley; The Honorable Ralph Northam, Governor of Virginia; The Honorable Levar Stoney, Mayor of the City of Richmond; Alex Nyerges, VMFA’s Director and CEO; Dr. Monroe Harris, VMFA’s President of the Board of Trustees; and Valerie Cassel Oliver, VMFA’s Sydney and Francis Lewis Family Curator of Modern and Contemporary Art and Sean Kelly, founder, Sean Kelly Gallery. The event will begin with a performance by Richmond’s All City High School Marching Band, featuring students from high schools across the city, and conclude with a reception for the public in the museum’s Cochrane Atrium, with live music and refreshments.

First unveiled in Times Square, New York on Sept. 27, 2019 as a partnership between Times Square Arts, Sean Kelly Gallery and the Virginia Museum of Fine Arts, Rumors of War is Wiley’s first monumental public sculpture and largest work-to-date, continuing the artist’s career-long investigation into the politics of representation, race, gender and power.

Mounted on its large stone pedestal, Rumors of War is the artist’s direct response to the ubiquitous Confederate sculptures that populate the United States, particularly in the American South. Standing at just under three stories tall, Wiley’s sculpture depicts a young, African American figure dressed in urban streetwear and sitting astride a massive horse in a striking pose based on the equestrian monument to Confederate States Army general James Ewell Brown “J.E.B.” Stuart on Richmond’s Monument Avenue.

The inspiration for this work came when Wiley was visiting Richmond for the opening of his retrospective exhibition, Kehinde Wiley: A New Republic, at VMFA in June 2016. After encountering the city’s Confederate monuments, the artist felt compelled to extend his stay to study and reflect upon the sculptures and their legacy. “The story starts with going to Virginia and seeing the monuments that line the streets,” Wiley stated at the unveiling of the work in Times Square on September 27, 2019. “But it’s also about being in this black body. I’m a black man walking those streets….What does that feel like to walk a public space, and to have your state, your country, your nation, say this is what we stand by? No. We want more. We demand more. We creative people create more…And today we say yes to something that looks like us. We say yes to inclusivity. We say yes to broader notions of what it means to be an American.”

Rumors of War encourages visitors to consider broader perspectives on traditional narratives of heroism and representation in American history, culture, and with national monuments. In the early 2000s, Wiley created a series of paintings entitled Rumors of War, which explored a repositioning of the iconography of wealth and warfare in historical paintings. The largescale works in this series anachronistically replaced the traditionally white, aristocratic subjects typical of the genre with young, African American men in street clothes.

VMFA Director and CEO Alex Nyerges states, “The installation of Rumors of War at the Virginia Museum of Fine Arts is a pivotal and historic moment for our museum, for the Commonwealth of Virginia and for the city of Richmond. We hope that the sculpture will encourage public engagement and civic discussion about who is memorialized in our nation and the significance of monuments in the context of American history. We are especially pleased that through the acquisition of this work, the monuments in Richmond will further reflect the incredible diversity of its population.”

Wiley is perhaps best known for his portrait of President Barack Obama and his vibrant portrayals of contemporary African American and African-Diasporic individuals that subvert the hierarchies and conventions of European and American portraiture. Seeking to challenge the lack of representation of black and brown men and women in our dominant visual, historical, and cultural narratives, Wiley’s subjects have ranged from street-cast individuals that the artist encountered while traveling around the world to many of the most important and well-renowned African-American cultural and political figures of our generation, including The Notorious B.I.G., LL Cool J, Michael Jackson, Carrie Mae Weems, and President Barack Obama.