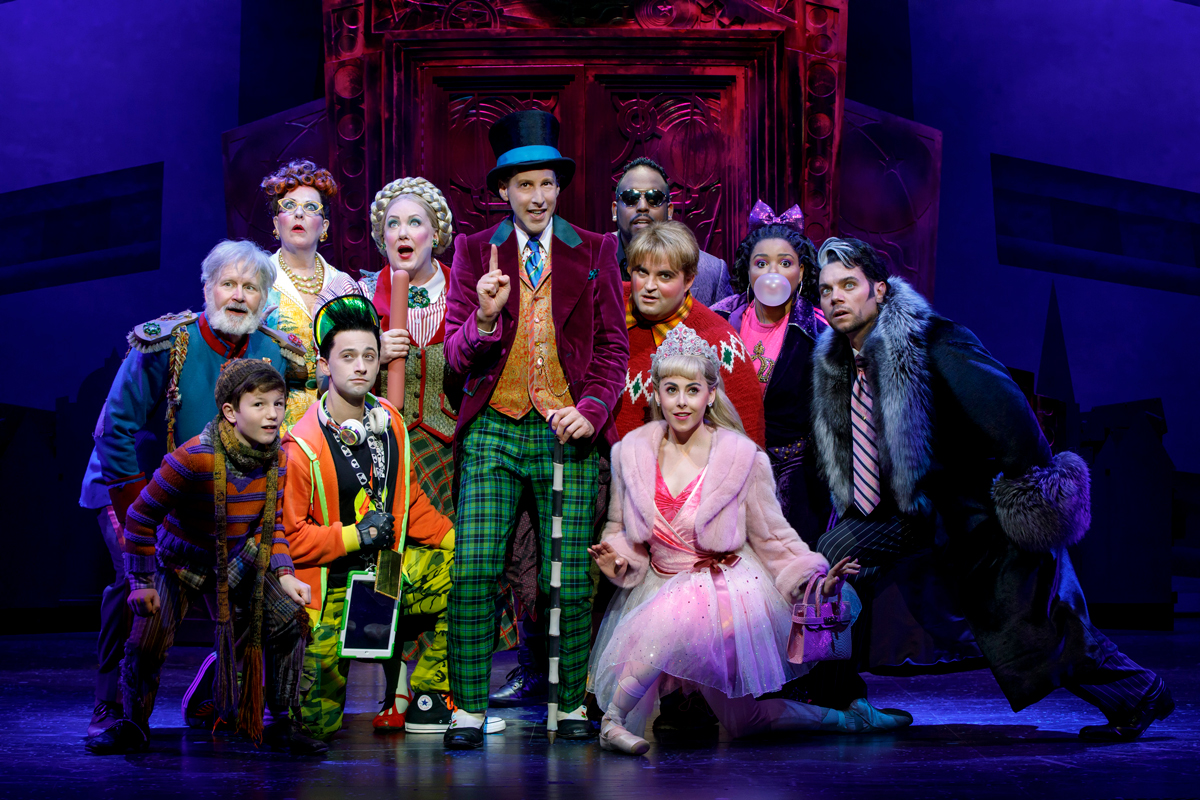 If you think you know the story of Willy Wonka and his chocolate factory, you’ve seen the two incarnations of movies, and you’ve read the book, put all of that aside for Broadway in Richmond’s presentation of Roald Dahl’s Charlie and the Chocolate Factory, on stage this week at Altria Theater in Richmond.

The show begins with Willy Wonka (played whimsically by the show’s understudy, Benjamin Howes, at Wednesday evening’s performance) rollicking through the opening number, “The Candy Man.” Wonka then disguises himself as the candy shop owner, determining if there is still relevance in the candy world for his infamous chocolate. Until he comes up with a brilliant plan, with the help of a young Charlie Bucket, (played by 11-year-old Rueby Wood at this performance) to reopen the doors of the Wonka factory, Wonka is pondering retirement, but wants to leave the factory to a new breath of fresh air.

When hearing of the re-opening of the factory to the public, young Charlie is desperate to win one of the treasured Golden Tickets, especially after seeing four of the five tickets gobbled up by a hilarious Bavarian Augustus Gloop (Nathaniel Hackman), the bratty Russian Veruca Salt (Jessica Cohen), the entrepreneurial gum-chewing Violet Beauregarde (Brynn Williams), the video junkie Mike Teavee (Daniel Quadrino), and their over-zealous parental units. The introduction of each of these winning parties were outrageous numbers of their own, but certainly gave some new twists to the quirky tale.

Charlie wins his last-minute Golden Ticket after purchasing the Wonka bar from a street-hustling vegetable vendor, and he exuberantly recruits Grandpa Joe (James Young – who you can read more about here in Just Joan) to accompany him on the sweet adventure of a lifetime. All of this closed out the first act as the families enter the factory with a renewed Willy Wonka.

The second act opens with all the winning guests tumbling through the looking glass entrance of the Wonka Factory, and the show really starts to take off. While each of the spoiled children meets his or her doom by demanding more, more, more (Augustus getting sucked into the chocolate river, Violet gobbling the Wonka test-gum and turning into her giant blueberry self, Veruca becoming a bad nut (accompanied by giant ballerina squirrels, and Mike getting sucked into a video universe and shrinking to a size that Mrs. Teavee carried away in her purse), only Charlie remains, proving his worth in honor to win the grand prize of taking over the Wonka factory. But you know all that…

What you don’t know, and you won’t know until you see the show (their photos are not even in the show’s program), is the masterful way the performance creates the kooky Ooompa Loompas. These mischievous watchers of the back of their caretaker, Wonka, literally steal the show, popping up during their historic introduction to the audience and throughout each child’s clever demise. Their outrageous looks and show-styles are certainly not what you would expect, but they were the hit of the show.

Overall, Roahl Dahl’s Charlie and the Chocolate Factory pays great homage to Dahl’s book and both movies – starring Gene Wilder and Johnny Depp – but then, takes a modern-day approach throughout the tale. Howes’ Wonka is very reminiscent of Wilder’s Wonka, and young Wood’s portrayal of Charlie as the poor kid who wins it all will warm your heart. Overall, the show is a wild ride of special effects and the magical performance of this twisted tale will fully melt your heart in its finale. The entire cast makes you fall in love with each of their characters, and the orchestra was perfectly pitched throughout. Be sure you take a bite and see this chaotic frenzy of pure imagination.

At two-and-a-half hours including intermission, the show is recommended for families with children ages six and up. Roahl Dahl’s Charlie and the Chocolate Factory from Broadway in Richmond runs through Sunday, September 22, at Altria Theater. For showtimes and tickets, visit Broadway in Richmond.