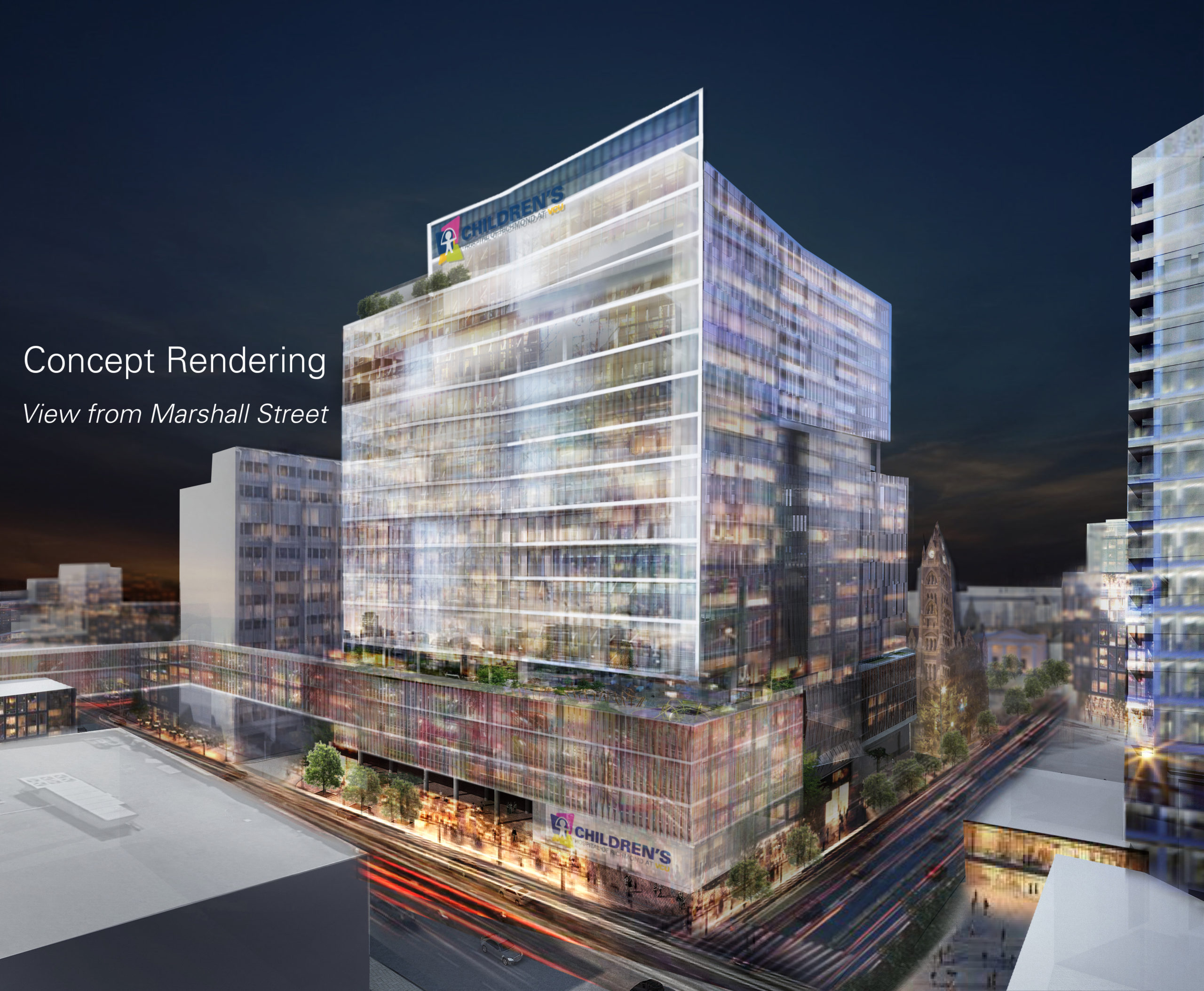 Officials at Virginia Commonwealth University Health System and Children’s Hospital of Richmond at VCU today announced plans to build a new inpatient children’s facility that will be adjacent to the outpatient Children’s Pavilion on the VCU Medical Center campus in downtown Richmond.

The project will complete the Children’s Pavilion as a comprehensive, integrated health care facility exclusively for children’s inpatient and outpatient care. The new facility will replace the existing pediatric inpatient unit with private rooms and also will provide new operating rooms, imaging capacity, emergency services and family amenities — all dedicated to children and their families.

“The completion of the Children’s Pavilion with a new inpatient hospital will provide an exclusively child-centered environment as advocated by patient families, our own pediatric team and regional children’s health care providers,” said Michael Rao, Ph.D., president of VCU and VCU Health System.

The project is part of a strategic commitment by the ChoR, VCU Health System and its board of directors to be a national leader in children’s health — and to be ranked in the top 20 by 2022, Rao said.

“All children deserve the very best care in a welcoming environment that meets the unique needs of each child and their family,” said Marsha Rappley, M.D., CEO of the VCU Health System and senior vice president for health sciences at VCU. “A comprehensive Children’s Pavilion that is designed in partnership with children’s health care providers from across the region and state, as well as with families, will give all children a focus of hope during what may be the most difficult journey of their lives.”

The new children’s hospital is part of a comprehensive plan to address the needs of the community and the state, becoming a destination for children and their families seeking exceptional health care as well as a destination for research and educational opportunities.

“As a cancer survivor and beneficiary of life saving care and research at VCU, I am especially pleased to welcome VCU’s continued investment in children’s care,” said Del. Delores McQuinn, a member of the House of Delegates whose district includes the counties of Henrico and Chesterfield and the City of Richmond. “Our children deserve the best we have to offer both in terms of care and experience — and that is just what this new facility will provide for the entire region.”

Del. Jeff Bourne and Sen. Jennifer McClellan, two state lawmakers whose districts encompass VCU’s medical center, jointly stated the benefits of the new hospital to the Richmond area: “As parents of young children, we are very pleased to hear that VCU is enhancing its already excellent pediatric environment by further integrating inpatient and outpatient care for kids toward national standing as a top children’s hospital.”

Richmond Mayor Levar Stoney cited the importance of the children’s hospital for the entire region. “Providing access to world-class health care for every child, no matter their zip code or ability to pay, is the right thing to do,” he said. “Building this new facility will not simply expand our growing healthcare economy — it will improve the lives and health outcomes for our children. We are proud to be home to VCU and applaud its progressive, mission-centered patient care.”

The facility is expected to cost more than $350 million and will include 86 licensed beds plus six observation beds relocated from the Main Hospital, with the capacity to increase to about 125 beds in the future. The new facility will continue to be operated under the VCU Medical Center hospital license.

“The community has long awaited a hospital exclusively dedicated to the care of children,” said Keith Derco, M.D., retired founder of Associates in Pediatrics and CHoR community liaison. “The plan to build such a facility will ultimately unite our community and allow CHoR to enhance their ongoing efforts along the path of growth and success that I have watched over the last decade.”

Bruce Rubin, M.D., chair of the Department of Pediatrics in the VCU School of Medicine said, “CHoR already is nationally recognized for our programs. This new children’s hospital — built just for the care of children and their families — will join with our award-winning Children’s Pavilion clinic building as the best in the commonwealth. This will help elevate the care to a new level and will be instrumental in attracting the nation’s greatest talent to CHoR in our quest to be among the top 20 children’s hospitals in the United States.”
Since VCU Health System and Children’s Hospital joined in 2010 to form CHoR, the Children’s Hospital Foundation has committed more than $90.7 million to CHoR for recruiting world-class specialists, establishing multiple specialty programs and increasing pediatric research.
“From the beginning, our dream and goal has been to help bring the top pediatric specialists to one place, the Children’s Hospital of Richmond at VCU,” said Coleman Wortham III, chair of the Children’s Hospital Foundation. “This new children’s inpatient hospital attached to the very successful outpatient pavilion advances that dream to reality. This is a wonderful day for all children in Richmond, across the commonwealth, and beyond.”
“CHoR has had tremendous growth in key areas of people, programs and places over the past decade,” added CHoR CEO Elias Neujahr. “The new inpatient facility is the next phase of delivering on important promises to the state and our community to provide the best care for Virginia’s children and families, which we are doing with the invaluable help of Children’s Hospital Foundation.”
Kim Hassmer, a member of the CHoR Family Advisory Network, said she and other parents are more than excited about the new hospital and what it will mean to their families: “It’s just such an overwhelming sense of we’re getting there. To be able to have all of those resources accessible in one place is going to make life as a mom of a complex ‘kiddo’ 10 times easier,” she said.

Site preparation is underway to demolish the former Children’s Pavilion building on E. Marshall Street, between 10th and 11th streets. Construction is anticipated to be underway this spring with substantial completion at the end of 2022.

About VCU and VCU Health: Virginia Commonwealth University is a major, urban public research university with national and international rankings in sponsored research. Located in downtown Richmond, VCU enrolls more than 31,000 students in 217 degree and certificate programs in the arts, sciences and humanities. Thirty-eight of the programs are unique in Virginia, many of them crossing the disciplines of VCU’s 11 schools and three colleges. The VCU Health brand represents the VCU health sciences academic programs, the VCU Massey Cancer Center and the VCU Health System, which comprises VCU Medical Center (the only academic medical center and Level I trauma center in the region), Community Memorial Hospital, Children’s Hospital of Richmond at VCU, MCV Physicians and Virginia Premier Health Plan. For more, please vcu.edu and vcuhealth.org.

For more on outpatient care at Children’s Hospital of Richmond at VCU’s Children’s Pavilion, go here.