If there’s a good time to be had, you’ll find it at the State Fair of Virginia, coming Sept. 24 through Oct. 3 to The Meadow Event Park in Caroline County.

Music lovers can expect to hear a variety of hip-hop, bluegrass, Christian rock, country and alternative-rock artists as part of this year’s State Fair live concert series. All shows begin at 7:30 p.m. and are included in the cost of fair admission. 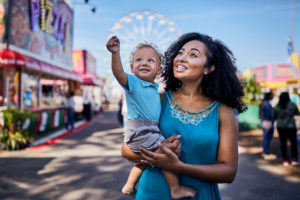 Kicking off 10 evenings of music is C+C Music Factory on opening night, Sept. 24. With chart-topping hits including Gonna Make You Sweat (Everybody Dance Now) and Here We Go (Let’s Rock & Roll), the group has earned 35 music awards worldwide, including five Billboard Music Awards.

American Pride—a Statler Brothers tribute—will take the stage with country and gospel music on Sept. 25, followed by The Crooked Road artists Ralph Stanley II and the Clinch Mountain Boys performing bluegrass and country on Sept. 26. Elvis fans can hear iconic rockabilly with Tribute to The King, featuring Taylor Rodrigues on Sept. 27. An alternative rock band from Cincinnati, Blessid Union of Souls, will perform its hit song, I Believe, and more on Sept. 28.

Caribbean pop and reggae group Baha Men will perform on Oct. 2. Catapulting to success in the early 2000s after the release of their hit Who Let the Dogs Out, the group has won multiple awards, including a Grammy Award for Best Dance Recording.

Closing out the fair’s concert series on Oct. 3 is country singer Riley Green, who was named Academy of Country Music Awards New Male Artist of the Year in 2020. Green rose to success in 2018 after the release of his single There Was This Girl.

“We’re excited to have an outstanding lineup of musicians and entertainers,” said Marlene Jolliffe, the fair’s executive director. “The main stage will be located to take advantage of the large grassy hillside, providing ample seating and a spread-out footprint.”

Roving entertainment will include Hilby, the Skinny German Juggle Boy, known for his wacky comedy with a variety of props, juggling acts and stunts. Safari Sam and Oscar the Awesome Ostrich will stroll through the fair on stilts, amusing audiences with laughable antics.

The Revenge Roughstock Rodeo will entertain the whole family with professional bull riding, bronc riding and barrel racing. Fairgoers can watch the action at 7 p.m. on Sept. 27 and Sept. 28.

Other new attractions include Scott’s Crazy Comedy Magic Show, during which magician Dale Scott will provide a mix of magic, illusions, comedy and audience participation. The Flying Cortes Trapeze Show will include gravity-defying aerial stunts.

And what would be the fair without record-breaking produce? The giant pumpkin and watermelon weigh-ins will take place at noon on Saturday, Sept. 25, in the Blue Ribbon Tent. Seating will be available for those who want to see if this year’s growers can break state records.

Premium parking on the paved lot behind the Farm Bureau Center is available for advance online purchase. The parking passes are valid only for the day of purchase. General parking is free.