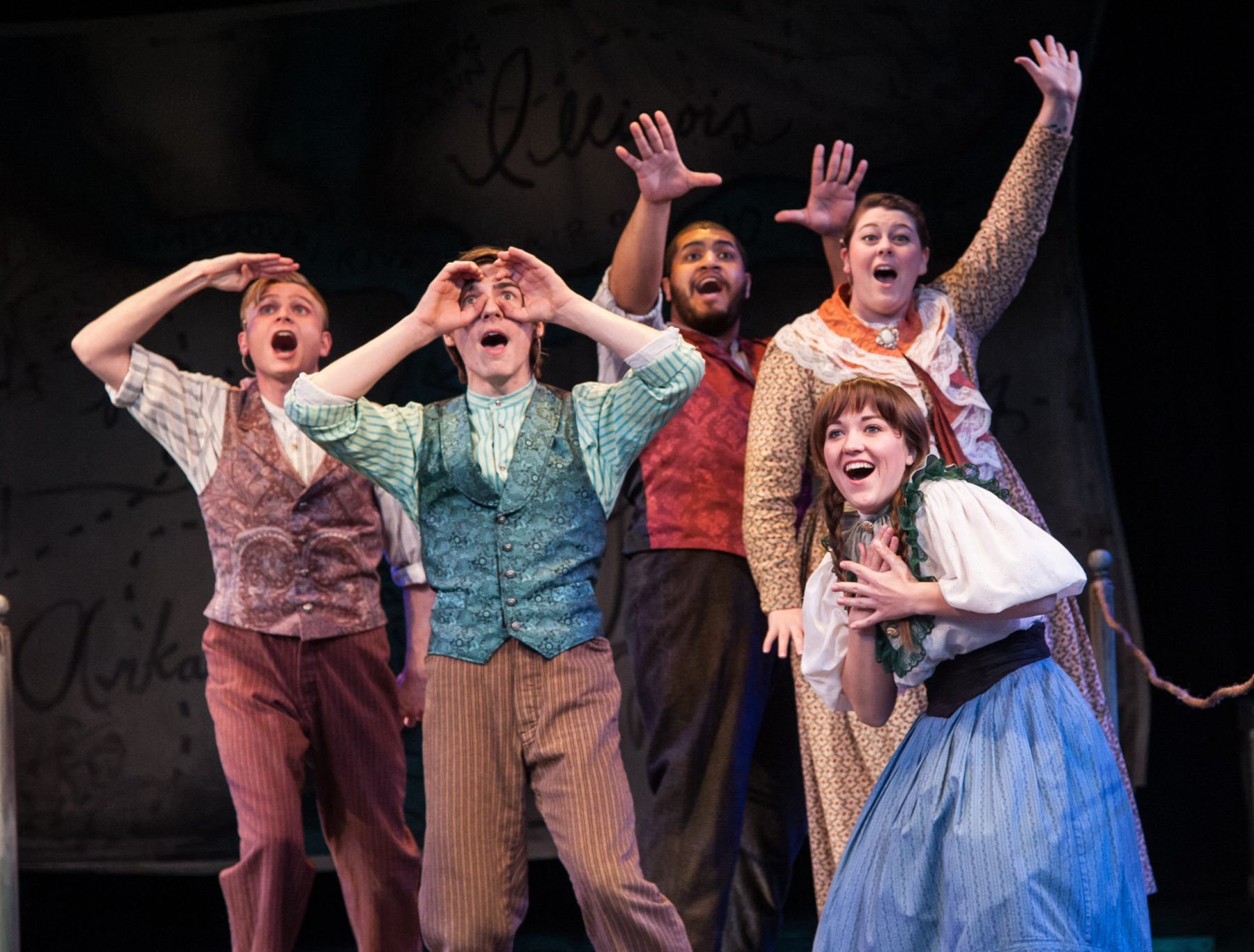 Perhaps you took your kids to some of the recent performances at the Children’s Theatre at Willow Lawn – like Pinkalicious or Knuffle Bunny– because they had fallen in love with the books and delighted in seeing them on stage, as my youngest did.

With Huck & Tom and the Mighty Mississippi, the Virginia Repertory Theater has flipped the script (pardon the pun). This time the performance is a highly entertaining, hour-long trailer for the Mark Twain’s The Adventures of Tom Sawyer and The Adventures of Huckleberry Finn, encouraging kids who have not yet read the books to give them a try.

The show begins by introducing Mark Twain and his classic characters and then traverses through several vignettes from each of the two classics. James Hendley and Joel White play Tom and Huck respectively with energy and warmth, portraying the slightly mischievous but loveable characters in a way that engages all young viewers. Alvan Bolling II has the depth needed to embody both the authoritative preacher and the Jim, the enslaved man who is determined to find freedom. With her beautiful voice and bubbly personality, Rachel Jones makes a perfect Becky Thatcher, Tom’s love interest, and Caitlin Sneed convincingly portrays the firm Aunt Polly, who seems constantly torn between loving Tom and wanting to smack him. Sound familiar?

Throughout the show, the river itself becomes a character and is featured in the titles of five of the six songs performed. As the actors remind us several times during the play, the river was the muse that inspired Twain, who could read stories in its mighty waters. While Richmond’s James River can’t compare to the mighty Mississippi, after seeing this performance, kids might be inspired to imagine some river stories of their own.

Huck & Tom and the Mighty Mississippiis ideal for elementary- school aged kids who will appreciate the humor of the fence whitewashing scene – and perhaps get some ideas about how to get out of their chores – while also understanding the seriousness of Huck’s dilemma as he ponders whether to help his slave friend Jim find freedom or obey what was then the law and turn him in. The show is a history lesson brought to life on stage and will encourage young readers to pick up Twain’s books to find out what else happens to these relatable characters.

The performance is perfect for the whole family, though. Your younger kids may not fully grasp the challenges Huck and Jim face on the raft, but they will certainly enjoy the fast-paced stories and fun, foot-stomping music. And you will enjoy the show both for the compelling performances and the nostalgia of watching the stories that filled your imagination when you were a kid.

Huck & Tom and the Mighty Mississippi is on stage at the Children’s Theater at Willow Lawn until March 3. For showtimes and tickets, go here.