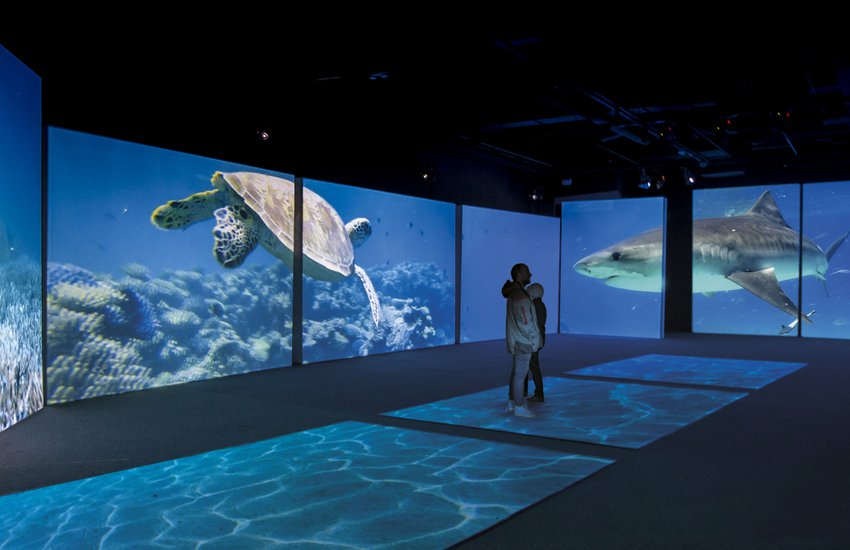 My latest adventure around town was taking my two girls to visit Planet Shark: Predator or Prey, the new exhibition at the Science Museum of Virginia. Along with the exhibition, the film Great White Sharks has returned to The Dome theater. I love having an exhibition and film to accompany as  it allows you to choose your own adventure as you dive into the world of sharks. 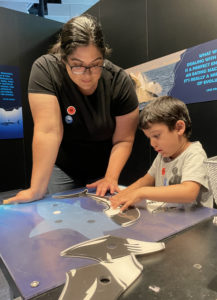 We chose to start in the dome exploring Great White Sharks, a 45-minute film that dives  into the world of sharks, their truth, mythology, and struggle against extinction. Prior to viewing the film, I’m not sure how much thought I had generally given to sharks as a species, other than the numerous movies featuring them as the villain. The narrator points out that sharks have been mythologized and feared because of our lack of proximity to them which limits our understanding, and has allowed fear and lack of respect for them to grow.

After the film, we continued on our journey to find the exhibition presented in the Dewey Gottwald Gallery. I don’t think I’ve ever experienced an exhibition in that space before, so I forgot how to get there. We wandered a bit (which is a treat at the Science Museum) before realizing it’s located at the back of Boost, past the water bottle sculpture. 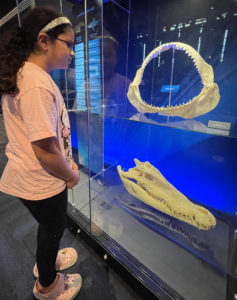 Around the next corner the focus shifts to how humans have historically experienced sharks up close and personal or through the lens of the media. In this section, titled Media Hype, you’ll find a large wall of news articles of shark attacks adjacent to movie memorabilia from the most notable shark movie Jaws.

As you continue through the exhibition there are interactive screens that take you through the various species and evolution of sharks, a crayon-rubbing station for littles so they can take home an image of they’re favorite type of shark, and a station where a volunteer has real artifacts from sharks that you can touch. 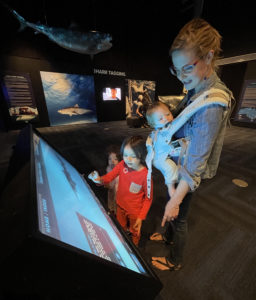 In the last part of the exhibition, there are more replicas of different shark species along the wall, and the level of danger that they may present in interactions. There are also shark cages that you can grab great pictures in, and safety gear that divers wear to swim with sharks. The last part also turns to advocacy around sharks and how they are exploited for humans as food, and for use in medicines and beauty products.

When you leave the exhibit, it should be with a new sense of wonder and possibly, less fear around sharks. It is so interesting that my younger daughter wants to return, and I’m okay with that. Next time, however, we’ll do the exhibit first and the movie last in the curation of our adventure.

Taekia Glass is the co-director of the Mending Walls project and operations guru for her husband Hamilton Glass’s work in transformative art. Her love of the arts, young people, and community keeps her actively engaged in creating connections among friends and colleagues that inject new energy into Richmond. Taekia is the the of mom of two brilliant and active daughters.