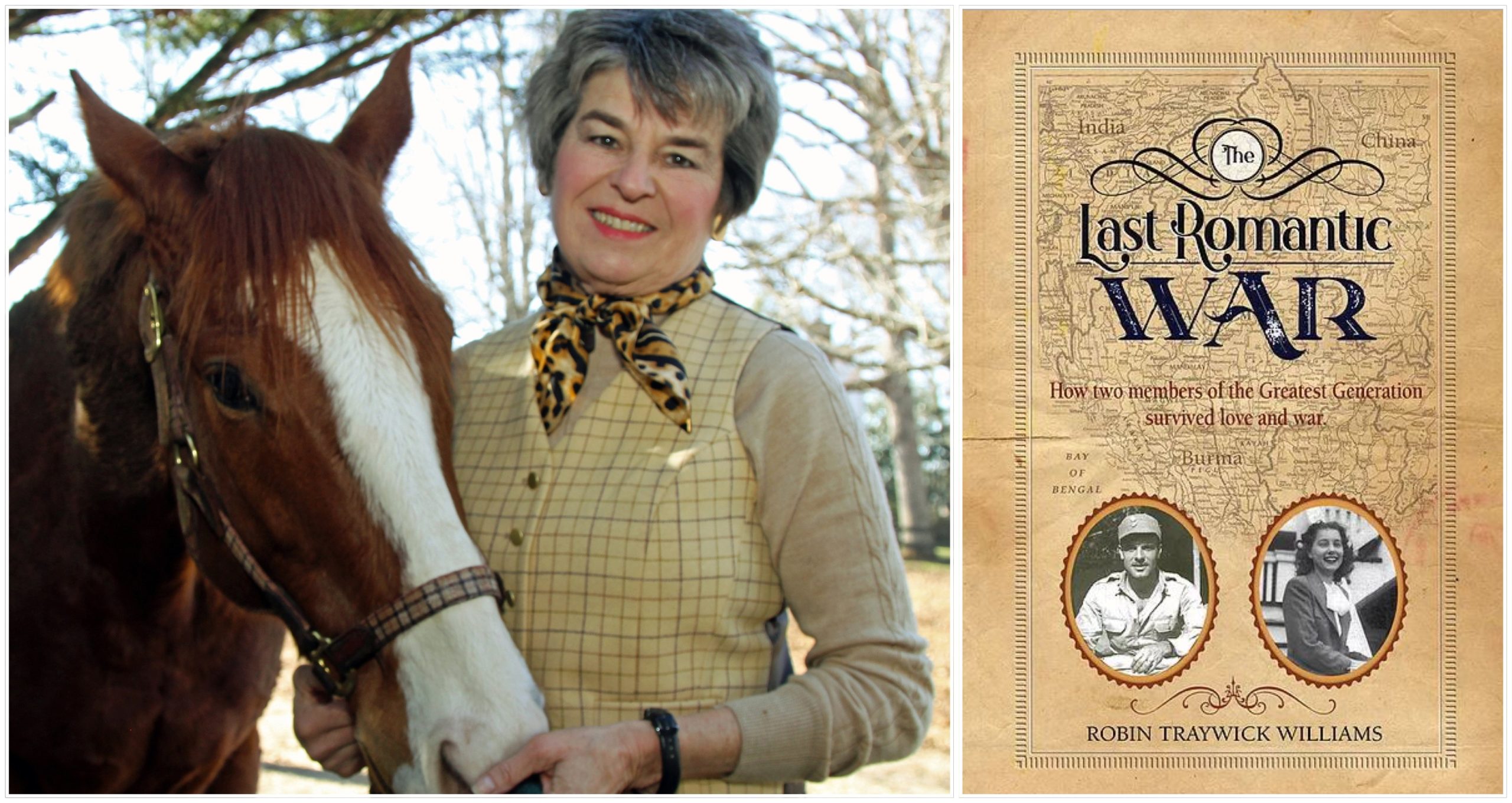 I wish I was more of a history buff, but since I’m not, I can honestly say that reading a true story about World War II wasn’t high on my must-read list for the summer. Fortunately, one local author found a wonderful way for us non-history readers to thoroughly enjoy learning more about the wartime days – weave a love story around it!

Robin Traywick Williams’ latest book, The Last Romantic War, is a bio-memoir about her family in World War II. Her extensive research and the acute details she shares from the many conversations she had with her father about his time in the war taught me so much about this important time in our nation’s history, I truly feel compelled to write her a thank you note.

As Robin explains in the book’s preface, she was always fascinated by her father’s many stories of the war and his time in the Burma Campaign in 1944. Eventually, she started recording their conversations, and when she pulled those tape recordings out years later, along with her mother’s many scrapbooks from those years, she had the framework for The Last Romantic War. Robin also read every book she could find on the Burma Campaign to help fill in the details of those treacherous months her father spent overseas. Then she began writing.

We first meet Robin’s father, Bo Traywick, who grew up in South Carolina, at the Officer’s Club in Fort Benning, just months after the 1941 Japanese attack on Pearl Harbor. With the United States preparing for war, the 24-year-old captain, the youngest captain by far in the entire U.S Army, agrees to go on a blind date as a favor to a fellow lieutenant. Bo was immediately taken with Flo Neher, a Lynchburg native and freshman at Hollins College, pretty and quick witted, with a full social calendar and no shortage of suitors. Their whirlwind courtship and quick engagement looked promising, but alas, the marriage was not meant to be, at least not yet.

The book follows the two on their separate paths, Bo traveling to Burma to fight in the war, and Flo remaining in the states, leaving college for the working world, and punching her dance card with many men who longed to make her a bride (and some who later didn’t make it back from the war).

The vivid descriptions of Bo’s time in Burma, from the near-misses from attacks, grenades, and the like, to the blood-sucking leeches, the bouts of malaria and dysentery, and the lack of food, sent a shiver up my spine on more than one occasion as I read the detailed accounts. Robin’s descriptions of Burma’s geography were equally impressive, and I could almost picture the mountains, rivers, and jungles as I read along.

The pictures and maps that Robin gathered and shared throughout the book really made it feel like I knew her family, and it made the many losses of life in the war even more sad (I won’t share who, so as to not spoil it).

In the end, love wins, of course, and every reader will surely have a whole new appreciation for and even deeper admiration for all those who have ever fought in a war.

Thank you, Robin, for putting so much time and effort into telling your family’s story, and thank you to Bo for your service to our country and to Flo for waiting for him.

The Last Romantic War is available at Book People in Richmond, and Changing Reins in Ashland, through the publisher Dementi Milestone Publishing and on Amazon.

A livestream author talk can be viewed here.