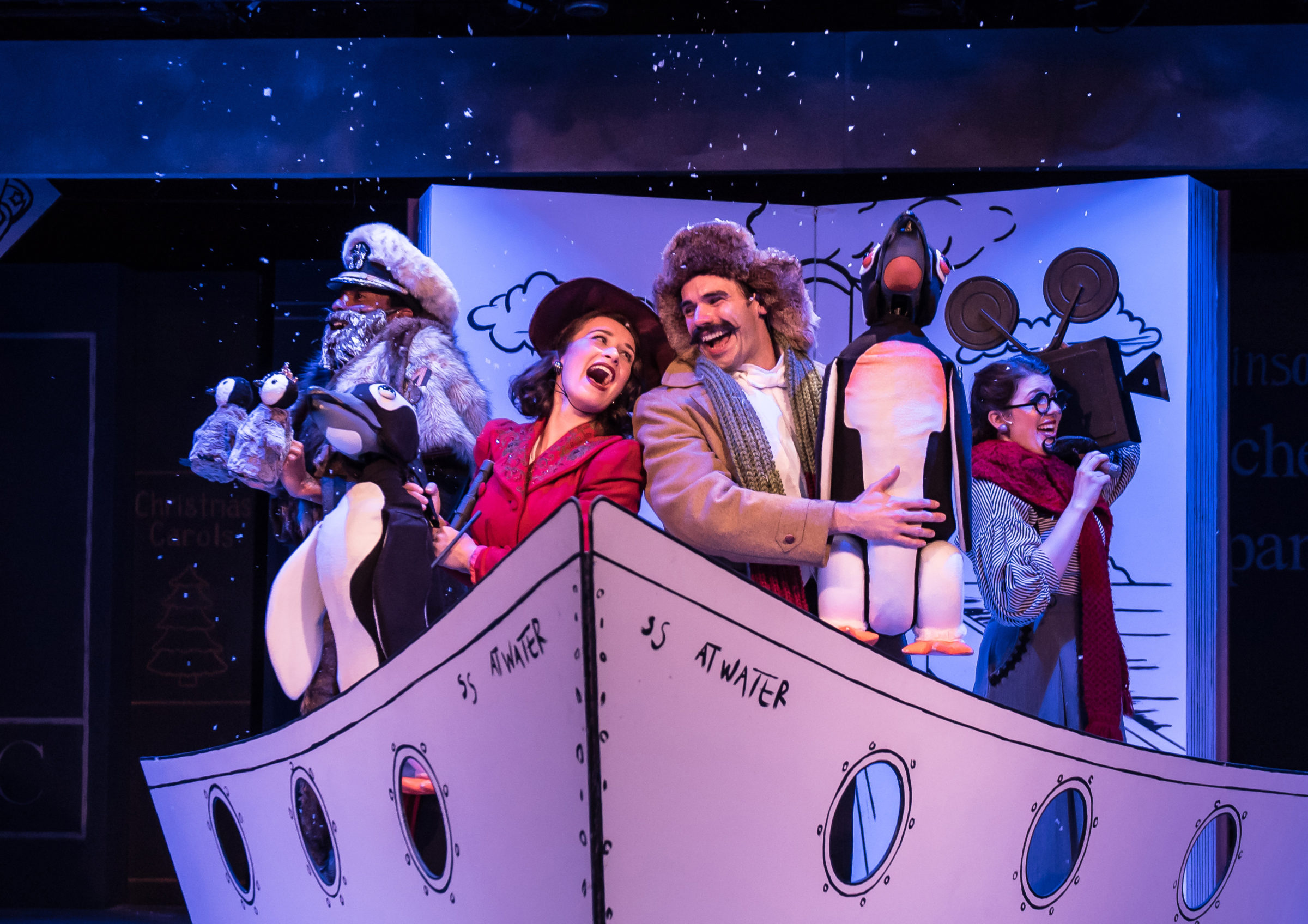 I absolutely love penguins! Perhaps my feelings stem from twelve years of schooling with nuns still in habits and a sister who also wore the black and white of her order. Or maybe it’s from Ron Cey, a beloved third baseman of my favorite Chicago Cubs, who was nicknamed The Penguin by his teammates. Whatever the reason, I developed a lasting fondness for those waddling creatures of Antarctica. So when Virginia Rep revealed its 2018 lineup for The Children’s Theatere at Willow Lawn, I knew we’d be in attendance with our three age-appropriate grandkids. Mr. Popper’s Penguins delighted us all!

Based on the children’s book of 1939 by Richard and Florence Atwater, this musical captivates the audience with its lyrics, dancing, and imaginative movement of the penguin puppets. 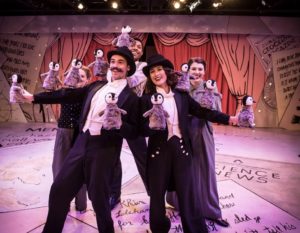 Derrick Jaques and Renee McGowan are perfect as Mr. and Mrs. Popper, the Stillwater couple who are gifted a male penguin by a famous radio personality and polar explorer, Admiral Drake. Mr. Popper, a housepainter who dreamed daily of travel and adventure, had written a fan letter to the Admiral and was promised a surprise in return. And what a surprise it was! Named Captain Cook for another famous explorer, the penguin endears himself to the Poppers who do their best to transform their home into an appropriate environment for their feathery guest. Their modified icebox is his bedroom. Nevertheless, he becomes despondent and the couple acquires a companion, Greta, from the local aquarium. The birds bond quickly and soon Greta lays an egg, then another and another – until there are ten new mouths to feed on Popper’s meager earnings. Searching desperately for a solution, a thought pops up: Train the penguin family to perform and hit the road.

Popper’s Performing Penguins are an immediate success, but the routine is exhausting for all involved. When some unfortunate mishaps occur, Mr. Popper lands in jail and it’s Admiral Drake who comes to the rescue when he arrives to see the popular show for himself. He arranges Popper’s release and offers him the opportunity of a lifetime – a visit to the North Pole. The play ends with Mr. Popper returning his temporary family to their natural habitat in Antarctica and looking forward to an amazing adventure.

The staging and musical direction, in addition to the choreography and superb performances by the supporting cast, bring Mr. Popper’s Penguins to life. The audience is so entranced by the creative sets and adept maneuvering of the puppets by the ensemble, that they lose themselves in the imaginary world of entertainment.

Keaton Hillman, Emma-Clair Polich, and Eve Marie Tuck are outstanding in the varied roles they perform, from emitting penguin chatter to singing, dancing and acting. The lyrics are often lost on the youngest members of the audience, but no matter, they are totally enthralled with the performing penguins. In the whispered words of my 7-year-old granddaughter, “They are adorable.”

If you’re looking for a parent and child date, a Thanksgiving treat, or a delightful holiday outing for your youngsters, Mr. Popper’s Penguins is the ticket. The hour-long production is perfect for ages four to eight, but I can assure you, the show is a fun outing for all ages. The grandparents enjoyed it almost as much as the kids!