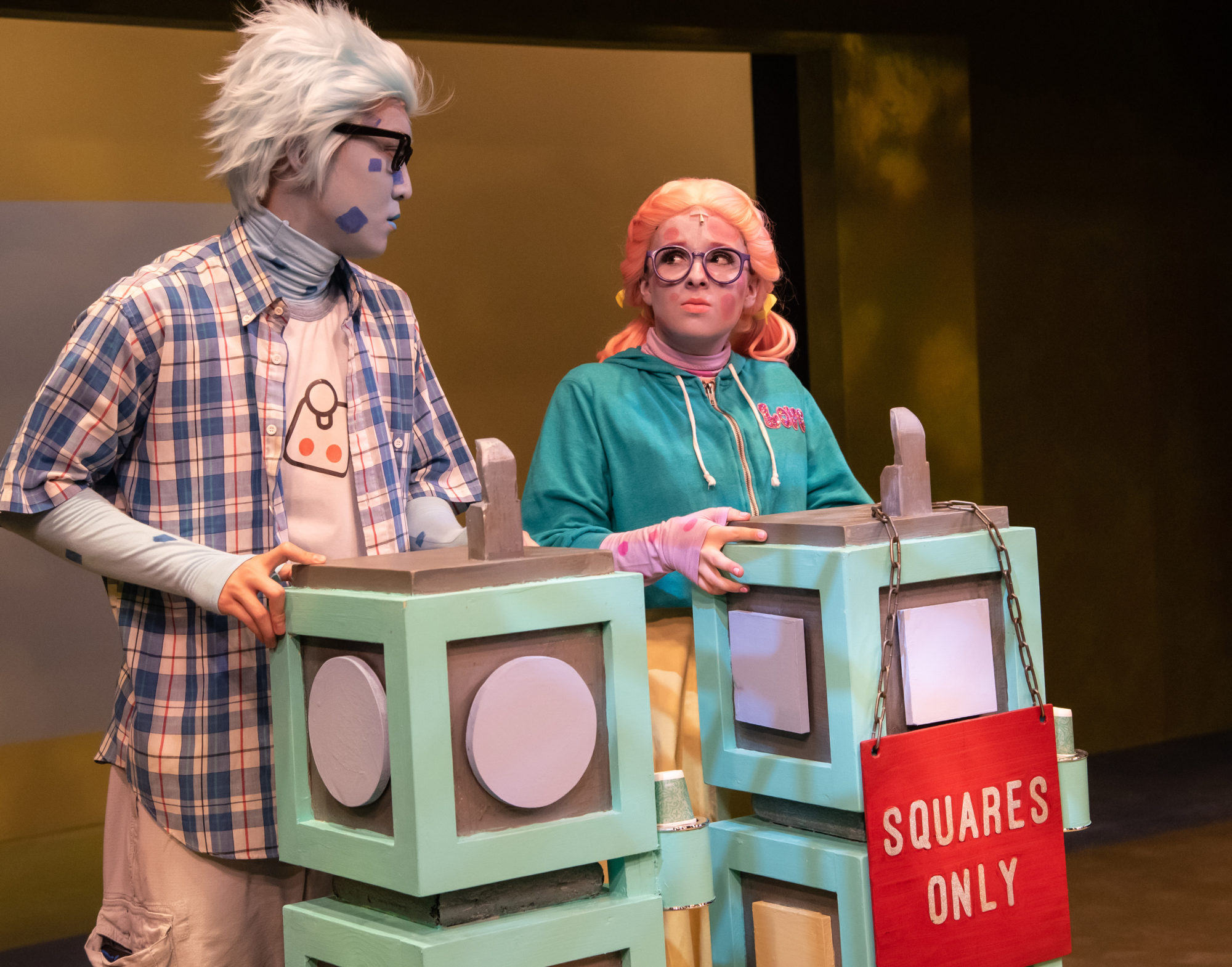 When I first heard about Virginia Repertory Theatre’s new children’s musical, Polkadots: The Cool Kids Musical, I was curious. How could they pull off a show about racism and inclusion with characters distinguished by shapes on their skin without being either cheesy or pedantic and heavy-handed?

It seems a daunting task, but the show, directed by Jan Guarino, who also directed Busytown, is fun and energetic while also thought-provoking, addressing heavy issues in a way a young audience can easily relate to. And the kids definitely did relate to the show; throughout the hour-long opening performance, they engaged enthusiastically with the actors, cheering along with the good moments and gasping at the bad.

Polkadots: The Cool Kids Musical is inspired by the events of the Little Rock Nine, the first African American students to attend Little Rock Central High School after Brown v. the Board of Education in 1954 ruled that segregation in public schools was unconstitutional. Rather than retelling that history, the musical tells the story of a pink, polka-dotted girl, Lily Polkadot, who moves to a new town and attends a school where all the other kids are—and always have been—Squares. The teacher, Mrs. Square, encourages the other students to accept their new and different classmate. One of the students, Penelope Square, initially refuses to accept change and bullies the young girl because of her physical differences. The other student, Penelope’s younger brother Sky, feels confused. How can he reconcile his fondness for this polka-dotted girl with his family’s insistence that Squares and Polkadots shouldn’t be friends?

The cast of Polkadots: The Cool Kids Musical consists of only four actors, all of whom are making their debut performances with Virginia Repertory Theatre. Caroline Lynch plays the 8-year-old Lily Polkadot with pep, sincerity, and impressive vocals. Although she plays the young girl adorably and convincingly, she carries herself with more maturity than I would have expected from a recent high school graduate (St. Catherine’s just last month). Her beautifully delivered “Sticks and Stones” is a perfect anthem for any kids dealing with classroom bullies.

Quan Chau charms as the sweet, goofy, uncertain Sky, who struggles to figure out whether to pursue friendship with Lily, whom he finds interesting, cool, and, according to his entertaining solo, “Beautiful.” Sky has been pushed around by his big sister for so long he struggles to feel confident making his own decisions, but, over the course of the performance, he finds a strength he never knew he had. Chau’s ability to meet his young audience at their level makes him the perfect character for kids to empathize with; most kids can relate on some level to his desire to do the right thing. The chemistry between Lily and Sky is excellent, and they rock the stage with their high-energy dance performance, “The Squadat.”

Madeleine Witmer fabulously portrays the mean girl who is so self-absorbed she makes her teacher wait while she finishes her phone call. Like all the best theater villains, though, Witmer plays the evilness of Penelope Square with humor and self-deprecation, and her talent shines through in her solos. She also manages to pull off a genuine, poignant transformation at the end of the show.

Sydnee Graves portrays the teacher Mrs. Square with grace, providing a model of kindness for her students and the audience. Mrs. Square is perhaps the most complicated character; she works to encourage inclusion among her students while simultaneously enforcing the rules of squares-only water fountains. Graves plays Mrs. Square sympathetically, though, revealing the conflicted feelings the teacher experiences.

The lesson of Polkadots: The Cool Kids Musical is clear: We may look different on the outside, but we are all the same on the inside. Guarino, who also directed Busytown, has developed dynamic performance with minimalist scenery and monochromatic colors that pop, and choreographer Mallory Keene has created high-energy, fun performances that keep kids engaged.

Suggested for ages five and up, the show handles complex topics like racial tension in an entertaining, engaging performance, with role models kids will want to emulate. Polkadots: The Cool Kids Musical will be on stage at Virginia Rep’s Children’s Theater at Willow Lawn through August 11.

For showtimes, tickets, and more information about performances for audiences with visual impairments and sensory challenges, visit Virginia Rep.

FacebookTweetPin
advertisement
Back To Top
×