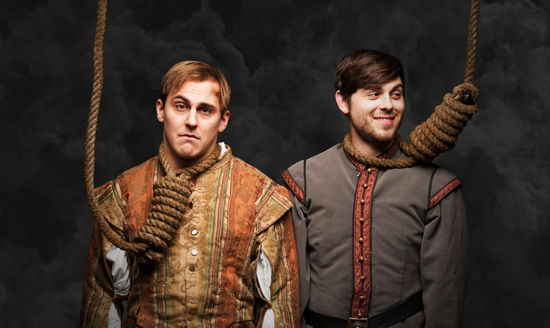 Those who found Waiting for Godot just a bit too plotless and Hamlet just a bit too wordy will adore the premise, writing, and execution of Quill Theatre’s Rosencrantz and Guildenstern are Dead, Tom Stoppard’s mid-century reframing of the Shakespearean classic.

Undeniably a work of absurdist theatre, the show may take warming up to for newcomers to the subgenre. The first twenty minutes will surely have you asking, “Wait – this is scripted, isn’t it?” because the leading pair deliver lines with the ease, abandon and non-sequiturs of two philosophers who may have had one too many.

As he opens the show with Stoppard’s lengthy rumination on probability and its relation to fate, Adam Turck’s Guildenstern will simultaneously aggravate and endear you. He is earnest, arrogant, and almost pitifully anxiety-ridden – the perfect juxtaposition against a plot that is … well, basically non-existent.

If you’re unfamiliar with the show, Guildenstern’s counterpart Rosencrantz comfortingly represents the audience, being tugged along haplessly through the plot without the slightest idea of what the end will bring. But Tyler Stevens’ Rosencrantz is more than a dummy or a sidekick; he offers a foil to Turck’s purposefully eager presence, breaking the fourth wall with boyish smirks and a childish pragmatism.

It’s hard to review absurdist theatre because by definition, it is counterintuitive, confusing, and not traditionally satisfying. However, I walked out of the theatre having both enjoyed a play and ruminated on the act of storytelling itself, which I believe Stoppard intended and the Quill cast delivered on. The classics are great, but sometimes our world seems so absurd, we need performances to match.

This show is appropriate for high schoolers and up, and will be enjoyed most by those familiar with the plot of Hamlet or curious about absurdist theater.

Rosencrantz and Guildenstern are Dead from Quill Theatre is showing at the Gottwald Playhouse at Dominion Energy Center through February 16. For showtimes and tickets, go here.