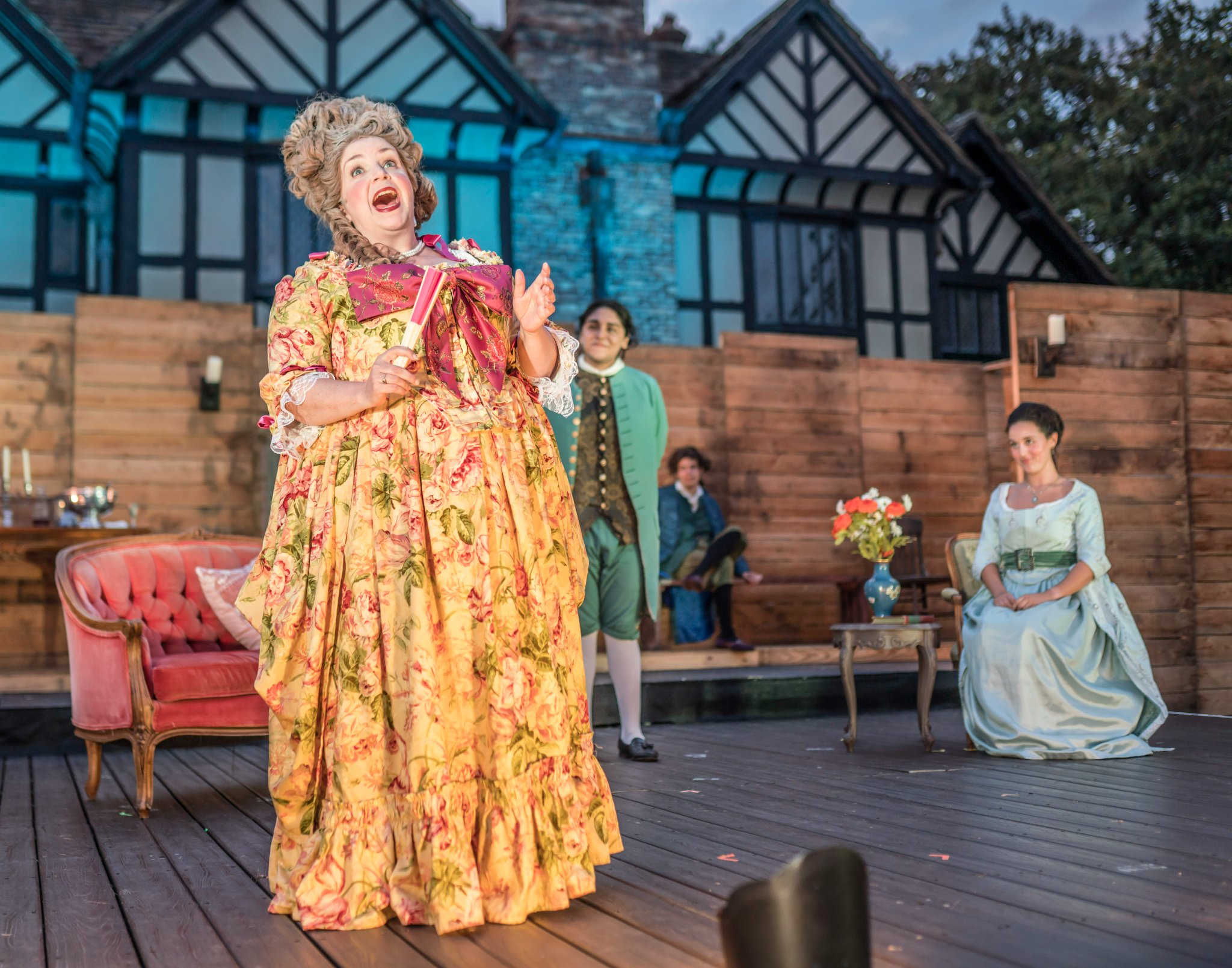 A new stage has been set for the Richmond Shakespeare Festival on the back lawn of Agecroft Hall, the Tudor manor house that was built in the late 15th century in England, and in the early 20th century, dismantled, crated, and transported across the Atlantic to be rebuilt in what is now a suburban neighborhood.

If you haven’t found your way to the the Shakespeare Festival over the course of its twenty-plus summers, this is the year.

Not only is this the perfect way to experience classic theatre, but She Stoops to Conquer, the play that is being staged now, is an English lit favorite that isn’t Shakespeare at all – which, if you ask me, is code for “easier for the average theatre goer to understand.”

Further cementing this play’s accessibility, Director James Ricks says,  She Stoops to Conquer, “was the play that I saw in middle school that set my entire being on fire with the thrill of live theatre and the world of possibility it opens up, thus removing all uncertainty about my future.”

Full of hijinks, pranks, and scenarios of mistaken identity, She Stoops to Conquer from Quill Theatre is very funny and very well-acted. First performed in London in 1773 and one of the few plays from the 18th century that is still regularly performed, this classic is regarded as a comedy of manners. The comedy arises from the gap between the standards of behavior the characters regard as proper in polite (or upper-class/rich) society, versus more informal behavior they indulge in in less constrained (or lower-class/poor) company.

Following the romantic entanglements of young people and their parents who are trying to marry off their progeny, the show features a cast of beautiful people in gorgeous costumes (special shout out here to Cora Delbridge). Richmond stage standout Debra Wagoner, who has worked in regional theatre for more than thirty years, shines as Mrs. Hardscastle in her first performance with Quill Theatre. VCU graduate Katy Feldhahn also lights up the stage as Kate, daughter of the Hardcastles. As Constance, Calie Bain, is equally delightful. William Cardozo, another VCU graduate, is superb as Hastings. Joshua Mullins’ depiction of Hardcastle ne’er do well son Tony Lumpkin is a comedic treat.

In a somewhat unconventional move, I’m giving Mark Persinger, who plays Mr. Hardcastle, a dual commendation for acting and diction. The sound for the show was suburb, but as it was an outdoor production, all of the actors were in competition with the evening chorus of crickets at Agecroft (part of the charm of the performance). Dialect coach Harrison Runion also did a wonderful job of guiding actors in annunciation and accents that were just English enough, but not overwhelming.

Performed in two acts with an intermission, She Stoops to Conquer is a delightful comedic classic. The natural backdrop of Agecroft Hall makes it a perfect date night or outing for theatre-loving families with kids in middle school or older.

As the second and final production of the Richmond Shakespeare Festival at Agecroft Hall, She Stoops to Conquer from Quill Theatre runs through July 31. For showtimes and tickets, go here.

Summer nights in Richmond are unpredictable to say the least. Of course, weather is a factor, and there are other questions related to the outdoor stage at Agecroft Hall.

Do I need to bring my own chair? Yes, the newly constructed stage is on the back lawn of Agecroft Hall, where you’ll have a wonderful view of the James, the summer sky, and Quill’s performance of She Stoops to Conquer. It also allows guests to social distance between other parties (even though it’s outside, this is still a consideration).

Is seating general admission, and what time should I arrive to get a good seat?Seating is general admission. Gates open at 6 p.m. Blankets*, chairs, and small coolers holding picnic items are permitted. You can picnic on the grounds before the show, or arrive closer to showtime at 7:30 p.m. and eat in your seats (we did this) or on your blanket in front of the stage. Umbrellas, tents, tables, and other shelters are prohibited in general lawn seating. In this new lawn setting, you can also enjoy snacks and drinks during the show without interrupting the performance for your neighbors.

*If you’re bringing a blanket, arrive extra early and set up in what you would think of as the front row and allow chairs to fill in behind you. The majority of guests were in chairs.

What if it rains? Decisions about postponing or cancelling a show due to weather will be made before 7:00 p.m., depending on weather forecasts.

Should the show be cancelled at any point prior to intermission, tickets may be rescheduled for a future performance during the 2022 Richmond Shakespeare Festival. Tickets can be rescheduled by calling the Quill Theatre Box Office at (804) 340-0115, Wednesday through Sunday from 2:00 p.m. to 6:00 p.m.

Are there concessions on the grounds? There is a concession stand, which sells soft drinks, waters, and various snacks before the show and at intermission. King of Pops was also on the grounds the night we saw the show. 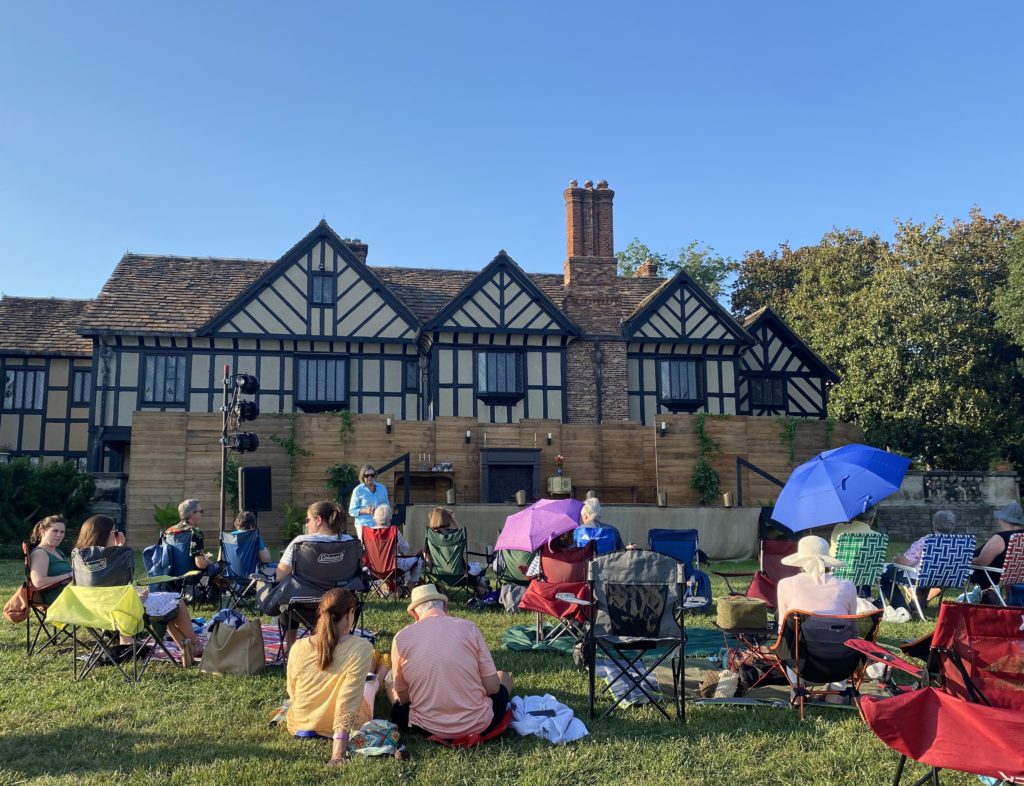