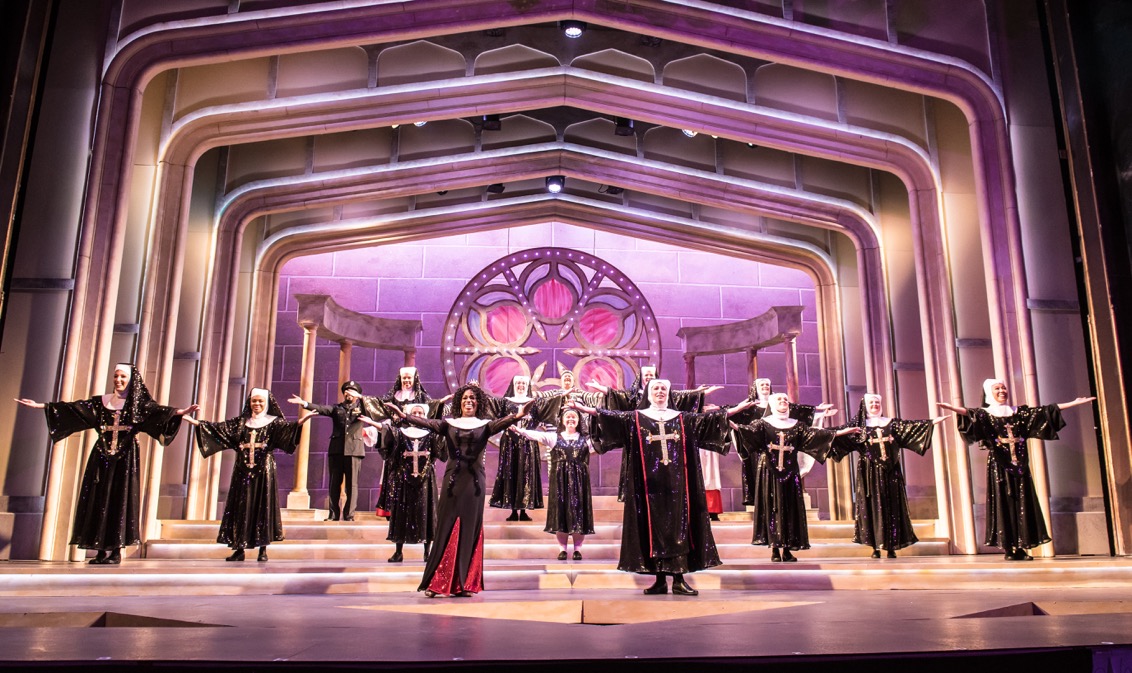 Virginia Rep’s Sister Act deserves nothing less than a resounding hallelujah! From set to music, from talent to sheer entertainment, this holiday offering hits every note perfectly.

Living up to the highly popular film of the same name with iconic performances by Whoopi Goldberg, Maggie Smith, Kathy Najimy, and Mary Wickes is quite an undertaking, but it’s one that Virginia Rep takes on with energy, sass, and a knockout cast.

The story revolves around fallen showgirl, Deloris Van Cartier, who accidentally witnesses a murder at the hands of her boyfriend and his three not-so-clever thugs. In order to harbor her until the trial, the police hide her in a convent where Deloris is totally out of place. Even though it looks dismal for Deloris when she arrives, the convent turns out to be the place where she finds peace, sisterhood and love.

Director and choreographer Robin Arthur has really outdone herself on this production. She’s cast the show with triple-threat actors with the chops to pull off any song expertly. Her staging of the large cast never feels cramped or heavy handed. In fact, it creates the illusion that you’re watching the show in a much larger venue.

The outstanding cast carries through every dance with ease and precision. Vocally, the cast is strong in talent and delivery.

With such a large cast, it’s difficult to single out every performance but standouts need to be mentioned. Gwynne Wood (Sister Mary Robert) and Kelsey Cordrey (Sister Mary Patrick) put their own sparkle into roles that were so memorable in the film. Their humor and crystal clear vocals leave you wanting more.

Sincée Daniels, who plays Curtis, Deloris’ shady ex-boyfriend, and Durron Marquis Tyre who plays police officer Eddie, who would like to be Deloris’ current boyfriend, give memorable performances. They both bring depth to their characters.

Susan Sanford (Sister Mary Lazarus) has one of the most hilarious songs of the night, and she pulls it off with ease and lots of funk.

Andrea Rivette plays Mother Superior who is not keen on having Deloris at the convent. Her portrayal is honest and very convincing. And, her vocals are heavenly.

Just like Whoopi Goldberg in the film, Felicia Curry who portrays Deloris, captures your attention and your heart from the first scene. As Deloris, she’s feisty, funny, and genuine. Her performance shines, filling the theater with energy and excitement. She’s a force that swoops in and leaves you breathless. And her vocals: Amazing! She’s a star.

This show wouldn’t have had the same oomph that it does without the intricate and realistic set designs of Ron Keller that make you feel like you are in the actual convent. Sarah Grady’s lively, colorful costumes are a hit, giving dimension to the characters. Her innovative quick-change costume for Eddie is a standout.

While you may not think of Sister Act as a holiday show, it definitely fits the bill, especially if you value friendship, camaraderie, acceptance, and community. And isn’t that what this season is all about? When you add in the sparkle and glitter onstage and the lighthearted religious fun, you have all the ingredients for a holiday show. Make sure this family show is on your calendar. You don’t want to miss it. Can I get an Amen?

Recommended for about twelve and up due to some adult themes and dramatic crime violence (implied and not seen).